I fell in love with a DIY IKEA-hack kitchen banquette last summer.
And I haven't been the same since.

This past weekend, it all came together.


And as Lindsay's banquette post suggests, it's not a hard hack.

Here's how I put mine together:


I laid 2 primed and painted 2x6x8's like a railroad track on the floor.


Luckily, the floor vent is far enough away from the wall to lay the tracks around it.  Which will allow for airflow under the banquette.


Then I laid the first cabinet on the tracks.


With all three cabinets in place, it felt awfully deep. 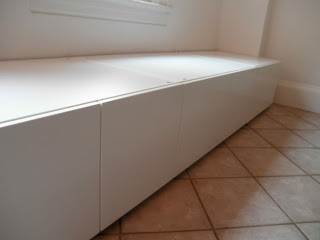 But I knew the shallower cabinets were waaaay too shallow.  So I put the temporary cushion on and kept the faith.


I'm keeping it real here.  That was our kitchen for a few days.  I was cringing.

Then came the cushion.


I found an outdoor fabric called Spectrum Graphite by Sunbrella that almost perfectly matches the 'Grimmy's Grey' Dulux paint on the kitchen cabinets.  I love the unity it brings to the room.


The foam itself is a firm 4" thick piece covered in batten to perfectly fit the length (96") and width (24") of the cabinets.  To give it a polished look, I asked the upholsterer to add piping...and since I have kids, I asked for a zipper in case I need to remove and wash it.


I gave it a test drive by hosting a coffee with 8 of my closest girlfriends today, and they loved it.  Four lovely ladies fit comfortably on the banquette and stayed for a couple hours.  Success.

So...how about some fun Before and After pics.

My view walking into the kitchen from the main hallway:


And from the dining room:


If you haven't noticed, the highchair is gone.  There's something about the gorgeousness that's keeping George's throne in the dining room.  I roll it in for feed time and then roll it back when he's done.  Highchairs are just not gorgeous.

But George is.  And I managed to keep him out of every banquette shot.

Except for this one.


I think he's happy to get his toy corner back.


** Thank you to Lindsay for her amazing inspiration found here **
Posted by Meg {lovingalbany} at 10:05 pm 8 comments:

Email ThisBlogThis!Share to TwitterShare to FacebookShare to Pinterest
Labels: kitchen

I got busy this weekend.  And I don't mean with the kids.

I crossed off a straggler on my to-do list.

We went from this:


To something a little more sparkly.


I didn't expect to walk out with a mirror when I was at the Homesense in Ajax, but I couldn't help it.  It was not only beautiful, but the right price, too. 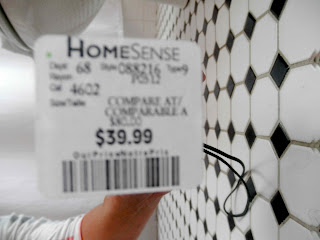 Back to the old mirror.  Steve has had it with him for years.  He grew up with it at his mom's house (in the foyer), brought it with him to apartments in Toronto and New York City (in the bedroom), and it's still with him here at home (in the bathroom).

It was time for an intervention.

So, weeks after the purchase, I finally got to hanging.  That's life with 3 kids.

I grabbed tools, picture wire and opened the back of the box.


Funny enough, my handyman idol (step-father-in-law) and I were just having a conversation about how hard it is to hang pictures or mirrors when only using D-Rings.  How precise you have to be.  Measure a million times and then measure again just in case.  Of course this would happen to me.  Now.  With this mirror.

So I measured a million +1 times and went to work. With my favorite drill and favorite Togglers. 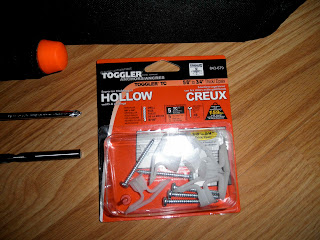 FYI: Toggler doesn't pay me for my crush.

First, I removed the old mirror. 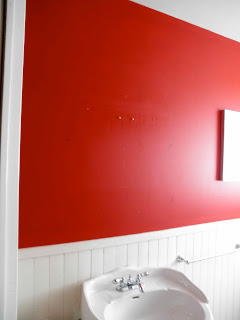 Then I drilled a hole and inserted the toggler. 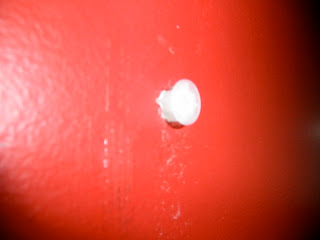 And then I tapped it into the wall, popped the back open and started screwing. 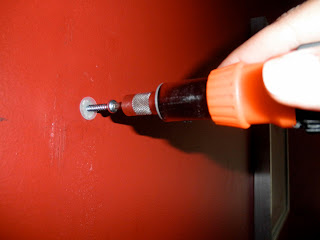 After both screws went in, I hung the mirror (with Steve) and held my breath.


Then came the moment of truth.


Bubble in the middle.  Level.  Amazing.

So I took a few more pictures for some fun Before & Afters:


Let's see some more of the bathroom...shall we?


I really like how the bevel frame reflects light all over.  It helps having the big canvas of a white shower curtain across from the mirror.  Perhaps I'll go a little crazy and get a pattern or design?


My only -ick- feeling is that maybe it's too low.  It's centered perfectly above the sink.  But having lived with it for a day, and Steve saying "does it feel a little low?", makes me think I might have to nudge it up.


Too much wall space above?  Too close to the wainscoting?  Wrong sized picture (on the right) not helping the visual balance?  I don't know.  I'm not sure.

So instead I'm just going to live with the sparkly for now and smile every time I walk in the bathroom.

Email ThisBlogThis!Share to TwitterShare to FacebookShare to Pinterest
Labels: bathroom

So this summer is our last investment in it.  We're hoping a little paint job from College Pro will take us through at least 2 more summers.

Of course, my before pics didn't capture the one angle that's obviously the most improved after 5 minutes of work.  So here's an old before:

But the most improved view is this:


I was going to paint the shed "Grimmy's Grey" like the kitchen cabinets, since this door leads out of the kitchen, but the white looks much cleaner and brighter and bigger.  With our deck being so narrow, I need all the help I can get.

Of course, I changed my mind after Mr. College Pro bought the grey paint.  So if I end up hating it -or it gets dirty & dingy too fast- the grey will be in the batter's box and I'll negotiate a kid-free Saturday morning to paint it myself.

The whole job should be complete in 2-3 days, weather permitting.  So with any luck, I'll have a whole gallery of before and after pictures next week.

Happy weekend!
Posted by Meg {lovingalbany} at 1:19 pm No comments:

Email ThisBlogThis!Share to TwitterShare to FacebookShare to Pinterest
Labels: deck

I can't help it - I still put everything in American terms.

So this past weekend was the first long weekend and unofficial start to summer....otherwise known to me as Memorial Day Weekend. 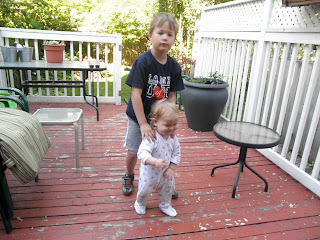 He was threatening to walk for a while.  But finally, at 15 months, on Mother's Day weekend, he took off.  And now he spends more time upright than on his knees. 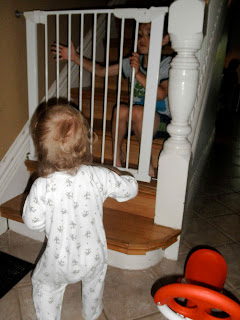 Welcome back to gate world at the Gardners.

We also had some Jake time, spent at High Park with a friend.


There's a bison in there somewhere.

Then some fun time in the backyard on the deck.


Jake's at the age where he won't smile for pictures.  The sillier the better.  So instead of fighting it, I just joined in. 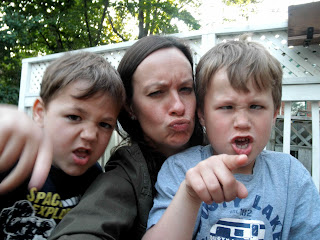 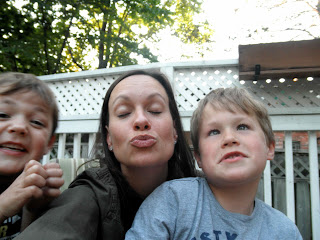 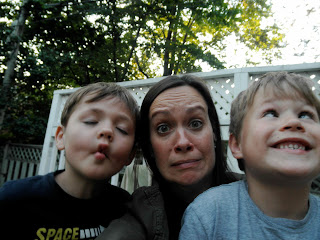 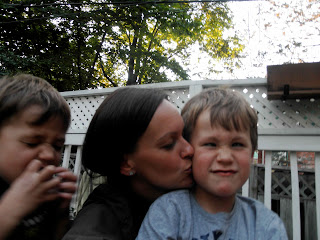 Then Monday was the holiday.  And Henry's special day. 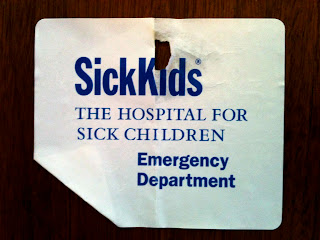 10:45am, Jake & Henry at the park with Steve while I'm sitting on back deck eating a sandwich as George naps.
SFX: Back Screen Door flies open

Jake:  Mommy!  Henry had a big wipeout on his bike and his chin is all bloody.
Me:  What?!
Jake:  He did.  Daddy told me to run up here and tell you.
Me:  Where are they?
Jake:  They're coming up the street.  Daddy is walking with Henry and his bike.

I run into the kitchen, soak 3 paper towels under the faucet and come outside to see an exhausted husband bent over a 12" bike and a 4 year-old holding a blood stained t-shirt to his chin.  One look and I knew we were headed for the hospital.


We got there by 11am, with only one child ahead of us.  The triage nurse confirmed what I feared.  The split was U-shaped, so glue wouldn't hold it closed.  He would need stitches. 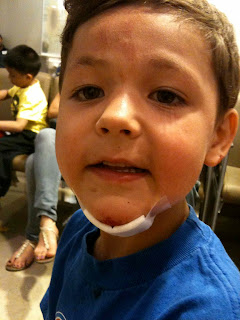 In good spirits, and more brave than scared, Henry was a trooper.  In the waiting room, he told me the story of how it happened.

He heard Steve tell me about doing a "Superman" off his bike.  Just the thought makes me cringe.


After the doctor gave him a thorough inspection -thank god he was wearing his helmet- the nurse cleaned up wounds on his elbow, hip, knee and chin.  She also applied a topical anesthetic to help numb his chin before a needle with more anesthetic & stitches.

With the movie RIO playing on the exam room tv, Henry was more than distracted.


Distracted AND exhausted, he fell asleep between stitch #2 and #3.  For this amazing feat, he was proclaimed "poster patient."  Only Henry.

After wonderful care, 4 stitches and a freezie, we headed home.  The bravery treats of choice were popsicles and potato chips.

Oh, and the promise of McDonald's.  Guess what we had for lunch today?