It's what I tell my kids all the time.  They are getting too big, too fast.  On Tuesday, I think I said it to Jake about 14 times.

It was his Kindergarten Graduation.


This is my absolute favorite shot because you can see Jake walking out and smirking, Steve (on the left) beaming and Jake's teacher looking giddy because graduation = summer vacation.

I can't do this post justice without saying how completely and utterly joyful I am that my kids attend the school they do.

We live in a different school's district.  One that is highly regarded and sought after.  Many out-of-district families try to get in - but can't.  Other people buy homes in our neighborhood just to attend the school.  So while there is nothing wrong with Palmerston P.S., it is French Immersion.  For us, English is our preference.  And with a wonderful all English school who's district ends one block East of us, I decided to apply for optional attendance at Huron P.S. when Jake was starting kindergarten.

And somehow -miraculously- got in.

So you could say I am a bit crazy with my love affair with Huron.  And it's principal.  And it's teachers.  Especially Jake's teacher...who is hands down THE BEST.

As confirmed by the end of year teacher gift bags I made:


The pictures were Steve's contribution.  Solidified by the fact that for the past two years (all of JK and all of SK), Jake was sure that his teacher and the kindergarten assistant were married.  He knew it!  He would tell me how Mr. Gillis's wife came and helped the class that day.  "Mommy, they're married, you know."

Anyhow, back to the ceremony.


It was a beautiful day, so the graduation took place outside in the reading circle.  You can see the child whisperer (aka: Mr. Gillis) on the left and his "wife", Ms. DaCunha on the right.


Here's Jake sitting next to his best friend in the world, Dar.

Jake was so happy.  I was beaming because he wore a nice shirt and didn't have holes in his knees.


Then after everyone received their diplomas, Mr. Gillis went inside to get popsicles.

Spain in The House

La lengua, la tierra, la comida...so it would only be fitting to put a little Espana in my cocina, no?

Here's where we last left off: 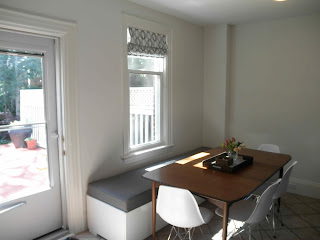 Desperately needing something on those walls.

After recently painting our first floor white and months of slowly giving our kitchen a makeover, it is obvious how much we NEED ART ON THE WALLS.  So Steve and I raided our stash of posters and prints that have been waiting patiently for attention.

We found a winner, got it framed and waited until the right time to hang it.


And my helper (who refused to nap).

You know what that means.  Throw things at him so I can work.


Hey, they're better than hot dogs or french fries.  (which he LOVES, by the way)


I had a few Togglers left, which I love to use.  I ended up going with two of them, not because one wouldn't hold the weight (it would, even with the poster having been framed with glass), but I thought the 27" width would be better supported by two screws. 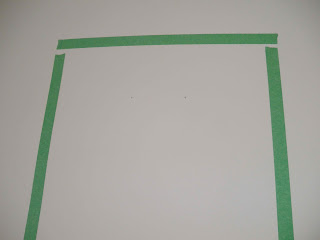 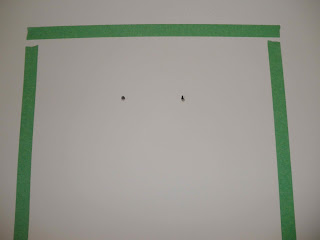 And got really scared.  The wall is lath & plaster over wood slats.  So when I drilled, the bit moved around a bit and slid slightly towards the ceiling...probably a seam between slats.  I crossed my fingers that the frame would hang straight even if the screws were off a bit.


It is a poster we bought in Sevilla on our honeymoon.  We took a tour of the bullfighting ring there and couldn't leave without buying a poster.  Every year, in every major city, there is an official poster announcing the fights of the bullfighting season. 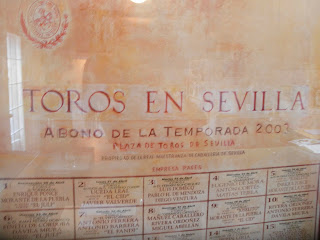 This is the one from 2003.  The year isn't special, we just liked the artwork.


And because I've had the honor of visiting my friend Maria in Spain so many times, I've actually seen some of the bullfighters listed on the poster, like Enrique Ponce.


And some of the bulls, too, like Miura.  Because Maria's family is involved heavily in bullfighting, I once got to go behind the scenes at a ring to see the Miura bulls in their pens.  They are enormous and deadly.  Literally.

Speaking of deadly, so is having this hanging in my kitchen.  Everytime I look at it, I just want to go back to Spain.  And given its size, it's kinda hard not to look at it...


But I love it.  So it's definitely a winner.

As for those other placeholders on the wall...


They are soon to be replaced with these...


I think I'm going to try painting the frames a red-brown color from the bull poster.  How's that for a punch of much needed color on the walls?  Most likely, kid artwork will fill the frames...once it passes inspection.

Email ThisBlogThis!Share to TwitterShare to FacebookShare to Pinterest
Labels: kitchen

I'm So Bad At This

Planning, organizing, facilitating.  All of these things I'm good at.

Designing, I realize, I am NOT.


Sorry for the bad iphone pictures...

For those of you that can see the above shots, I know I like the coral fabric in citron on the 20 x 20 pillow.  I just can't figure out the fabric for the 13 x 8.  My gut is saying #2 since the pattern compliments the drapes on a reverse.

But #3 does it's own thing and I'm drawn to the geometric shapes.

Steve already said he doesn't like #1, so that would be a hard sell.

This Project Took 8 Months Too Long

Yes, this should have been done in October with the completion of the basement renovation.  But then came some other kitchen fun and living room changes.

So here I am, 8 months later, taking care of business.  And I'm so happy with the results, I am kicking myself for not doing it in October.

Here's what I'm talking about.


The now defunct cold air return at the bottom of the main floor staircase.

Since we switched around the ductwork in the basement during the big dig & finish, we had to find a new spot for it.  So we did.  But were left with this.  Our HVAC guy's suggestion was to cut a 3/4 piece of plywood to the opening beneath the grill and spraypaint it black like the grill.  Easy!


I've never ever spray painted anything before.  But I've read plenty on other DIY blogs about the joys of it.


I think I got a little overzealous with the spraying.  It was thicker than it (probably) should have been.  But it went well for my first time and I only needed two coats.

Then I put it back in place.

Steve: "It will be even better when you spray paint the grill."


It's perfect.  And it took me no time at all.  Didn't even need naptime.  I literally put an arrowroot in George's hand and zipped out while he watched me through the back door.  I was back in the house before that cookie was gone.

So, here's my favorite part.  Before and after.

Yes.
Posted by Meg {lovingalbany} at 4:00 pm No comments:

When I went to West Elm for the living room rug, I didn't just stop there.  A 15% discount off anything I purchase?  I'll take one of everything.


It was on back order, but came in early.  I rushed over today.  And I'm in love.


This is my husband's kind of light level.


And this one's mine.

Now we don't have to fight about 40 watt or 60 watt bulbs.  We can just play rock, paper, scissors for how many pulls to yank.  Done.

We knew from the beginning of our living room project that the sorry little IKEA lamp had to go.  It was not right for the room.  And since our updating began, the pull got yanked a little too hard by one of the three kids here...so now the only way to turn it on is to feel around for the string that's tied to the metal arm and press down on it.  Not my fun.

Then recently, when I went online to look at pictures of a house up for sale in my 'hood, I noticed their living room was totally my style.  The coffee table is just what we're leaning towards for our living room.  Then I saw the floor lamp.  Winner!


Finding the lamp, loving the rug, and having a coupon for West Elm was total luck.  We decided they were both pieces we really like and would buy even if we didn't have a coupon.  But the discount was worth purchasing them now...with the understanding our money tree would be bare for a while.

So for now, I'm enjoying the view.


And thinking about some inexpensive DIY art ideas for that future fireplace wall.  I need something colorful and fun.  Mr. Floating Console still needs to happen, too.  That's Steve's thorn.

Until then, I'm ignoring all email coupons...
Posted by Meg {lovingalbany} at 2:48 pm No comments:

He liked to show everyone how loose it was. 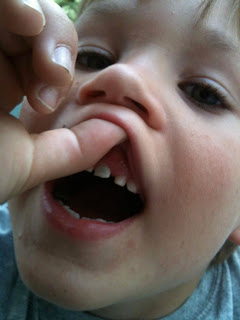 But did this when I said the tooth fairy should come that night. 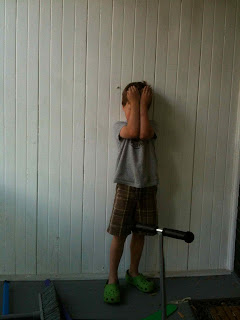 Then on Friday night, at his school's annual fundraiser picnic, this happened. 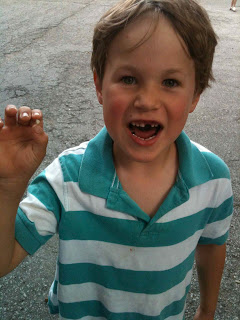 It's a hard look for me to get used to. 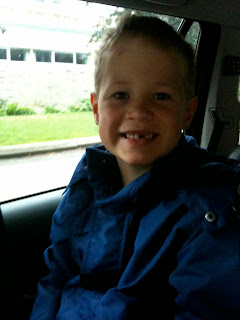 Posted by Meg {lovingalbany} at 2:14 pm No comments:

Over the weekend I received an email from West Elm for 15% off.


I've been thinking about a new rug for a while now.  I've been leaning toward something solid that wouldn't compete with the new curtains.  And neutral enough to stay as a backdrop to colorful artwork and pillows.  But beautiful enough to notice...that's the hard part.

So when my friend recently complemented our basement rugs...and then our designer-by-night suggested we repeat the basement rugs in the livingroom...I thought it was a sign.

The discount was my ticket.  Off to West Elm I went.


George was my helper.


I laid it out lengthwise first because the livingroom is an awkward size.


But there was too much floor showing on either side...and it accentuated the narrowness. 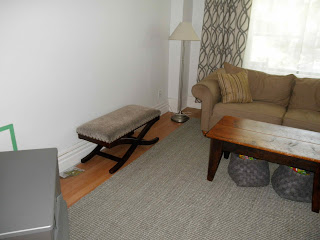 So I rotated it widthwise.


Which works out much better.


If anything, it might be too close to the wall, but the laminate has two ugly holes where the old mantle used to be.  So for now, I'd rather have the rug to the wall instead of looking at the holey-footprints.

The future plan for the livingroom includes a fireplace and built-in on either side.  So I'm thinking the rug would work lengthwise when that happens...or I will find another room where this rug can live.  And I will love it just as much as I do now...or more...

A few other before & afters:


That lamp is next.  Purely functional these days.


Once that console is gone and I have a floating cabinet system under the wall-mounted TV, I'll be a happy girl.

So here's my new view from the dining room.


It's the right color, soft on the feet and has already passed a few "uh-oh mommy" (read: dropped food) tests from the kids.