I took a ton of pictures.  But had trouble picking the best.  So I let instagram do it for me.

And not one is of a turkey. 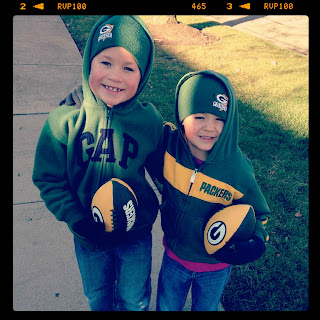 Our roadtrip from WI to upstate NY was by way of IL, where my brother lives.  On our way to the park, we dared to deck out in Green & Gold despite being in Bear Country. 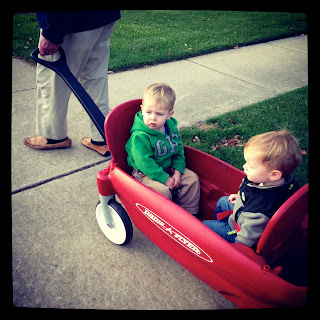 Later, the kids raked my brother's leaves.  Meaning no work was actually done.
(Evidence above) 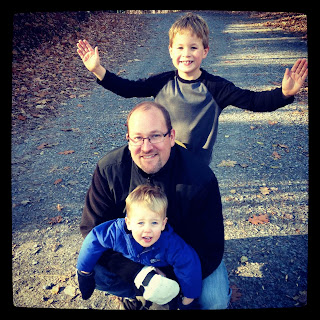 We drove from IL to Niagara Falls, where we met Steve.  After spending the night in a hotel, and gorging ourselves on TGI Friday's, we made it to the rental property on Cayuga Lake near Ithaca, NY. 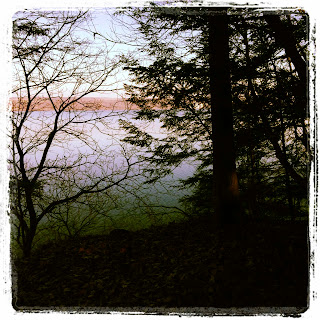 The view of Cayuga Lake from the backyard of the house. 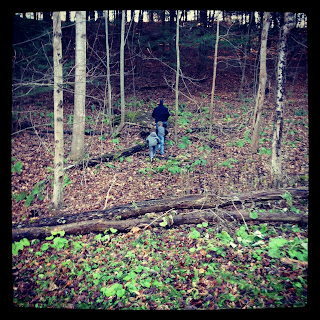 The big boys hiked around with Uncle Joe and managed to avoid stepping in poo. 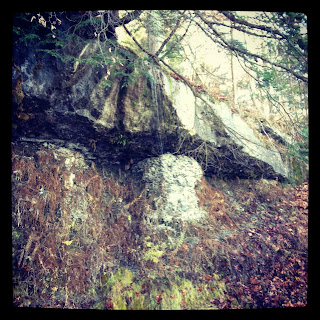 We braved the treacherous bridge, staircases and rocky shore to visit the lake daily.  In the Finger Lakes region, there are waterfalls everywhere.  One more beautiful than the next. 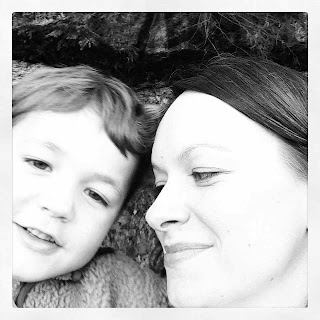 This was the best shot of my Henry from the trip. 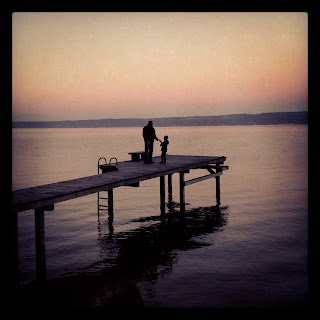 Well, this one with daddy on the pier is a contender, too. 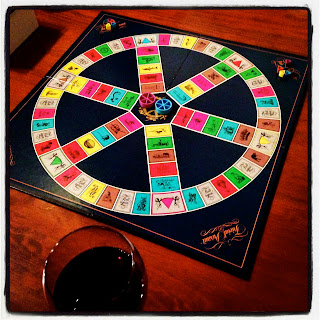 Our family can't get together without playing Trivial Pursuit, Men vs Women.  We even have a trophy.  It's engraved with every win. 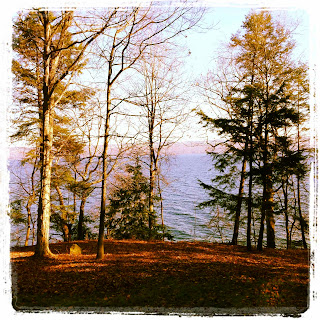 We woke up to this every morning. 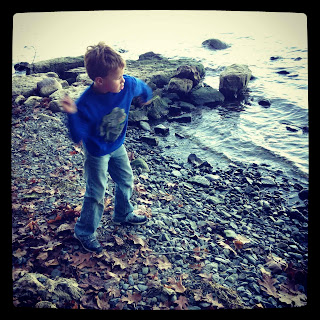 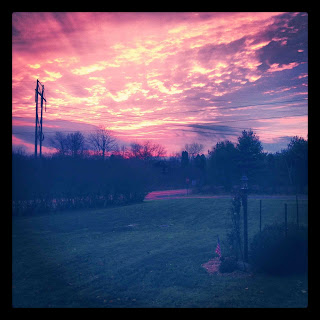 Our tradition is to have Chinese food for dinner the night after Thanksgiving at my aunt and uncle's house who live in the area.  This last shot is the beautiful pink sky we saw from their front yard.  My favorite part is that American flag in the foreground ;)

Our Thanksgiving was amazing...we can't wait to do it all over again next year.

Posted by Meg {lovingalbany} at 1:42 pm No comments:

Email ThisBlogThis!Share to TwitterShare to FacebookShare to Pinterest
Labels: family

The Next Aaron Rodgers

So...I'm failing the blog a little this week.

I haven't done a house-related post from my mom's house (three kids at 6-1/2, 5 and almost 2 years old are keeping us away from painting or ripping up flooring), I forgot to pack my camera (only iphone pictures) and we are spending most of our time at the local fitness club because they have babysitting and a huge kid-friendly pool (but, of course, no cameras allowed).

But here's a peek at life in New Berlin, Wisconsin...

You know how popular that big NFL team up North is?  With a certain MVP player?


Well, the trip to Green Bay this summer certainly made it's mark.  Because today, we walked into the local Subway and my biggest boy, Jake, saw a life sized cut-out of Michael Phelps.  He was holding a sandwich.  Jake stopped, looked at it and said, "Hey, that guy looks a lot like Aaron Rodgers."

Yes, there is green and gold running through his veins.

Maybe because we made him and his brother do this during summer break.

Back to the Packers.  And New Berlin, WI.


Is there nothing better than a green and gold football that says PACKERS on it?  Probably not.  Because I bought one at Target, and now I have to go back and get two more so the fighting stops.


Tonight we threw the football around until I couldn't feel my hands anymore.  How do the pros do it?  Jake swears "they just have warmer hands than we do."  Then he ran into the house to get his gloves for me.  Awwww.  That warmed my heart.  But my hands were still cold...

Signing off from New Berlin.

Then off to Ithaca, NY for Thanksgiving.  I'll post pictures of the amazing house we rent for the holiday on Cayuga Lake!!

One Reason to Love Wisconsin

Frozen custard.  Possibly the two most delicious words in the dictionary.

Google Culver's and you'll find a Wisconsin mainstay.  My kids have become big fans.  It's impossible for them not to.

So I stopped for a sundae while running a thousand errands with the big boys.


I may have had a chocolate malt.  And I may have hit multiple Targets during the errand run.

Disclaimer: I still have four months to go before the bullseye hits Canada...


At that price, I drag my heels and let the hair get out of hand.

But use her's first as a trial run.

This happened on Wednesday. 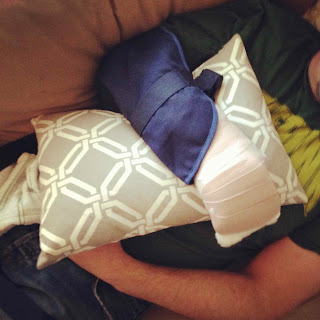 The exact quote was, "I totally underestimated this surgery."

Who knew a pumpkin could land you in a hospital.  And that a tendon reattachment would be so involved.  We'll be plugging in fake jack-o'-lanterns for the rest of time.

Until then, we have 8 weeks of physio after a follow up consult on Tuesday after we drive 10 hours tomorrow for an extended Thanksgiving holiday.  Steve included...he's flying back home for work and doctor before re-joining us in time for turkey.

So, since I've just been managing to cover the bases here at home without much time to blog, I'm looking forward to a bit of downtime with my side of the family.

And maybe some small projects at my mom's house...you never know when opportunity strikes!?

Posted by Meg {lovingalbany} at 8:26 pm No comments:


I love our basement.  Henry's recent birthday party weekend marked the one year anniversary of the ginormous renovation's completion.  Every time we're down there, we marvel at the transformation.  Love.

Suddenly, with a month to go before the big party, I realized we hadn't done much to "finish" the space since Henry's last party.  We needed artwork on the walls.  But since the basement is the gem of the house, we're careful what makes it down.


We fell in love with the map art prints the moment we saw them.  And they're personal.


Steve and I met in NYC, we spend a weekend every summer in Chicago... 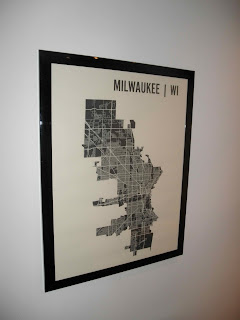 ...and I'm from Milwaukee.  Born and raised.  Go Packers.

Our first choice was to have Toronto in the mix because that's where we live.  But because of the way the city is laid out, it was only offered in landscape (instead of portrait like above).  That threw a wrench in the whole layout of the wall.  I asked the seller if he could manipulate it into portrait, but he couldn't.  Instead, he sent me the three cities above and surprised me by throwing in Toronto for free.

Could I love the artwork any more?


I also bit the bullet and grabbed some raw silk pillows and a favorite throw from West Elm.  It was an impulse purchase.  I knew I could return them for sure.  But they're staying.

The throw was on sale, and since I have one in the living room, I knew I'd like it in the basement, too.  The pillows were in the right place at the right time.  I can't tell you how long I've been looking, and suddenly they jumped into my arms.  The color compliments the grey in the bathroom.  No pattern, just textured.  Perfect.

My favorite is the view I have coming down the basement stairs. 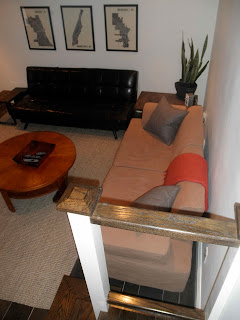 That couch is finally calling my name...


*Thank you to MrCityPrinting for the beautiful artwork and the extra Toronto print...we're still looking for the perfect spot to hang it and I'll let you know when we do!*

Posted by Meg {lovingalbany} at 2:24 pm No comments:

Email ThisBlogThis!Share to TwitterShare to FacebookShare to Pinterest
Labels: basement

Our Halloween: Rain, Sirens and the ER

But don't freak out...they weren't in that order.

Halloween is a bit of a milestone for this blog.  One year ago today, I posted for the first time!  Who could forget those faces...


I started the day by getting the house all spooky.  Nothing like leaving it 'til the last minute.


When the boys came home from their after school program, it was quite a surprise.  So it made last minute feel special.  At least that's what I tell myself.

Another surprise?  Coming home to a husband who carved his hand while doing last minute pumpkins.  Yup.  This is the ER part.

We all hopped (back) in the car, drove to Mt. Sinai emergency, dropped daddy off and sat in traffic on the way back home to trick-or-treat.


This shot of the boys is not the highlight.  That bullet through the frame is...it's a raindrop.  And we got hit by many of them.  But I had to make good on my promise to go around our whole, huge bigger-than-a-normal-city-block-because-this-is-the-annex block and finish at the fire house.

Who wouldn't love trick-or-treating at the fire house!?

So we pressed on.

With George in tow. 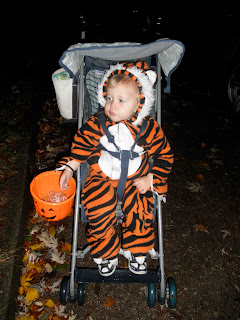 Poor guy was supposed to stay at home with daddy.  Instead, he tagged along strapped into his stroller.  I just couldn't let him toddle around.  Not in the rain with his older brothers sprinting from house to house.  At least they hit up the neighbors for candy on his behalf.


Henry got a few raised eyebrows when he asked for a second helping.  But when neighbors spotted the caged tiger, they gave extra.


Who could deny those red raw numb hands?

Rounding the corner on the homestretch to the firefighters, we stopped in at a few more houses.  Only the ones that were brightly lit and on the way.  The bags were getting heavy.

Our final house was the one next door to the firehouse.  As soon as she opened the door and the kids yelled "Trick or Treat!" we saw this:


The garage door opened, full lights went on and the siren started blaring.  They left.

Par for the course.

So instead of our regular picture with firefighters who gave out tootsie roll pops, we have a picture with the closed garage door.

As soon as that picture was snapped, we hightailed it home.  I couldn't feel my fingers anymore and George wanted out of the stroller.  The boys ran behind me to catch up...


At our house, I let the kids gorge themselves when they get home.  They get that one big night.  After that, the candy magically disappears.  Usually overnight.  Few questions asked. 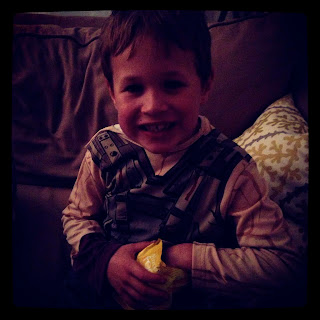 Jake went right for the chips. 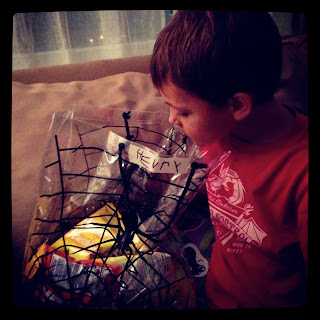 Henry ditched his costume immediately and tried to jump in his bag. 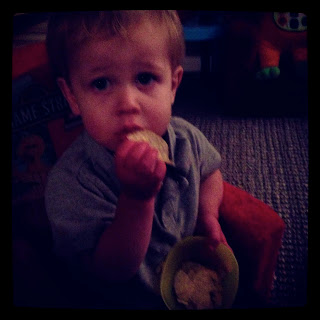 George followed in his brother's footsteps...CHIPS!

We left our house lit while the gorging ensued.


There were a few more visitors to the door, but most had come and gone.


The rain must have dampered attendance.  Normally that bowl is empty.

Once all 3 were in bed, I cleaned up the wrappers.  This is probably a record year.


Also a record?  Steve's wait time in the ER.  He saw people who came in after him get attended to and leave before he was even looked at....!!!

Four hours after being dropped off, his hand was wrapped up.  And papers were in his hand with information to contact the hand clinic.  The tendon in his pinky was severed.  Next comes surgery and physio.


So I did what any loving wife would do.  As soon as his cab pulled up, I poured him a glass of wine and chose the best piece of chocolate from the evening to ease his pain while the painkillers set in.

Yep, this halloween is one for the record books.  Literally.