The Return of the Garden

This was 7 weeks ago.


And this is today.


Seven weeks is nothing.  But that garden is everything!  I'm amazed how much has filled in, especially with the beating the backyard has taken over the last 3 years.  I really thought more would be lost.  Incredible.

Almost all of the garden came back on its own.  Hooray for perennials.  Only a few spots took a big hit, due to the fence, which I had to fill in this year.


The planter used to be on our old deck.  I moved it to the back corner to give some height where I lost an evergreen bush.  It's ok.  I love the fence more than I ever liked the bush.  This corner is super shady when the leaves come out, so I chose ferns along the back and hostas in front of the planter.

I split the big green hosta and hoped they would fill out.  They obeyed.  The yellow one in front of it gives a pop of color in the shade.  And, of course, I planted in threes.

The rest just grew in. 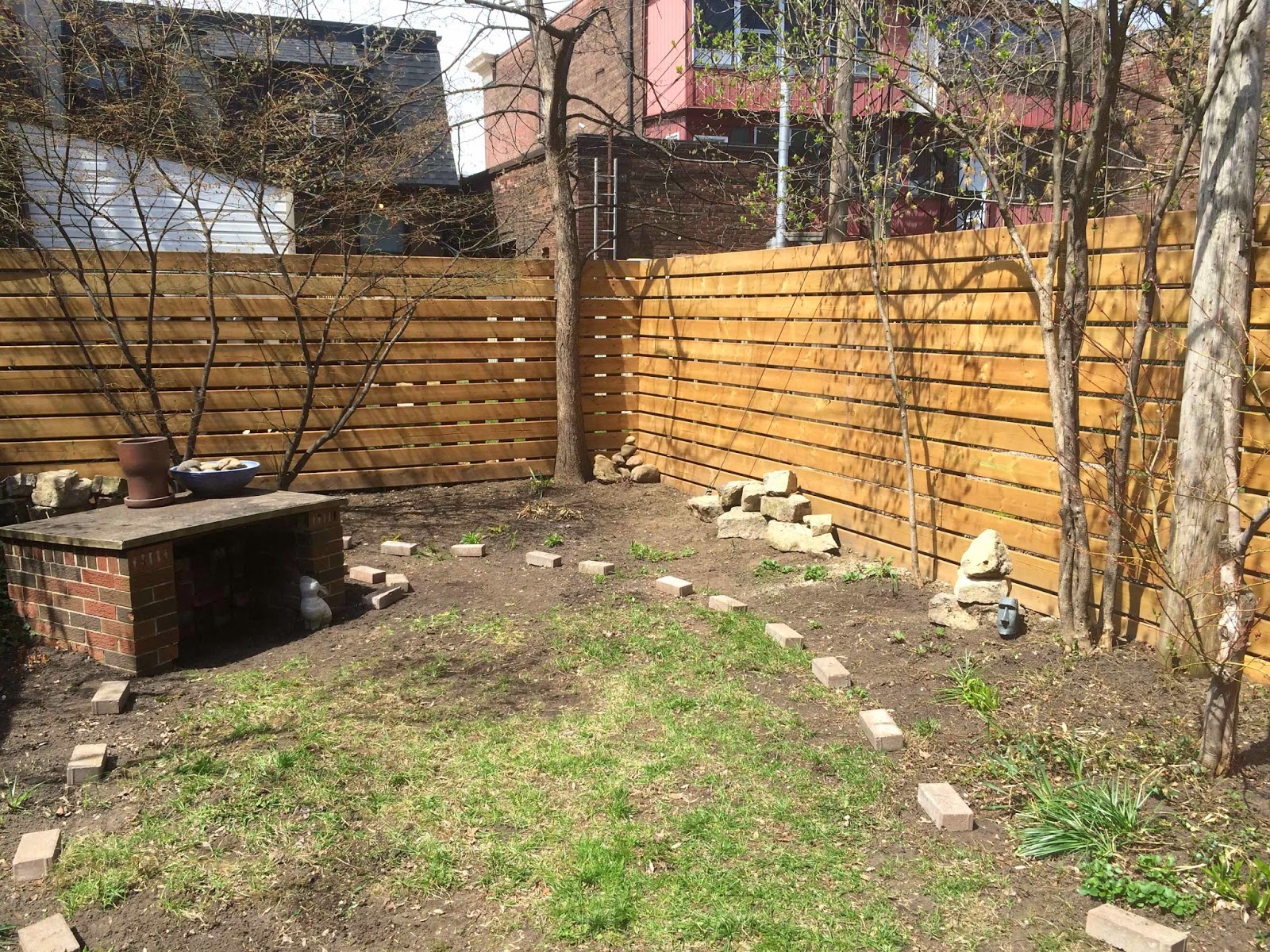 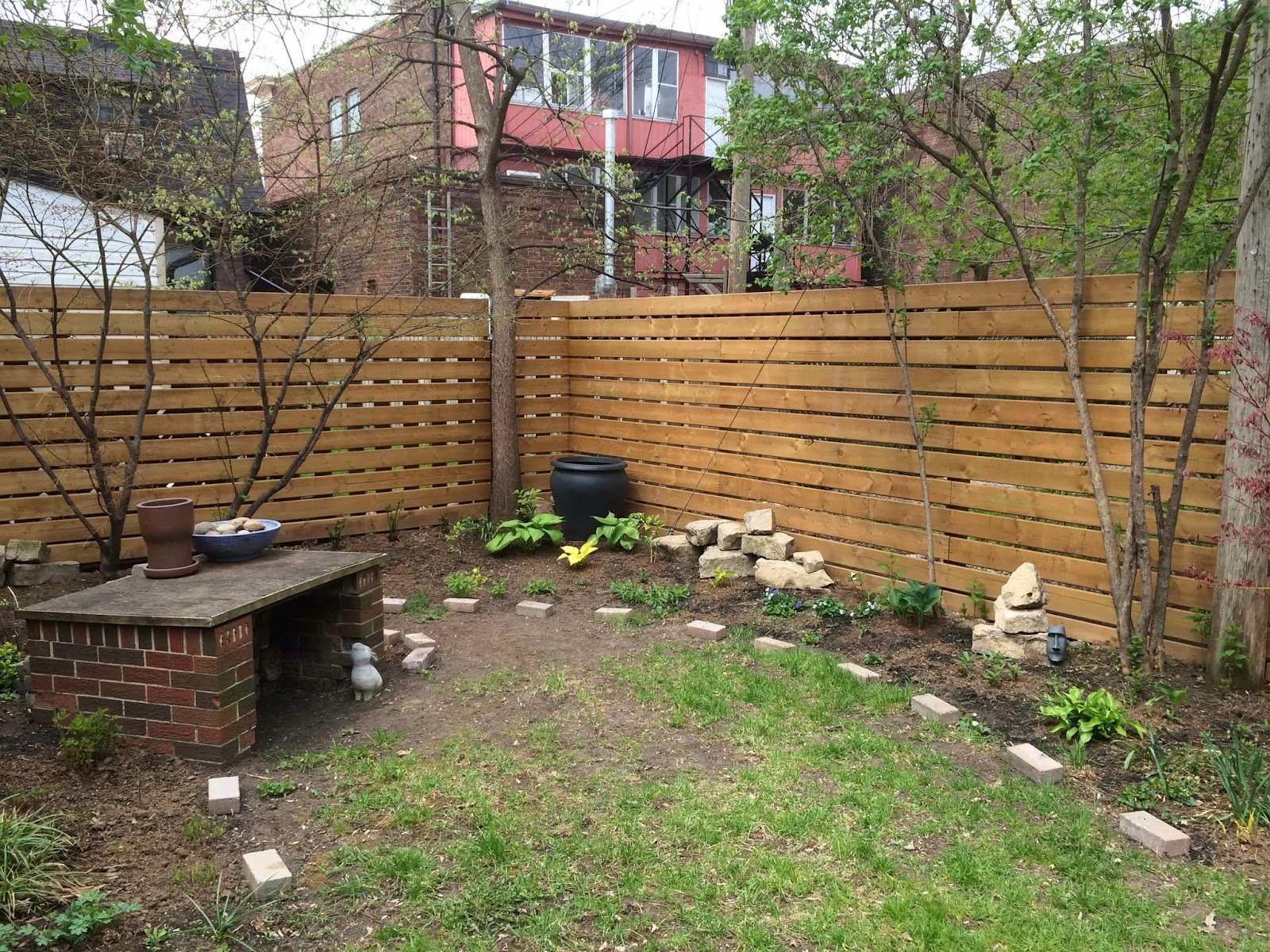 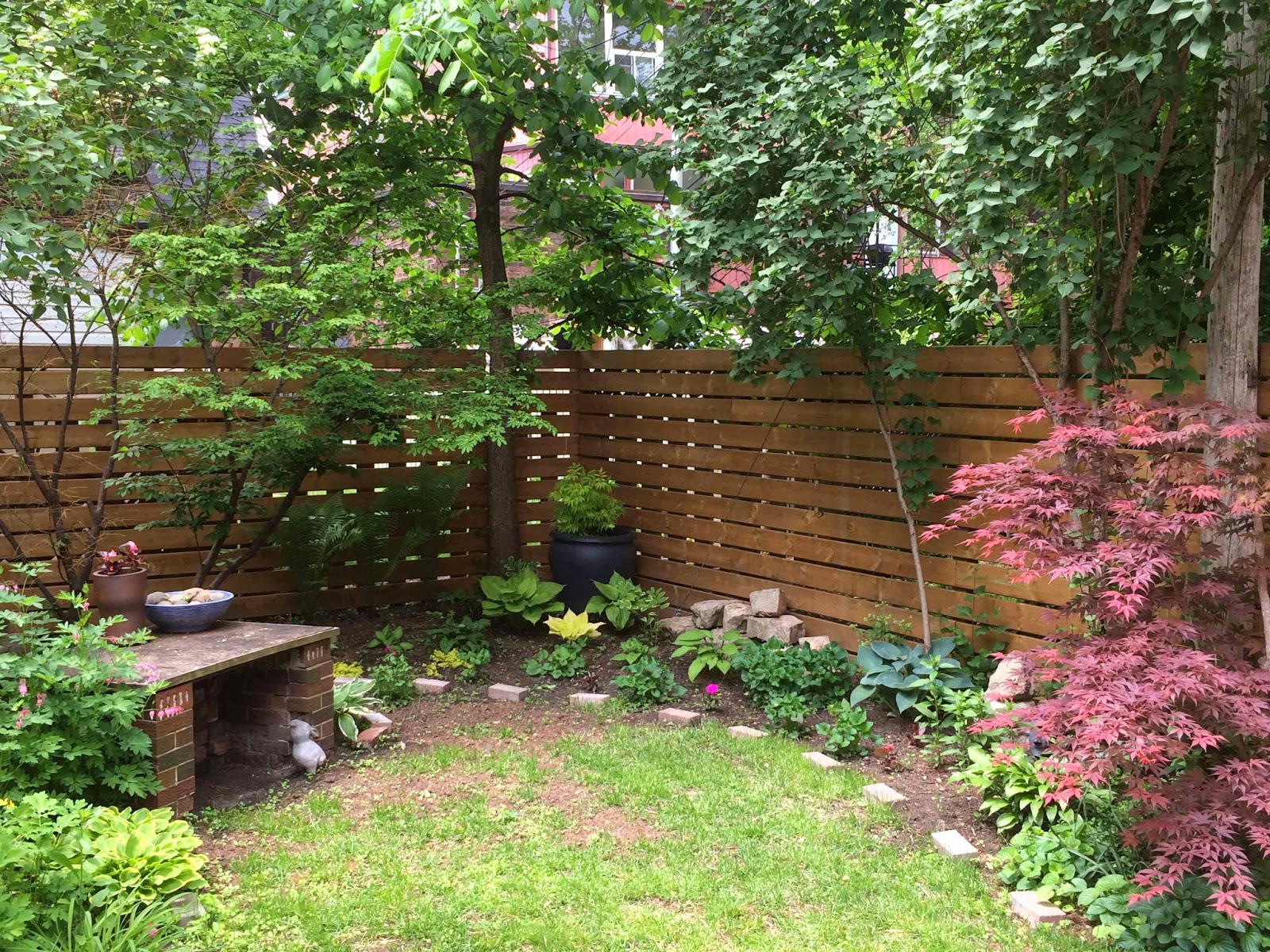 That corner is so deceiving!  I'm surprised every year by how shady it gets.  Spring comes and I think, maybe I really CAN plant "part sun" or even "part shade" plants there...  Then, surprise!  The elm tree in the corner leafs out and it's dark enough for my toddler to take his afternoon nap there. 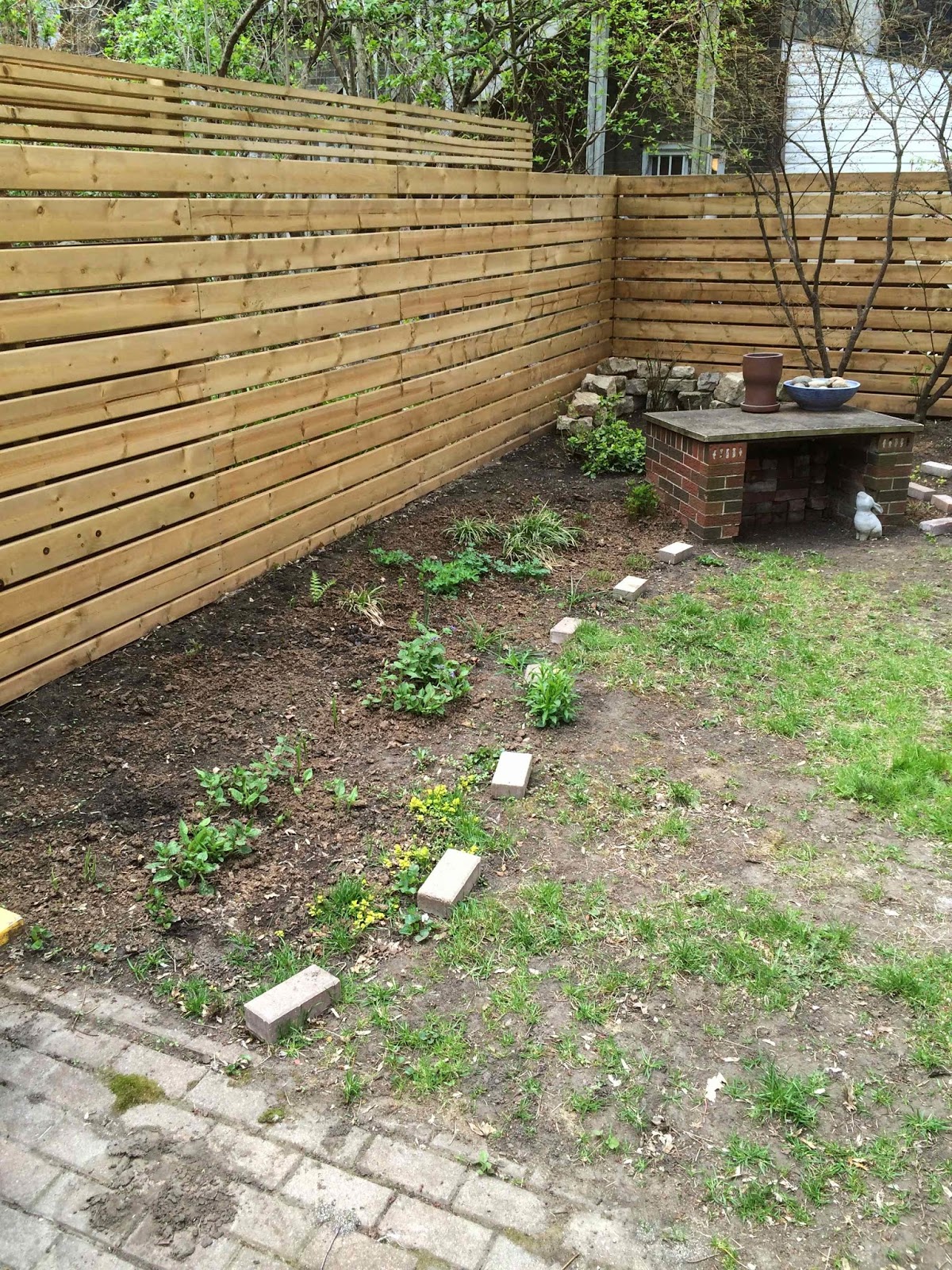 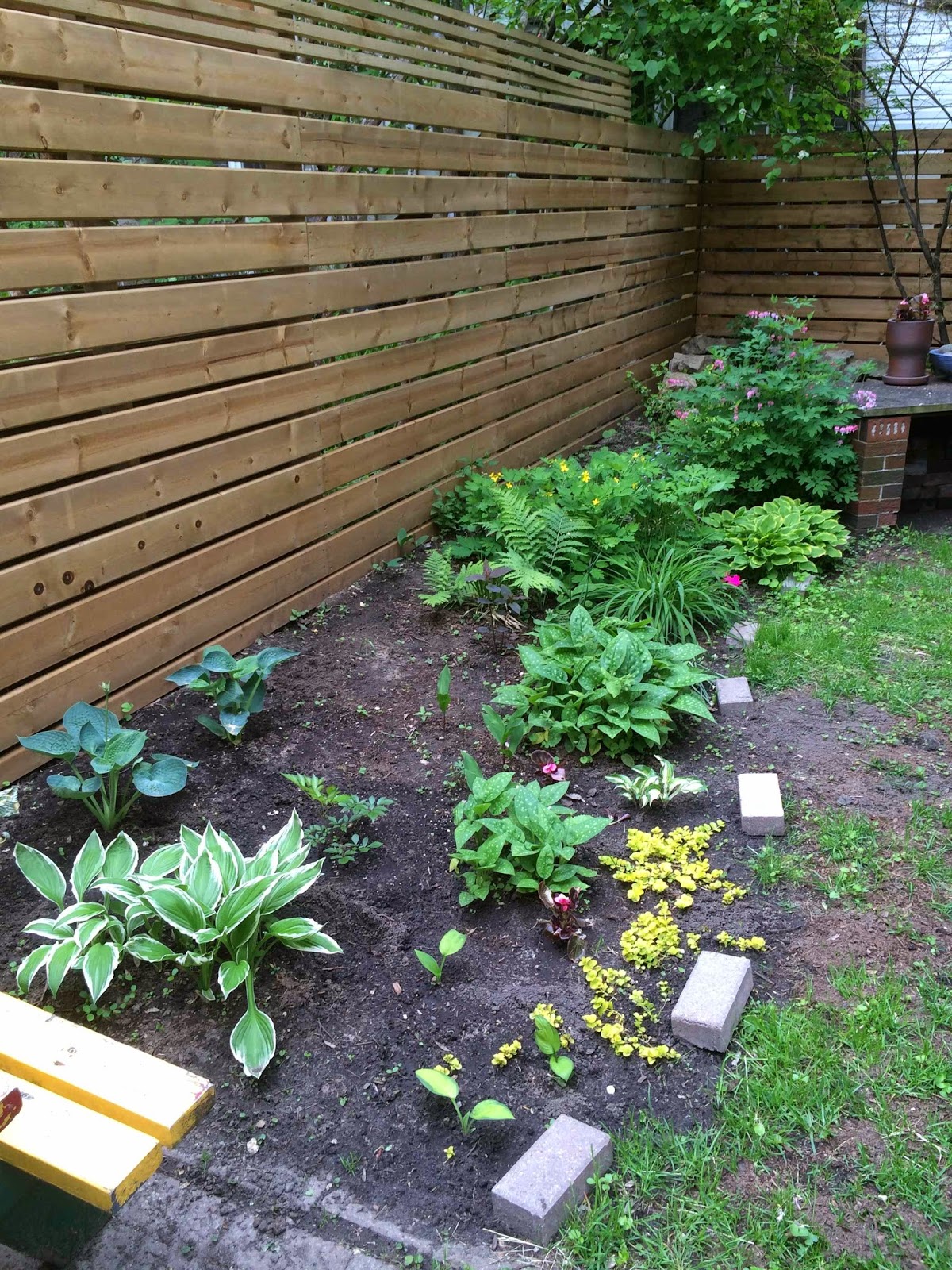 It's shady over here on the left side, too.  The plants up against the fence get no direct sun at all.  That's where I put in those blue-green hostas which love the shade.  The darker their color, the shadier they like it.

But 2 feet away from the fence, it's a sun fest, which is brand new.  Before the new fence, we had a tall lilac bush/tree on our neighbor's side that blocked the sun to the brick "edging".  Now, those part-shade lungworts at the edge are not sure what to do.  They may find a new spot, but I'm giving them a chance.  And splitting up sunnier hostas for this little corner as I wait and see... 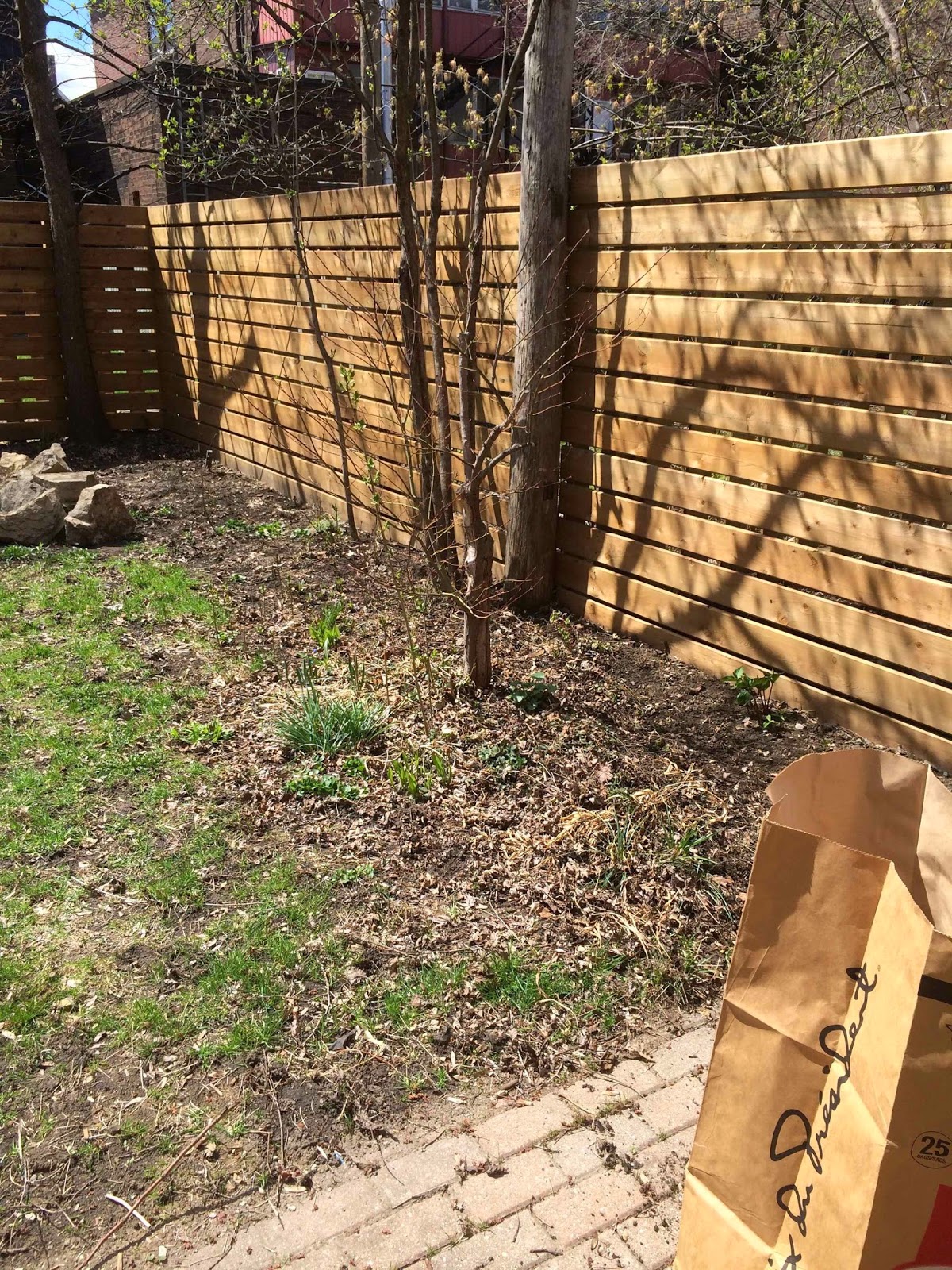 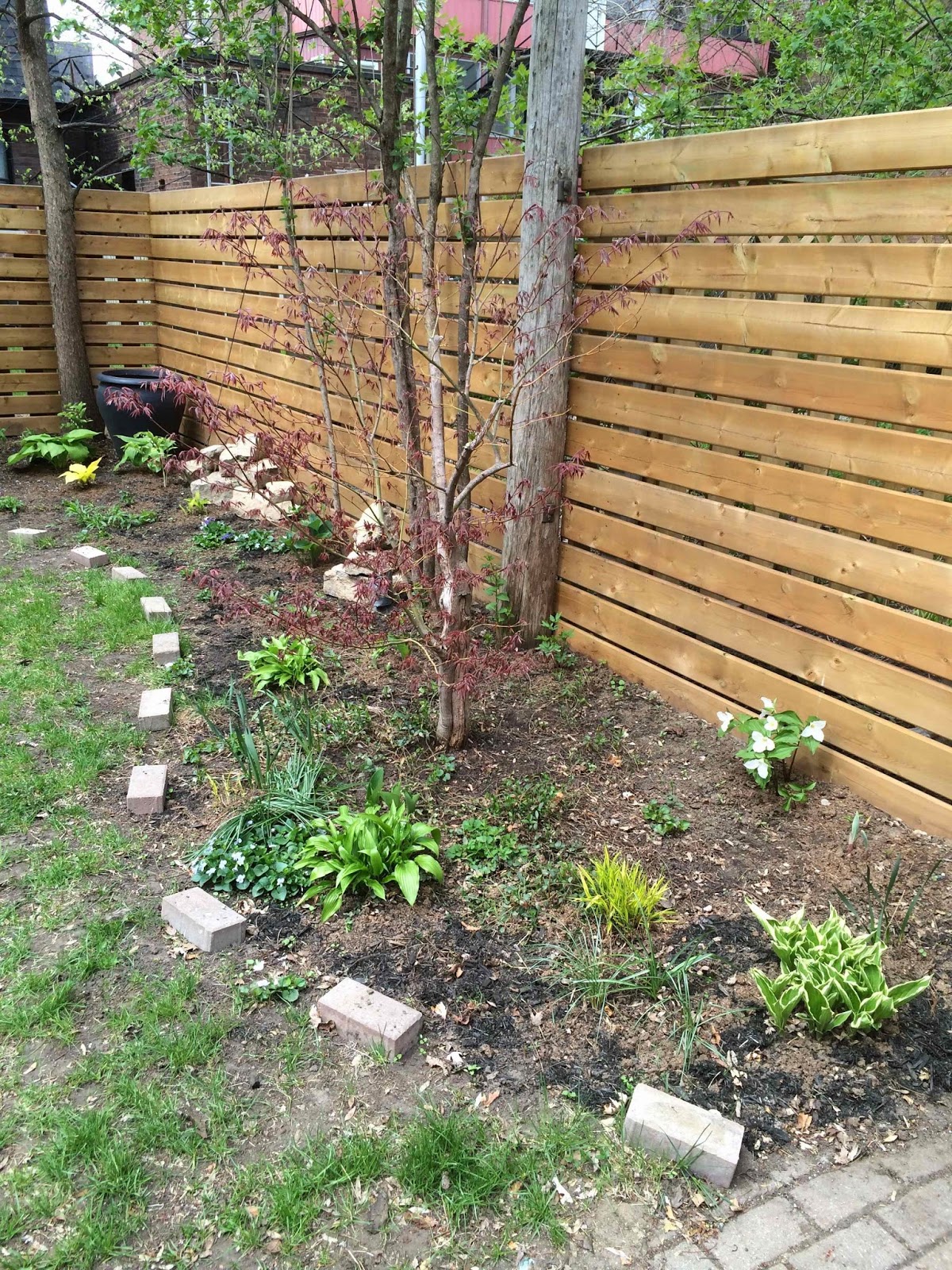 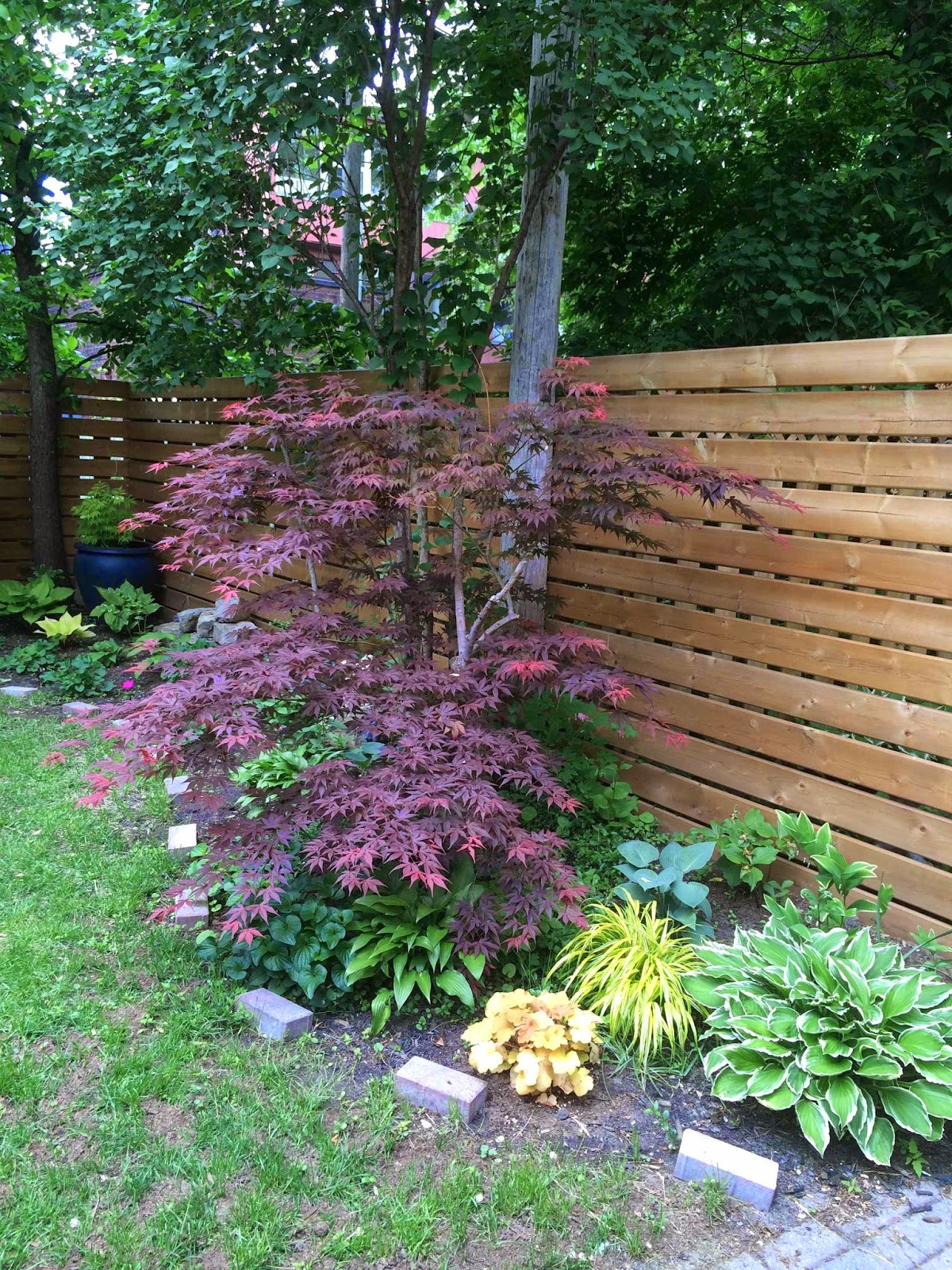 But, in the meantime, this sunny right side has gone gangbusters.  Even the Japanese Maple that I almost killed 4 years ago.  It's a running joke with my husband.  I pruned it so badly, it almost died.  I was so so sad.  So I made a deal with him.  He gave me one chance to bring it back to life or else dig it up.  A respected professional came in.  He fertilized it and made me PROMISE never to touch it again.  I haven't.  And so far, it's obeying, too.

This might be my favorite little corner.  I transplanted a few sun loving perennials from semi-shade here, so they should grow larger soon.  Nothing is blooming (the clematis on the right will, soon) but I think I prefer it this way.  There's something about only texture that I love. 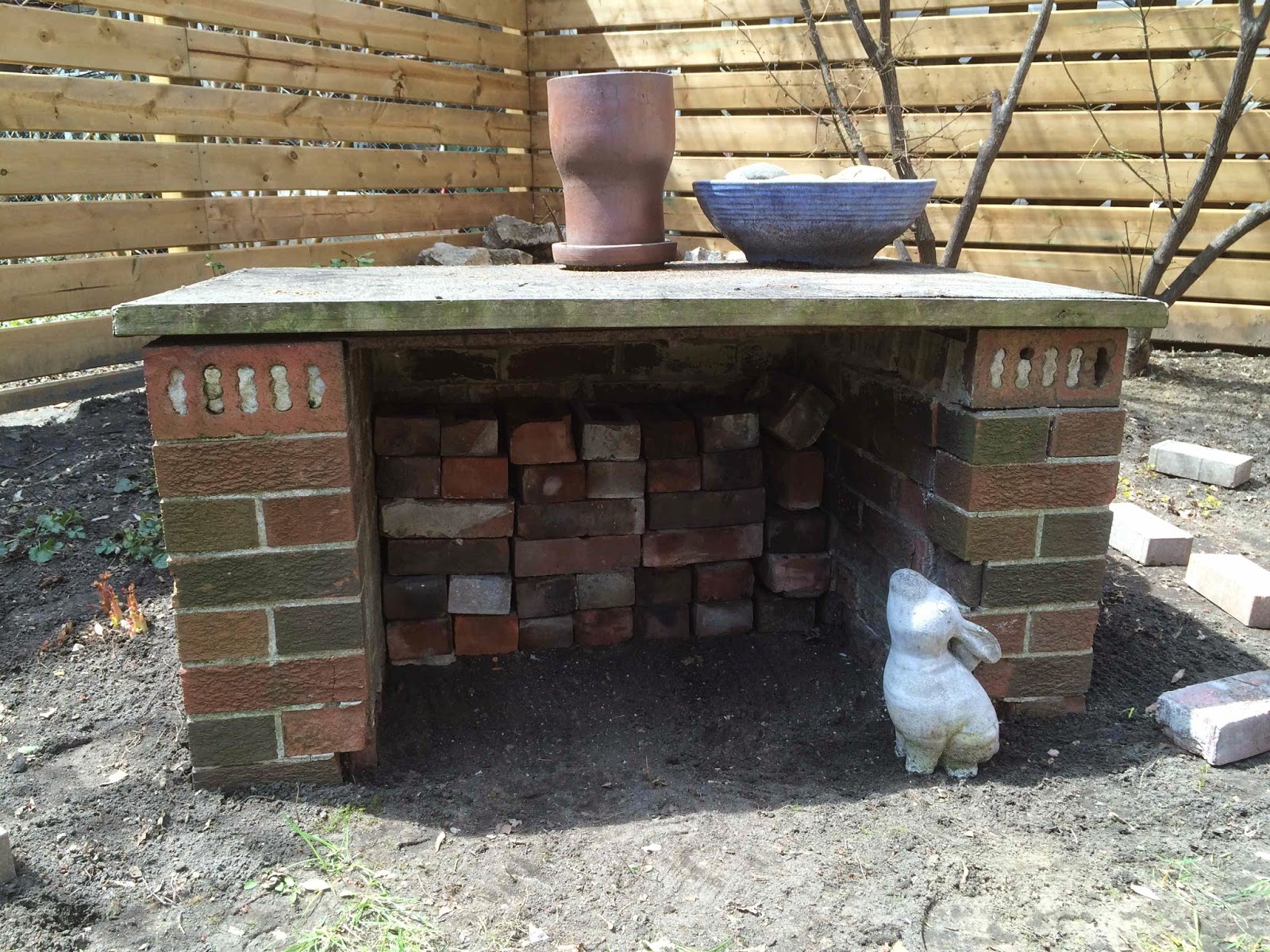 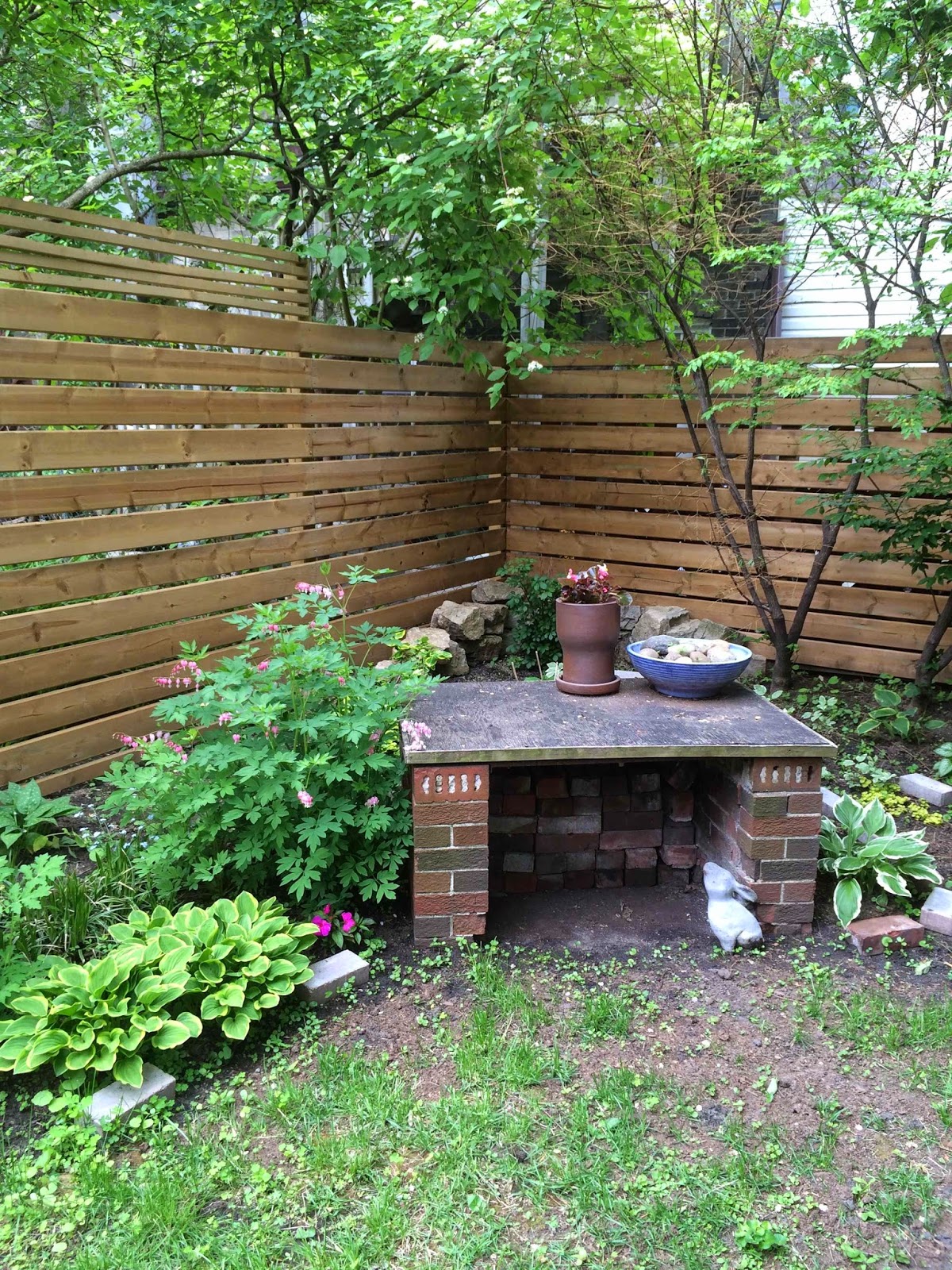 And the firepit.  Oh that firepit.  I still don't know where I stand with it.  Right now it holds all the old 1900's brick that I can't bear to part with...and there are stacks of extra driveway pavers hidden behind it.  There's enough "growing" on around it, that changes may wait another year.

Then I'll rip the whole garden out.

But for now...let's have a look at what 7 weeks can do for a backyard. 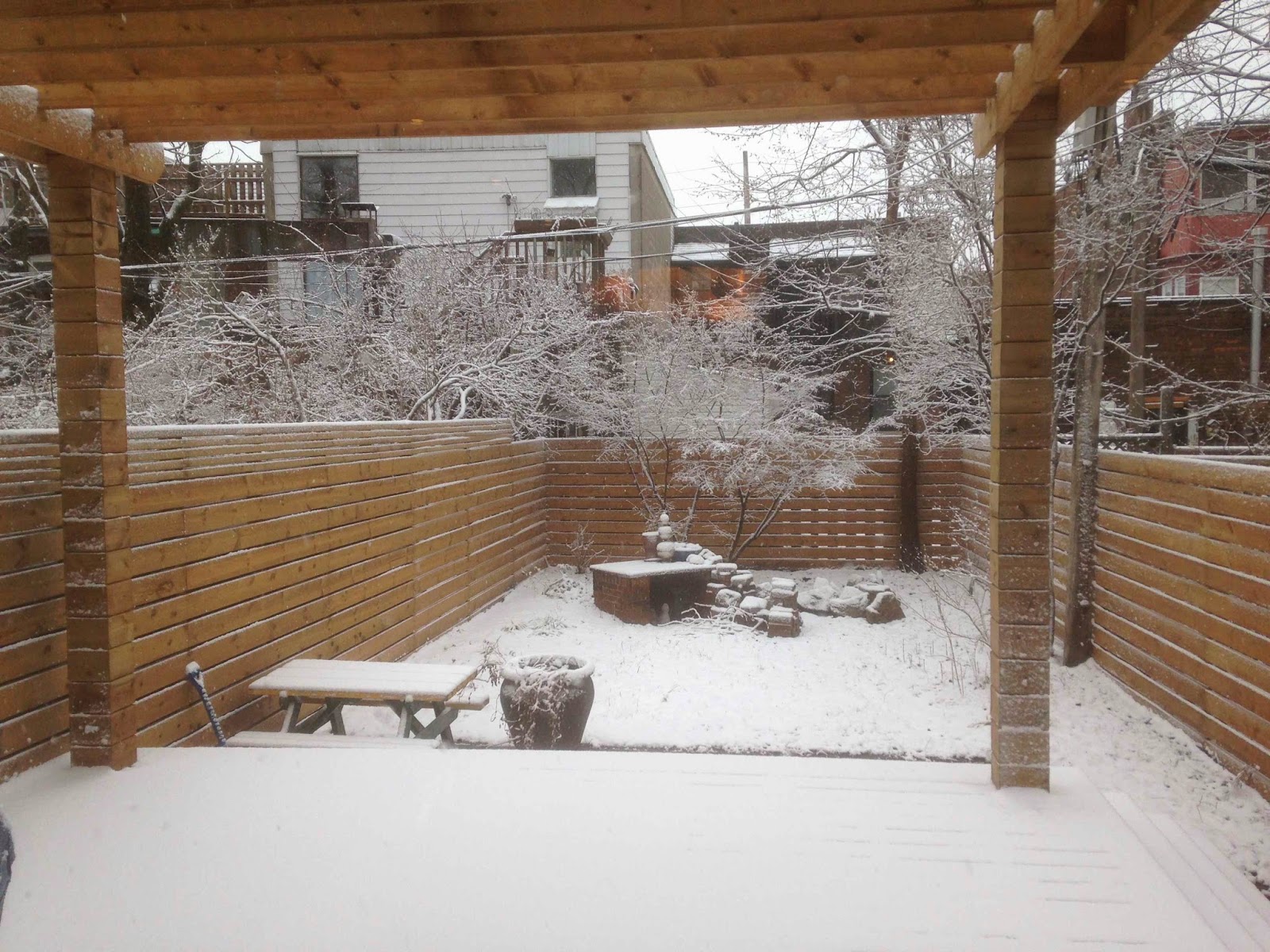 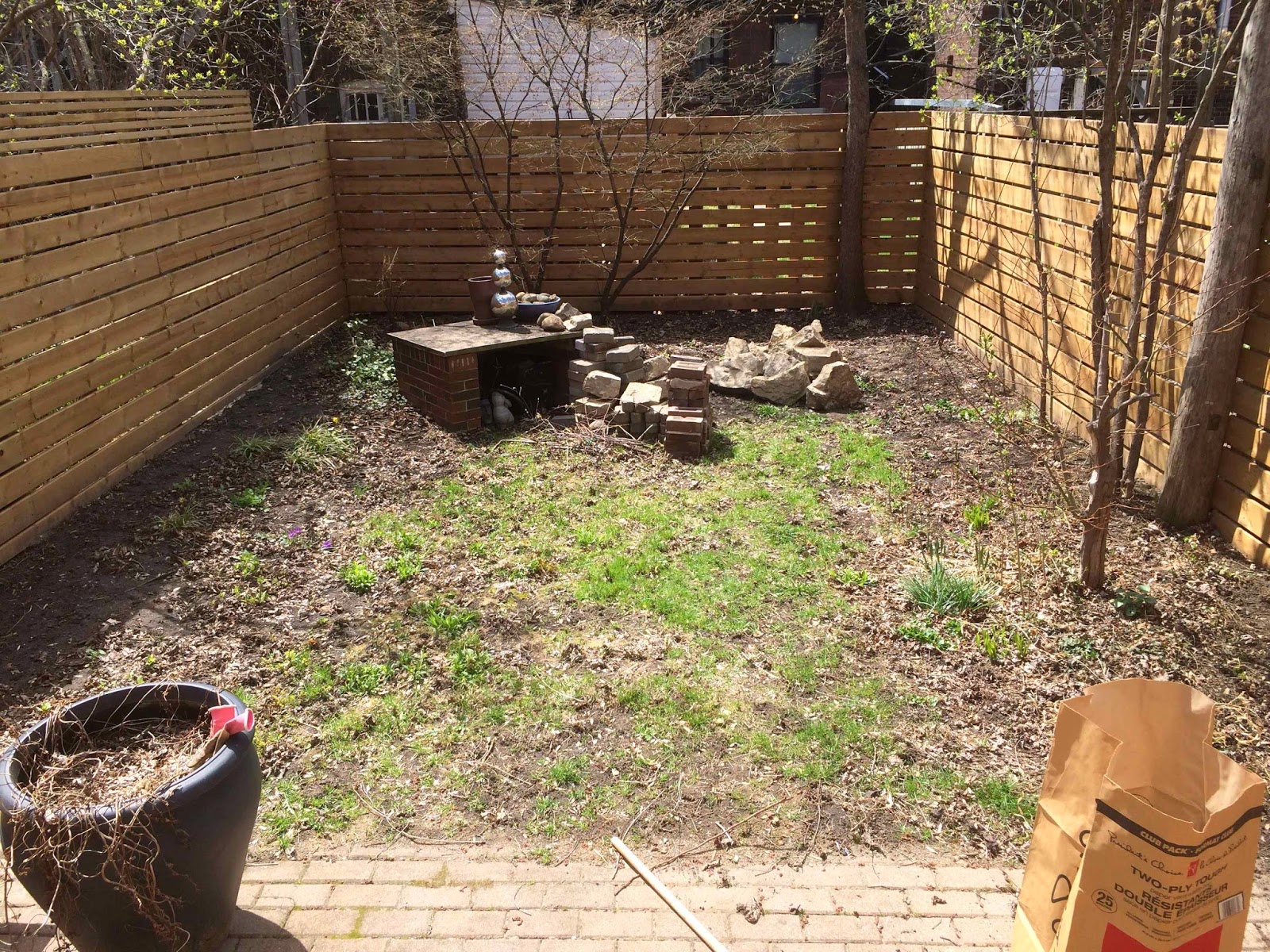 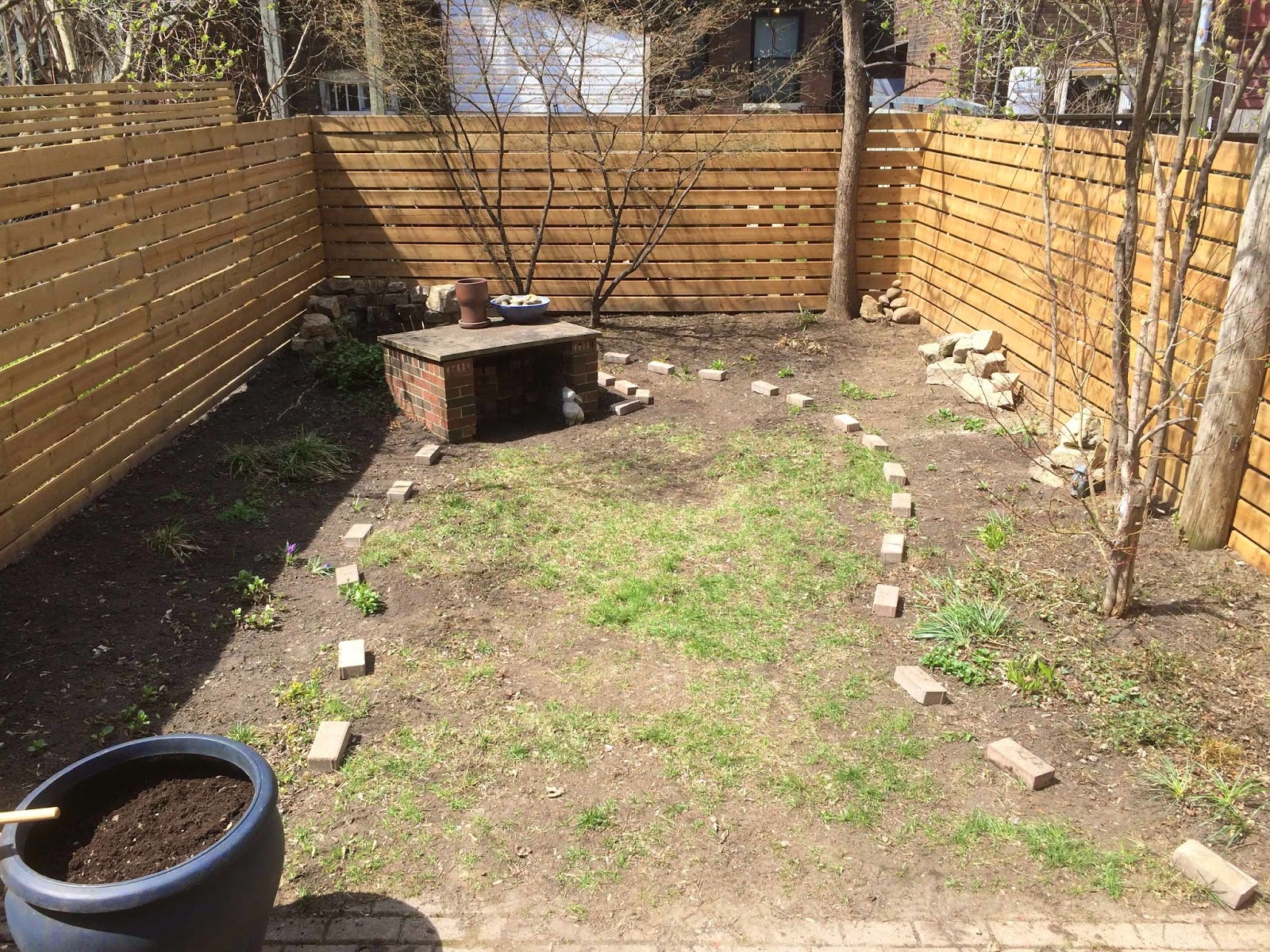 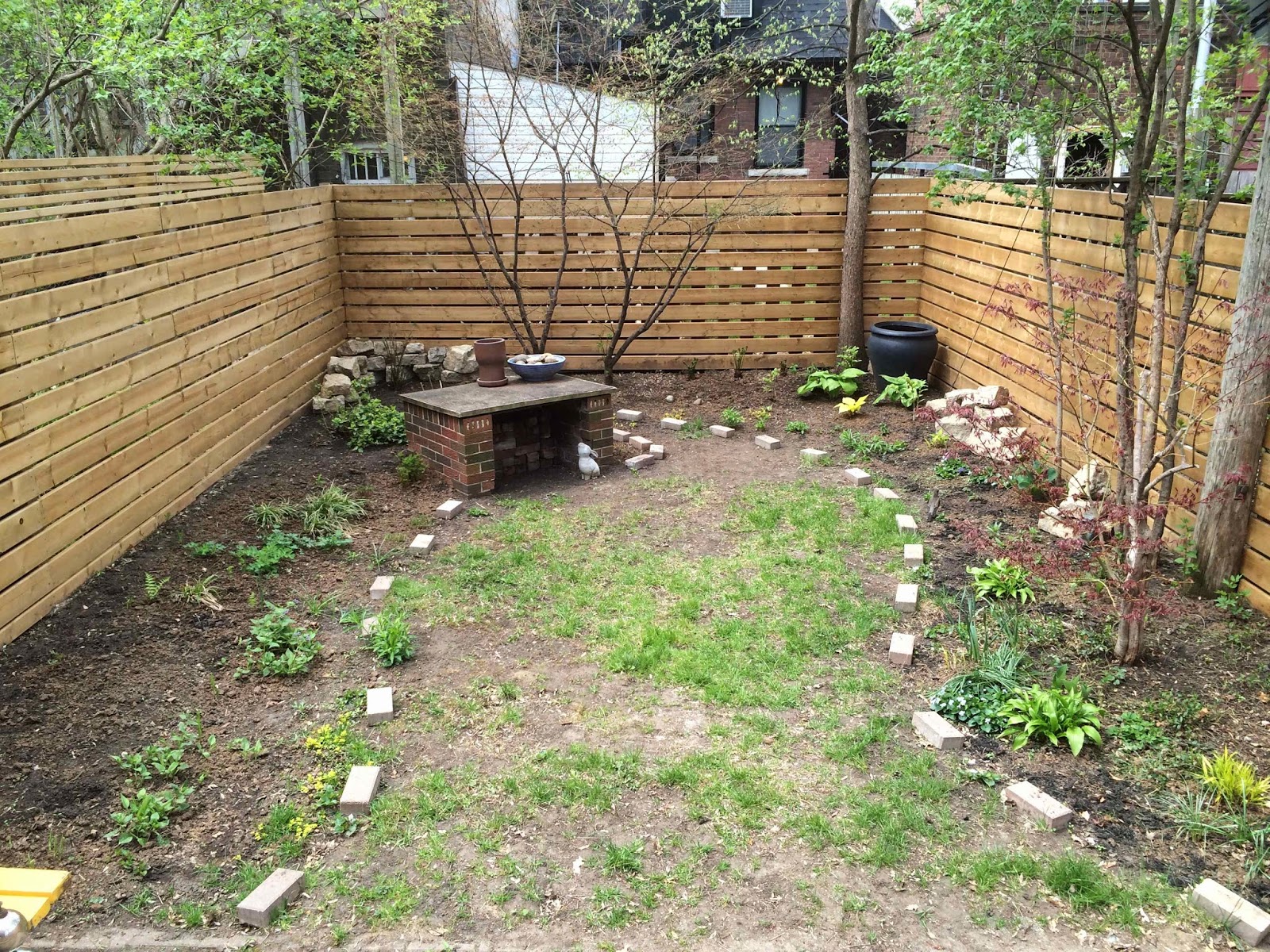 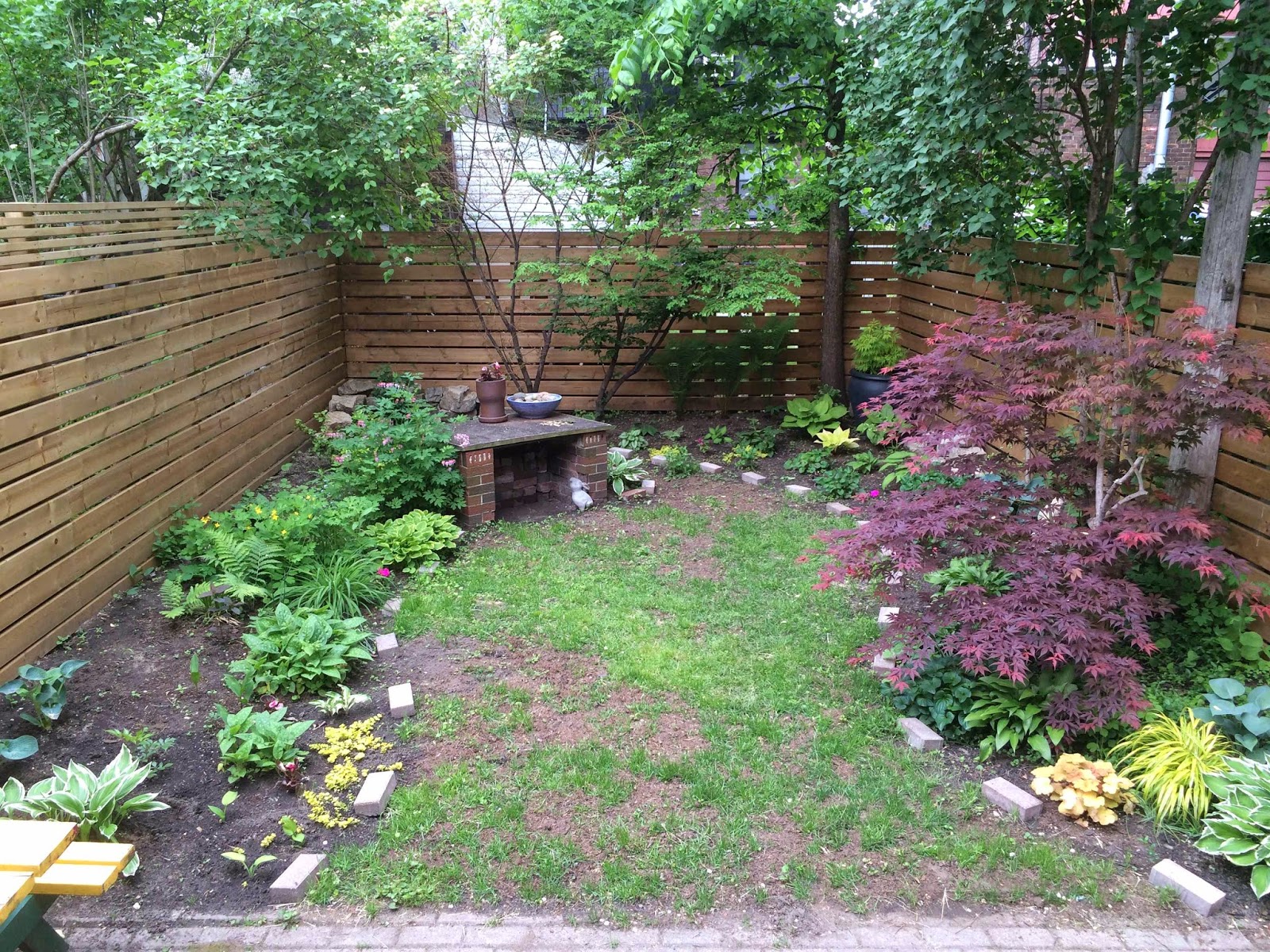 Well, I'm amazed.  Hoping for the best, but expecting the worst, really worked in this case.

But I'm not ignoring that awful patch of semi-grass.  Or this... 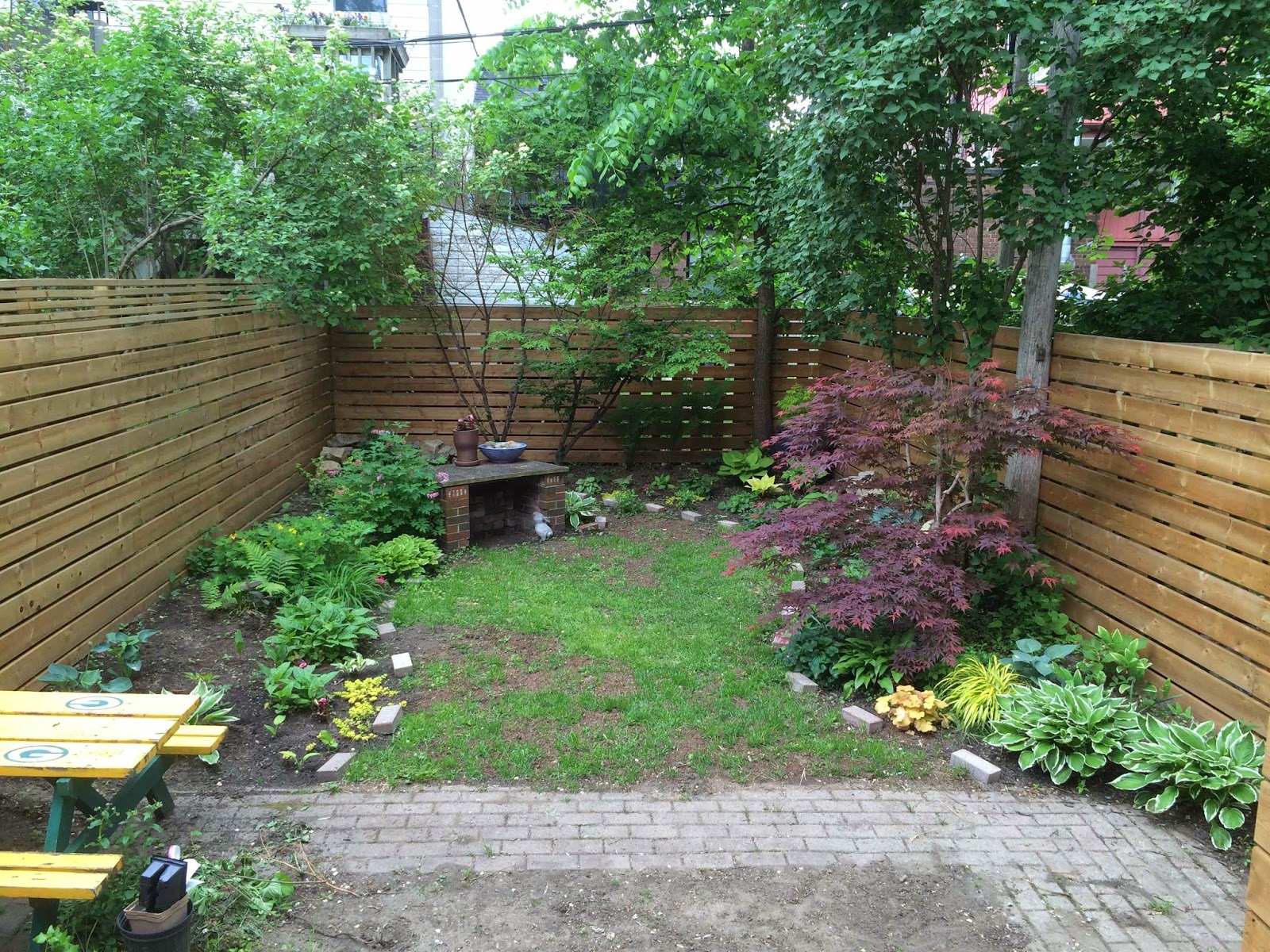 ...what you see when you step off the deck.  Oh, you know, just the old dirt footprint of our last deck.  I don't know if I am gung-ho enough to rip out and lay new stone.  But I could pinterest all day, dreaming of what I'd like to go there.

For now, I'll just sit back and ignore the dirt enjoy the view!

Email ThisBlogThis!Share to TwitterShare to FacebookShare to Pinterest
Labels: garden

Still on the (Fig) Wagon

The fiddle leaf fig plant.  It seems like it's been so over done, but I can't quit it.

We finished renovating our house 10 months ago.  That's how long my first fiddle leaf fig plant lasted.  Which is a miracle for an indoor plant killer like me.

The end began in February when it dropped about 15 leaves in one day.


That sad little north-facing bay window gets very little sun.  So I set out to replace it with something else.  I visited Lowe's, Home Depot and a fancy indoor plant nursery.  Nothing, nothing and very very pricey.

And then I went to IKEA where I found that fig in the first place. 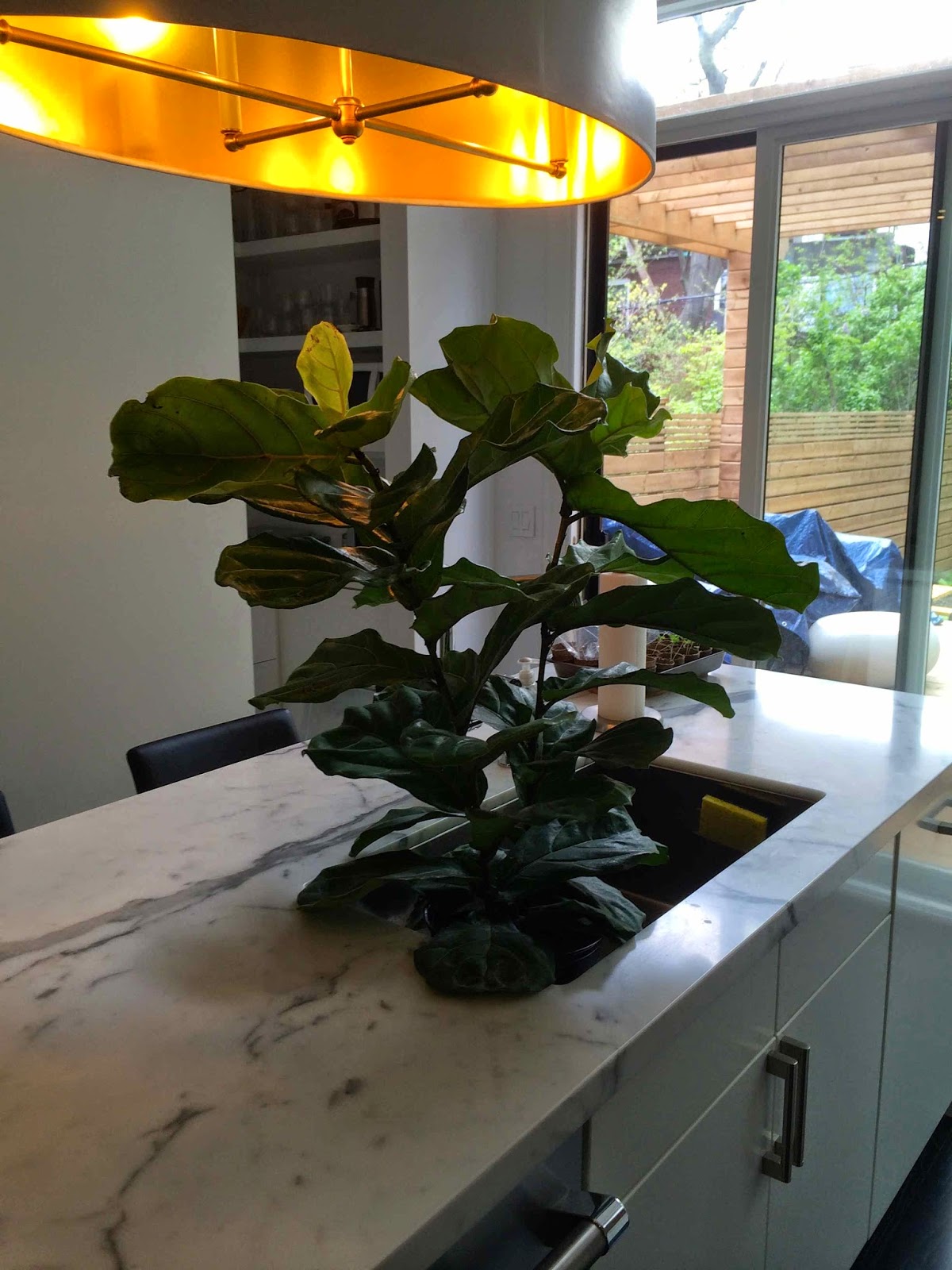 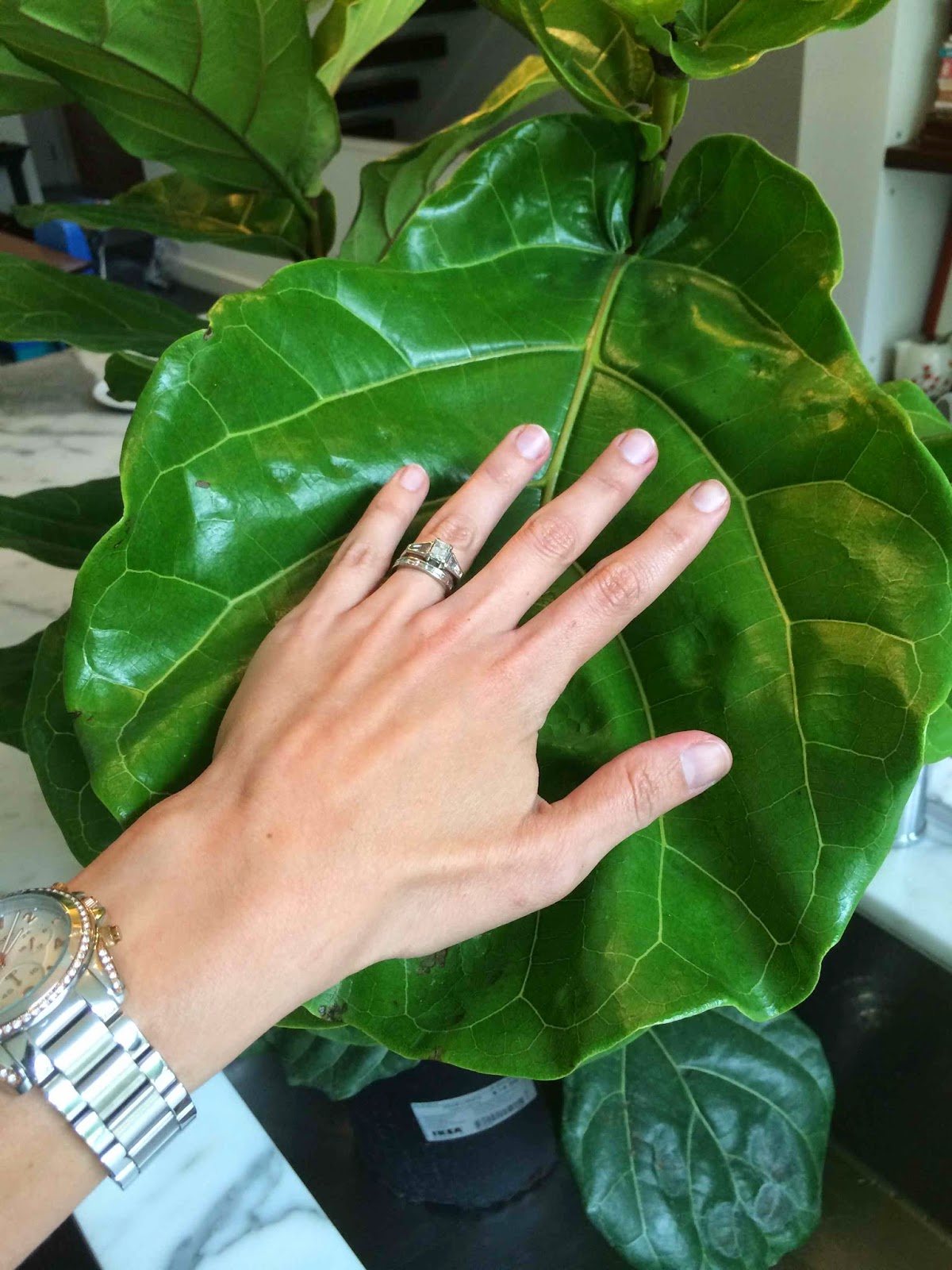 
It may not last another 10 months, but for that price, I'm willing to try.

Finding a pot in the basement helps change things up, too.  I might spray paint it gold...  To match the kitchen chandelier??!! 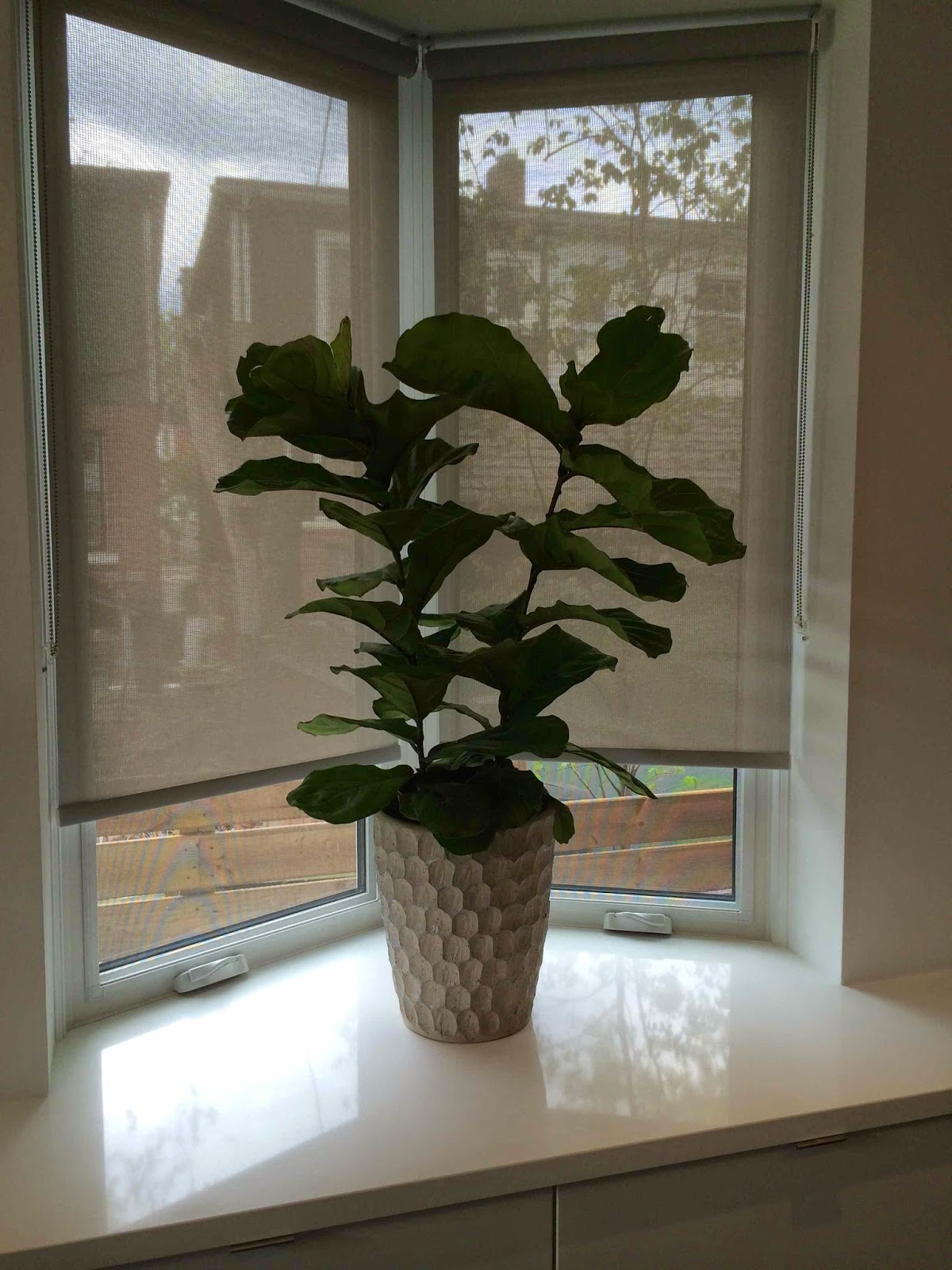