My last post was a guest post about my oldest son's decorating skills in his own (new) room.  And how I cringed.  Then got inspired.  And thought about more... 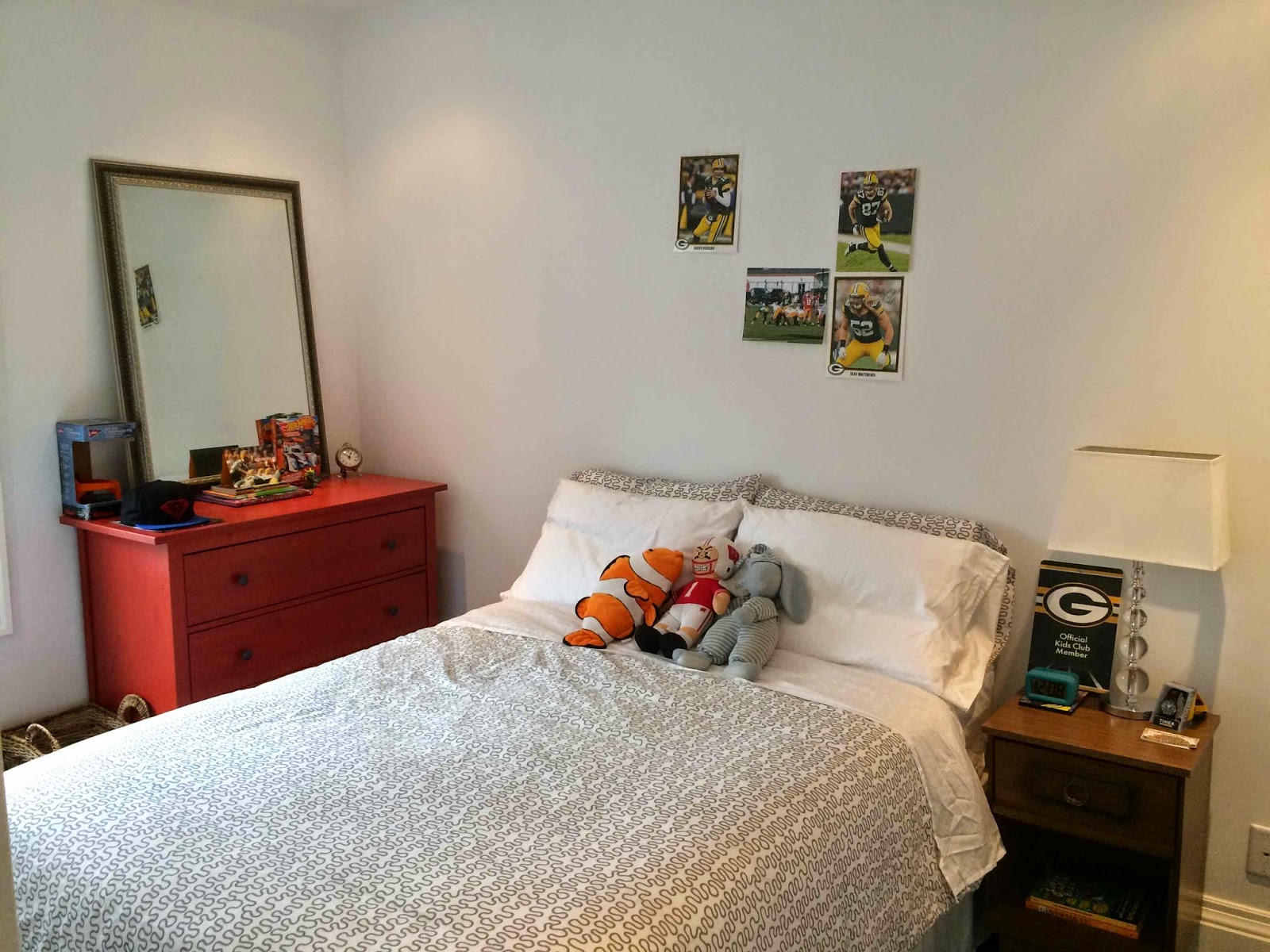 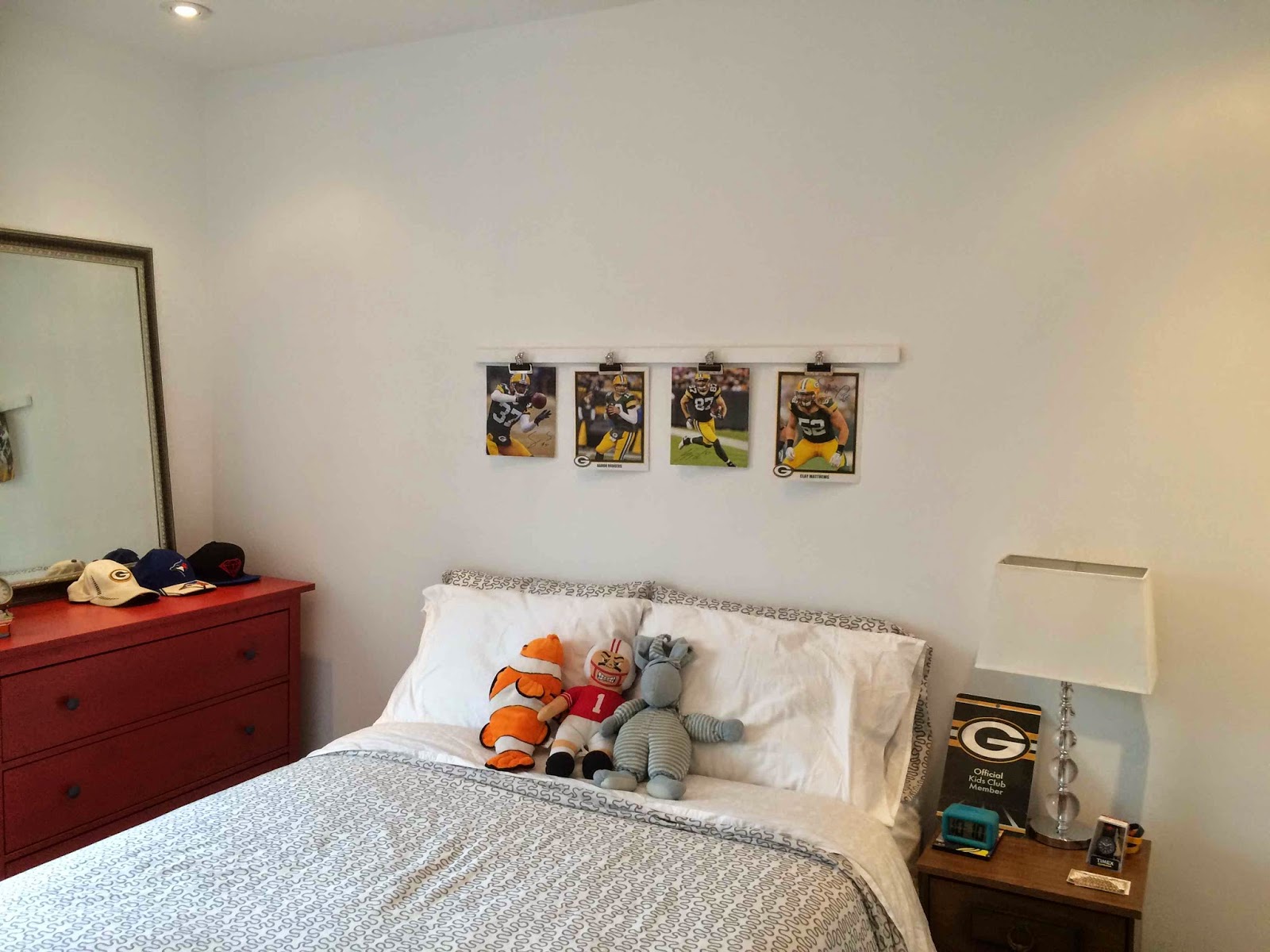 So. Much. Better.
Even close up! 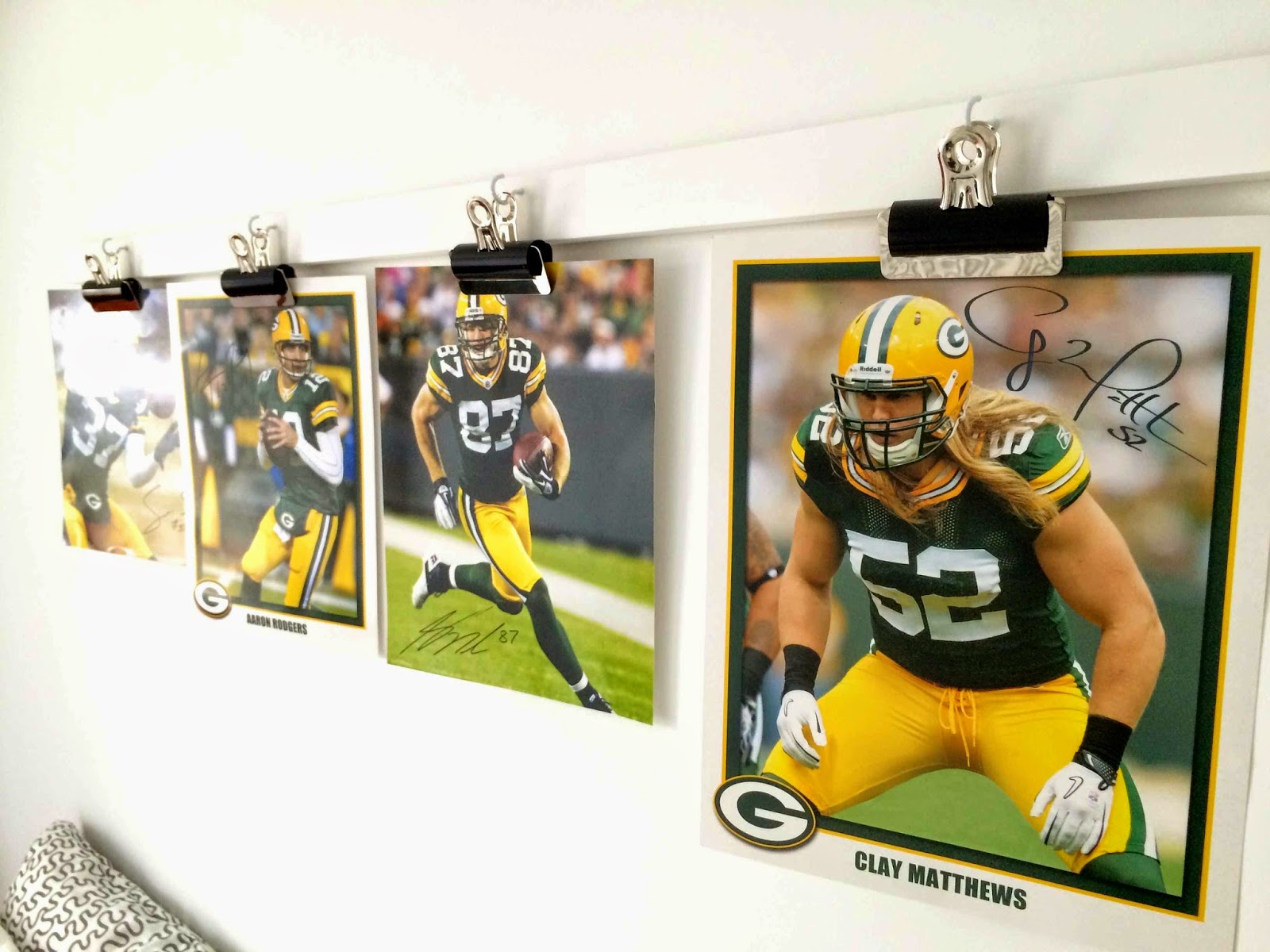 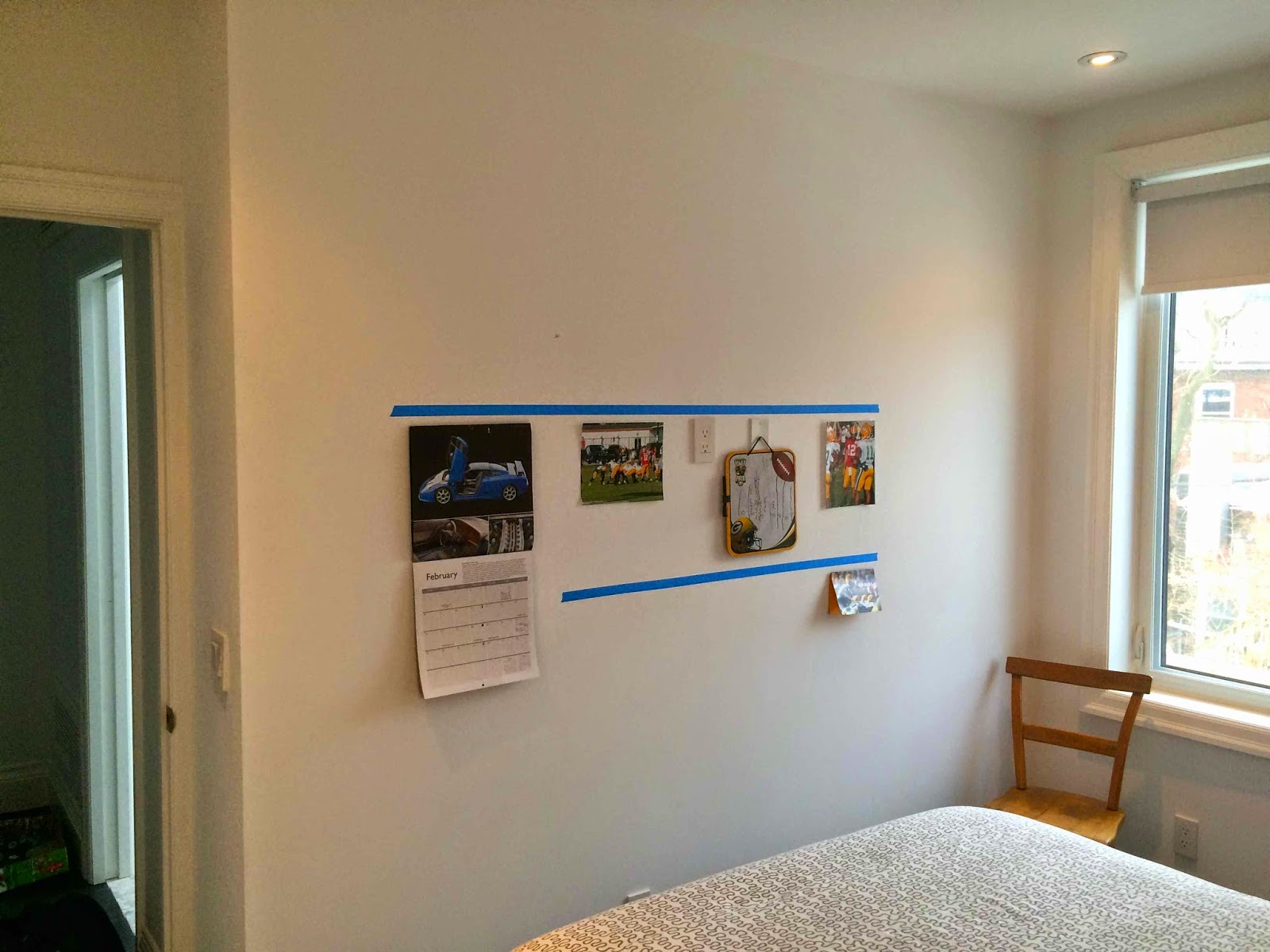 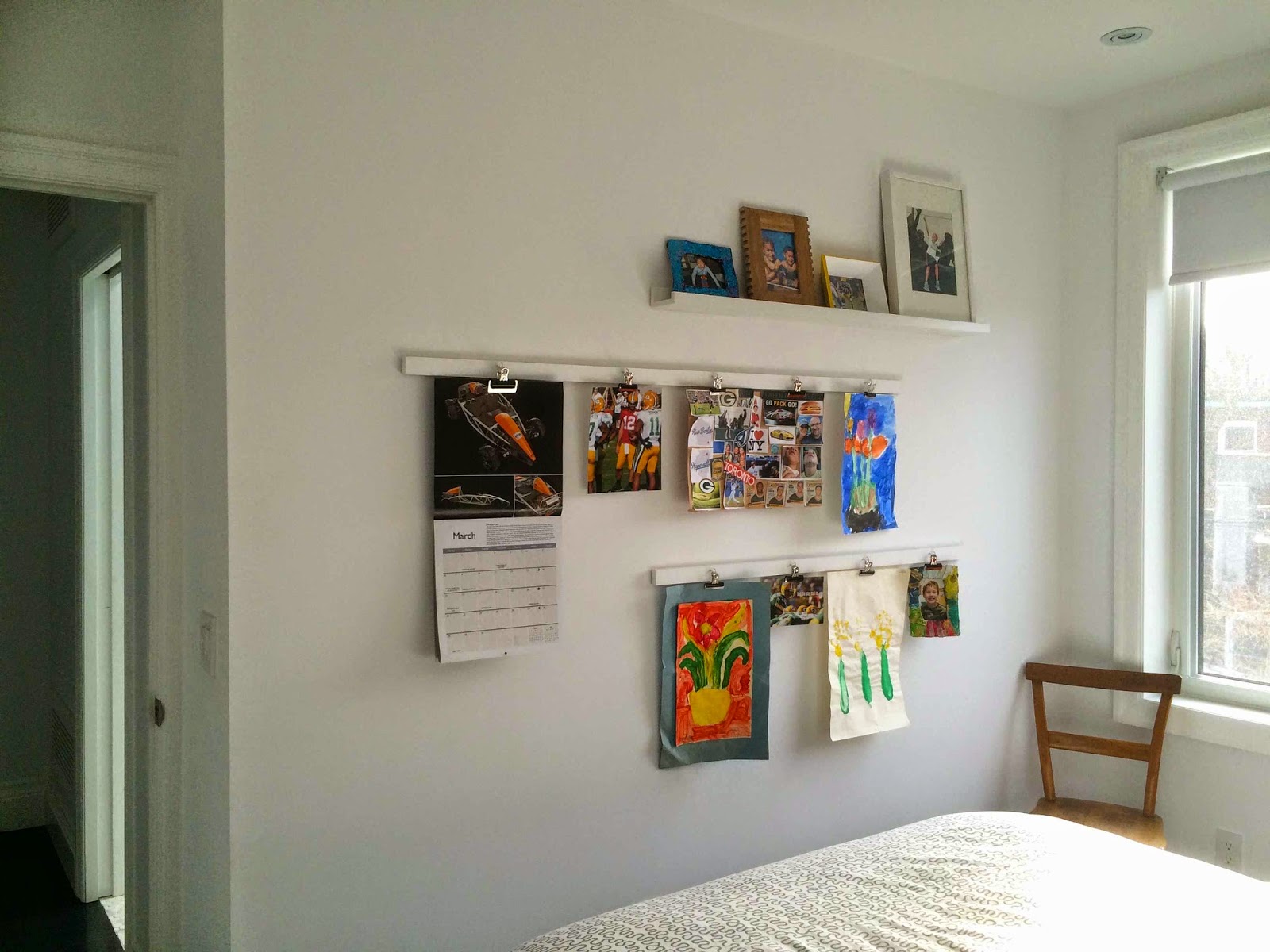 Waaaaay better than a calendar duct taped to the wall.  That was the before-before picture I missed.  I was too busy slowly peeling back tape hoping it wouldn't take strips of drywall with it.  Ugh.

So this wall.  Same painted wood with hooks and command strips as before. 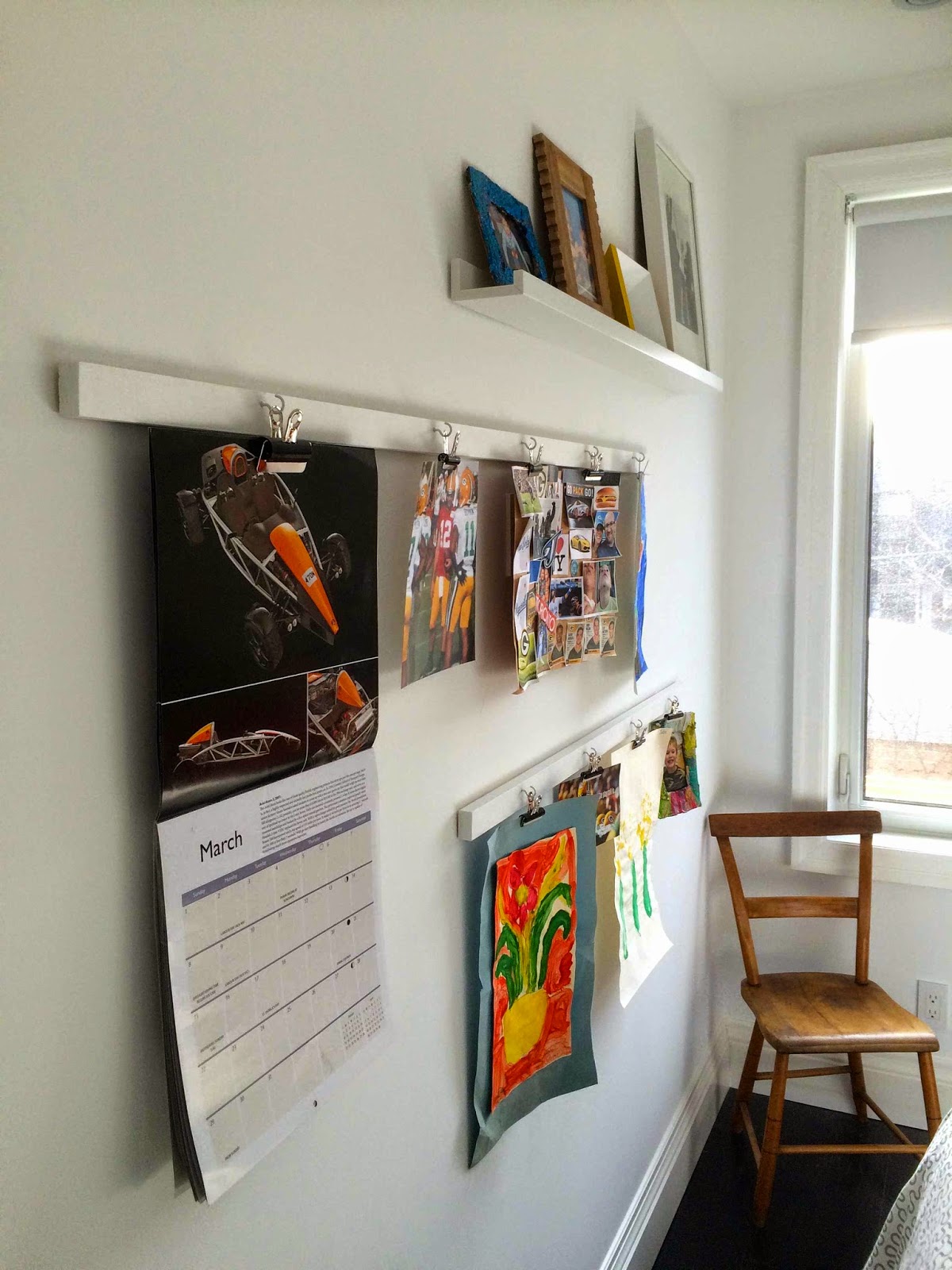 Plus a ledge.  IKEA's RIBBA picture ledge.  I didn't use command strips there.  Just 3 screws into the wall, one into a stud.  The frames are much heavier than paper with a bulldog clip, so I didn't want to risk it. 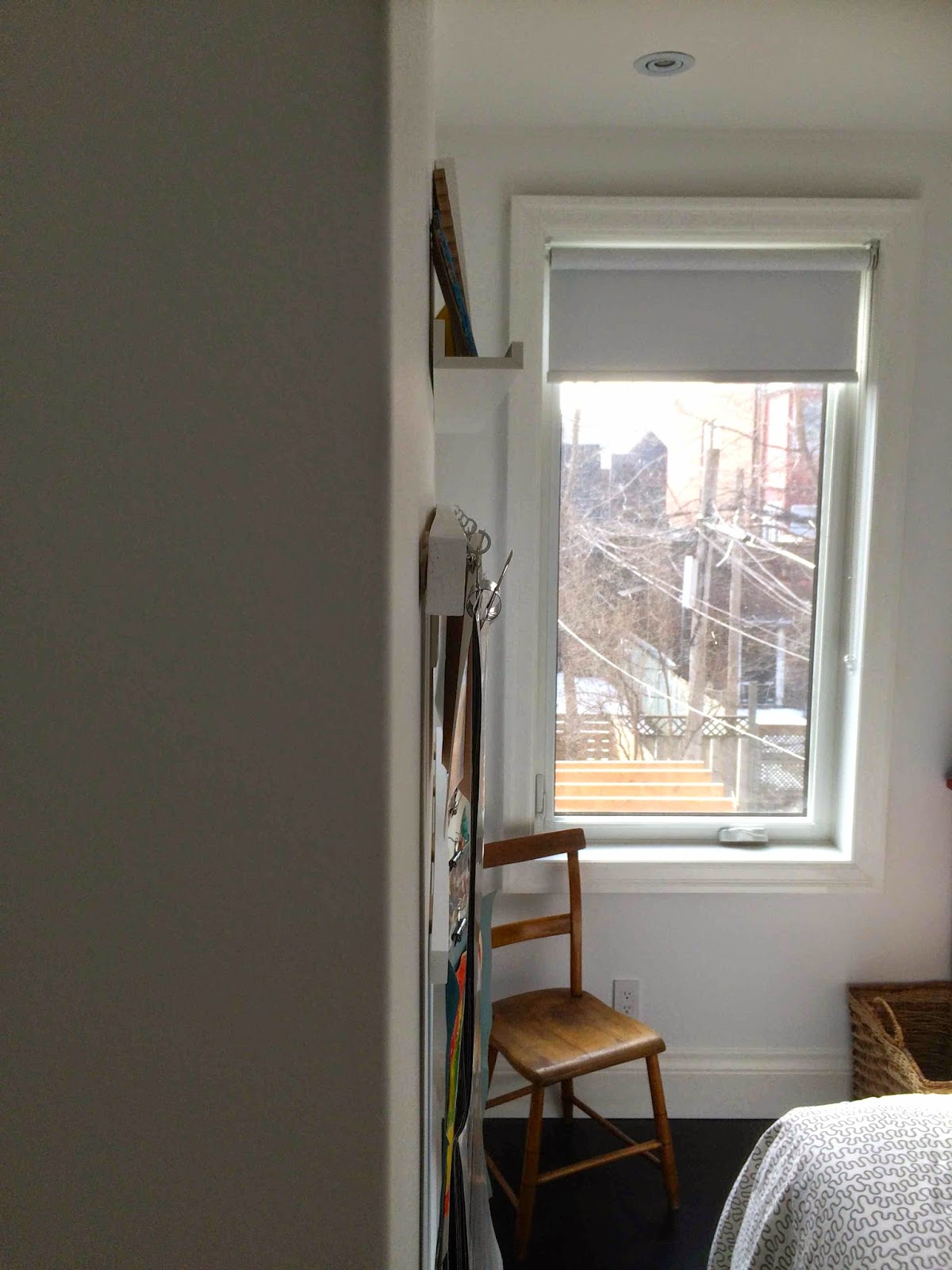 It's perfectly shallow enough for this wall in this room.  Because there ain't much space between the foot of the bed and that wall.  There's enough.  But no extra.  It's perfect! 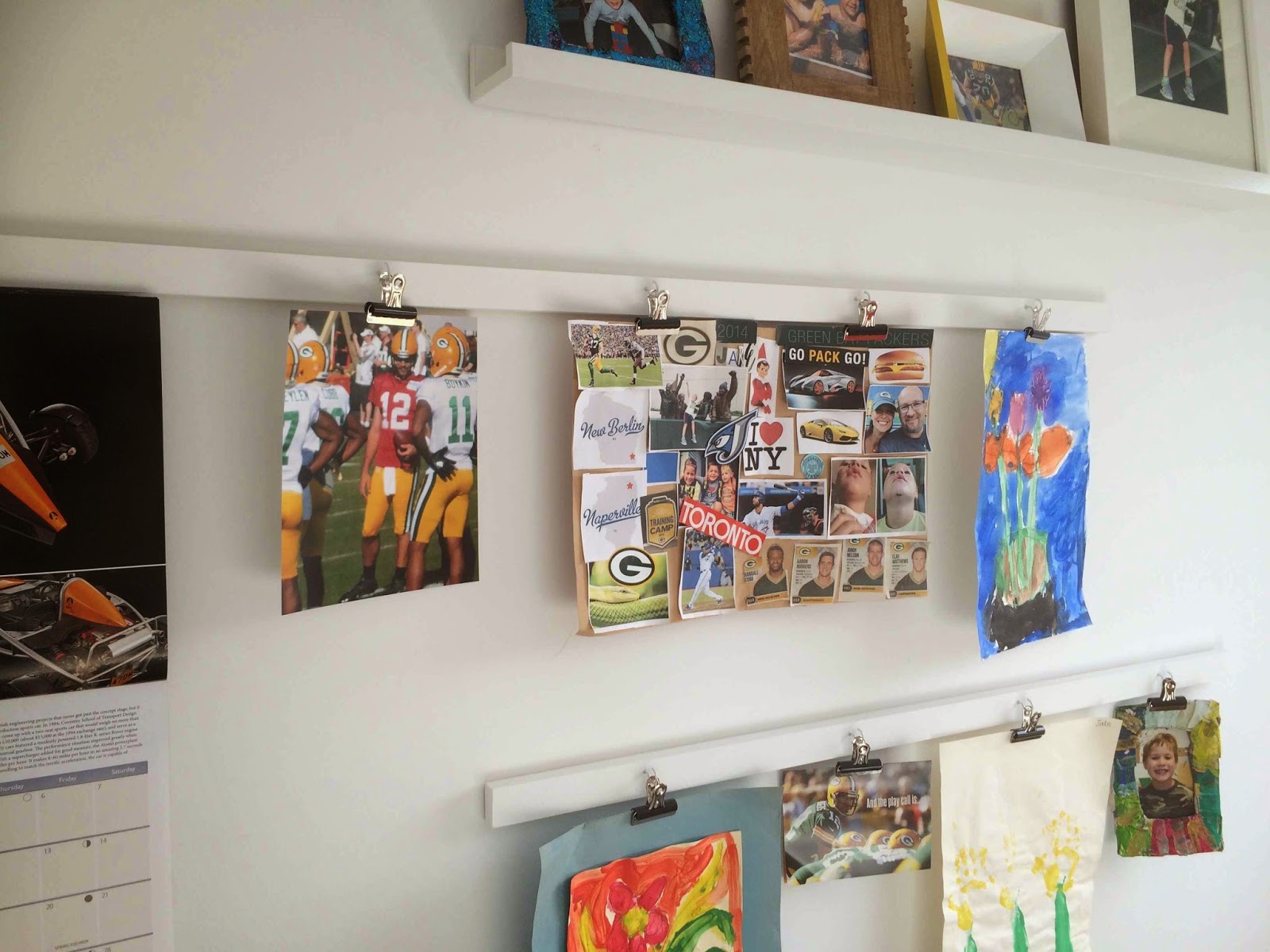 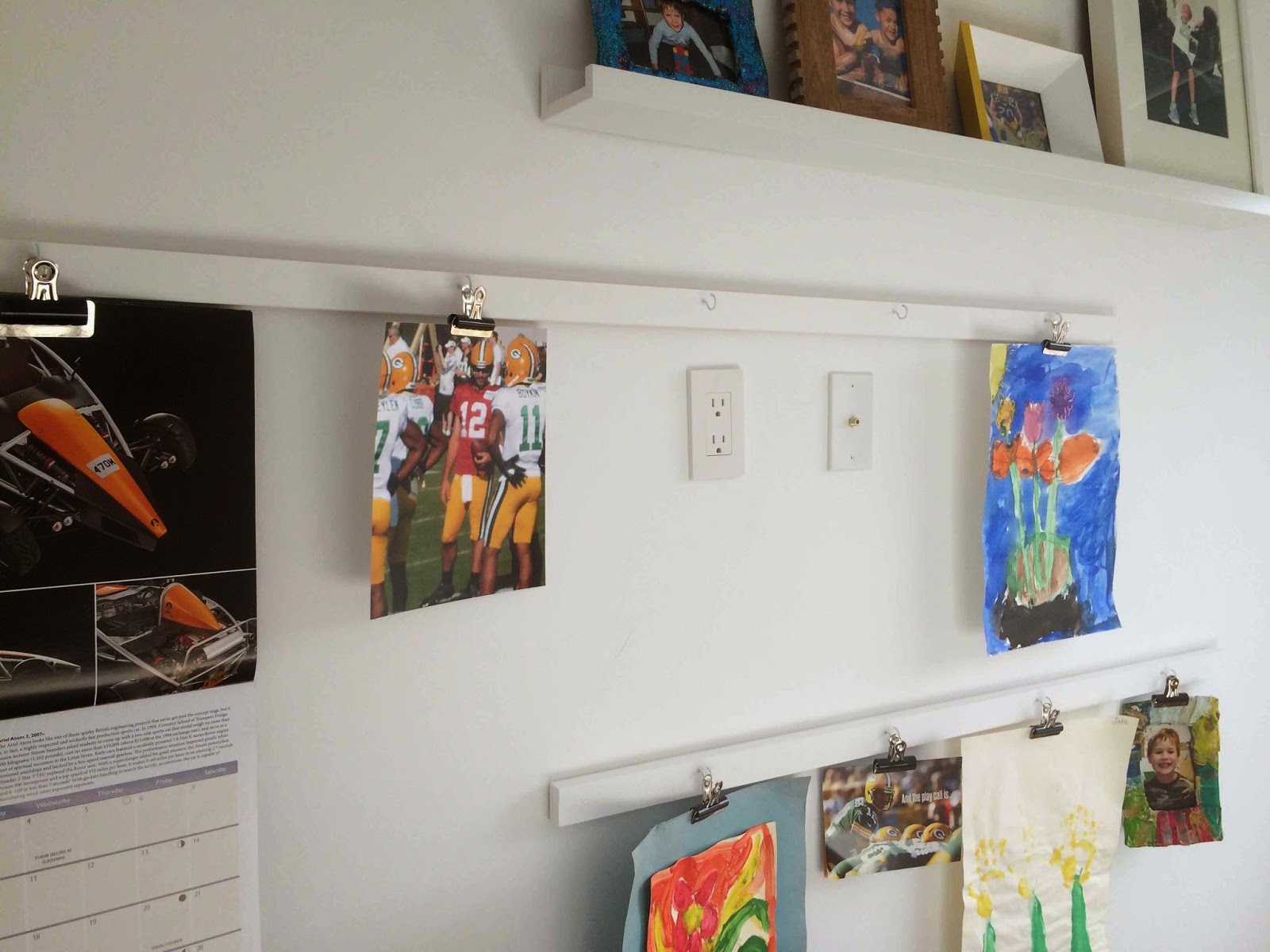 It perfectly hides the outlet and cat5 connection for a future TV.  (All our bedrooms have this now and it's dreamy.  The bedrooms on the 2nd floor have them in the middle of the wall instead of at the baseboard so we can mount a TV without seeing wires.)  I made sure to space out the hooks above them so a double-wide art collage can cover them. 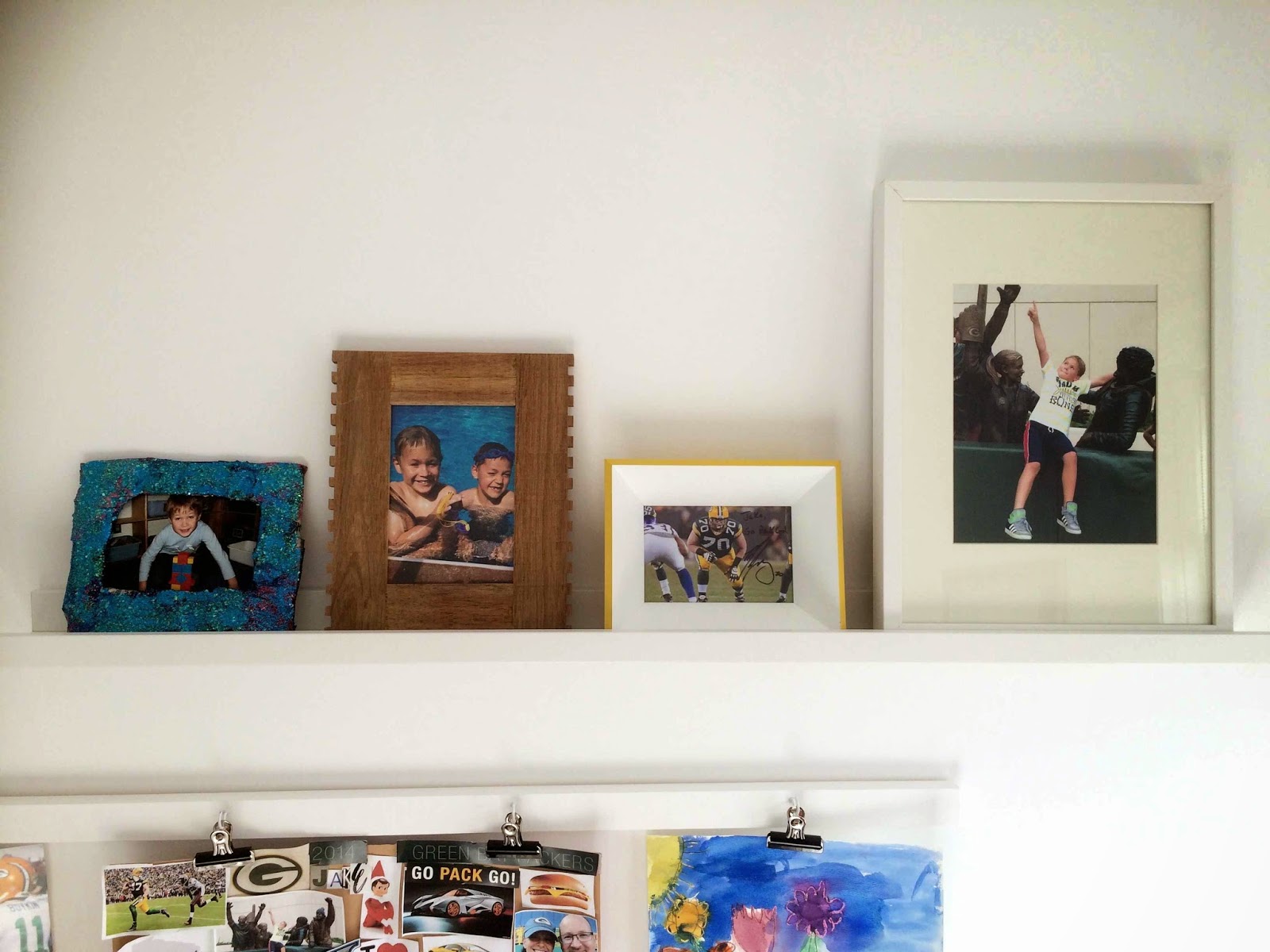 I chose the ledge because having framed photos is just as important as his art.  And he can change the pictures out as he wants.  But who's gonna swap out a signed photograph from #70 TJ Lang?!?!

Really.  Who's the monster here? 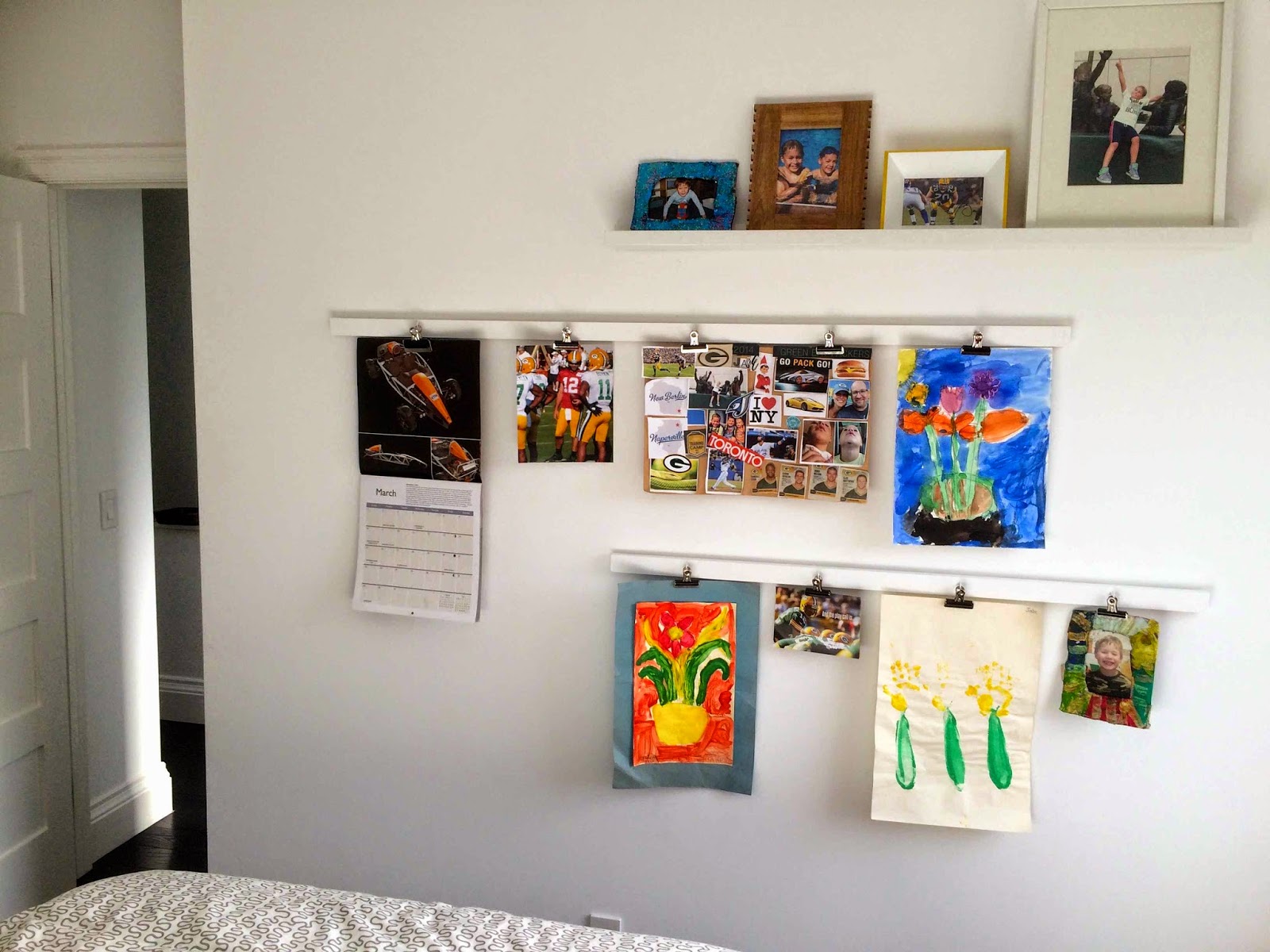 We still need to put something in that upper left corner.  I'm thinking a clock.  Something big?  Silly?  Modern?  He was thinking a Green Bay Packers wall decal.

It's a follow up to my last post on Jake's "new" room and the pictures he randomly taped to the wall.

Sometimes inspiration hits at the perfect moment.  And sometimes it works out so well, you need another post to show how you've used it further.  Stay tuned...!
Posted by Meg {lovingalbany} at 1:41 pm No comments: