That's the thing about renovating.  It's like getting a tattoo.  Finish one.  Think about another.  Suddenly, it's on your skin.  (Be it ink or demo dust)

For us, it was a case of necessity.  Our porch was falling down.  Not like tomorrow, but pretty soon after that.


Oh yeah.  Falling down for sure.  Even photobomber George thinks it's pretty bad.

We are lucky, as semi-detached homeowners, to not only get along with our shared neighbor, but to take on exterior home improvement projects together.  We replaced our (rare in the Annex) parking pads together in 2006.  And at that time, we decided to build a single staircase with railings, too.  Best decision ever.

But two major renovations for us, one rotting railing for him and a sagging century-old porch structure that supported a basement dig later...?

Thank goodness we knew a certain trusted contractor who could help us out.

So, after I left for summer vacation with our kids, they got to work.


Oh. My. God.  We gutted two entire floors of our house and found fewer problems than the front 160 square feet that we call a porch.  Rodent -squirrel- carcasses, urine soaked drywall in the ceiling and rotting chewed up beams (thus the sag).

And we were hoping to save the roof.  Ha!


This is why I love our contractor and his guys.  They're only interested in doing it right.  One could look at it as 'job creep', but he knows it's our forever house.  And our neighbor's side was in worse falling down shape than anyone could have predicted.  So...a totally brand new porch it is.

With proper brick pillars that are a) able to hold the weight of the new forever porch and b) in keeping with the neighborhood.  Sold.

Then I came home to Toronto for a weekend.


This is our side.  I can't wait to share the little life-altering upgrades we're making.


View towards the neighbor.  Same upgrades there.  Kid-barricading divider to come.


This is as far as things got while I was home.  Which was perfect timing, because I got to see the progress and make some important decisions about structure, electrical and finishing.  I'm not used to being gone while work continues...but that's why my better half is there.

And thank goodness it's just him instead of this guy.


My father would be out there every hour of every day, if he could.  But I brought him back to Wisconsin with the kids and I.  Let those guys do what they do best!!!

Stay tuned for those upgrades, the new porch "look" and pictures of the progress :)
Posted by Meg {lovingalbany} at 12:47 am No comments:

Email ThisBlogThis!Share to TwitterShare to FacebookShare to Pinterest
Labels: porch

The difference between home in Toronto and here in New Berlin is...well, everything.  Just completely, totally different.  Country, population, landscape, density - it's all opposite.

But the biggest difference we've noticed is the wildlife.  Yes.  Wildlife.  These city kids are astounded.

For example, every single night, these are in the backyards.


It's gotten to the point where the kids who used to say, "Mom! Look! Deeeeeer!!!" now just say, "Deer again."  How quickly city boys are jaded.

But what astounds me is the long list of wildlife they've seen in 2 weeks that they've never seen in the city in their entire lives.  Such as: a muskrat, hawk, cardinal, frog, woodpecker, rabbit, owl, daddy long leg spider, a doe and her fawn, a million lightning bugs, a bird fly into a window and take an hour to recover in the grass, and...

All of these in nature, near the house, mostly in the backyard.  I should add a reported coyote sighting by the neighbor, but we won't go there.  Won't talk about last summer's grass snake, either.  I think you get the city vs country point ;)

I guess it's just me taking growing up here for granted, and then realizing how truly amazing it is when I see it through my children's eyes.

To be honest, we've seen more animals than this.  But we cheated.  At the zoo. 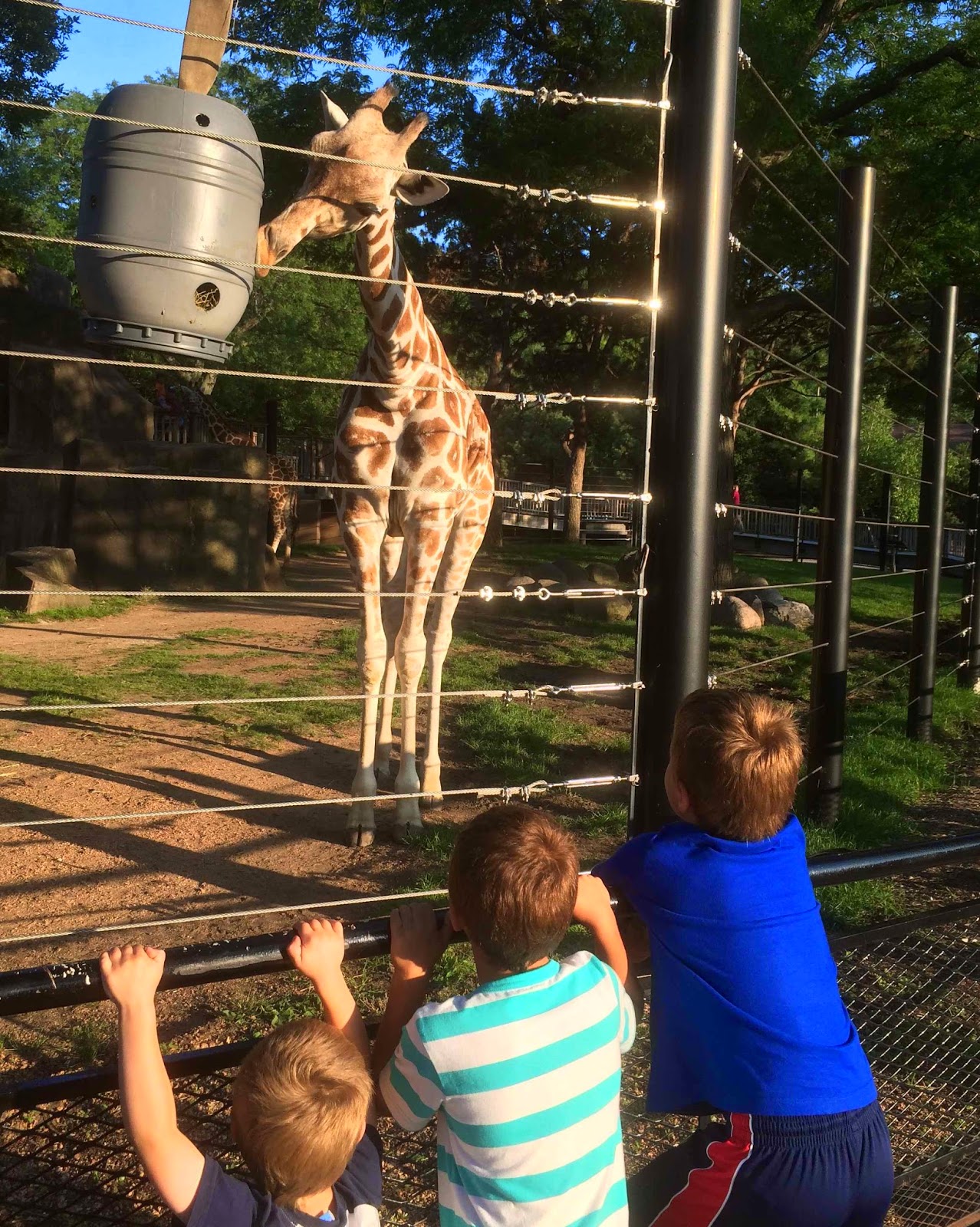 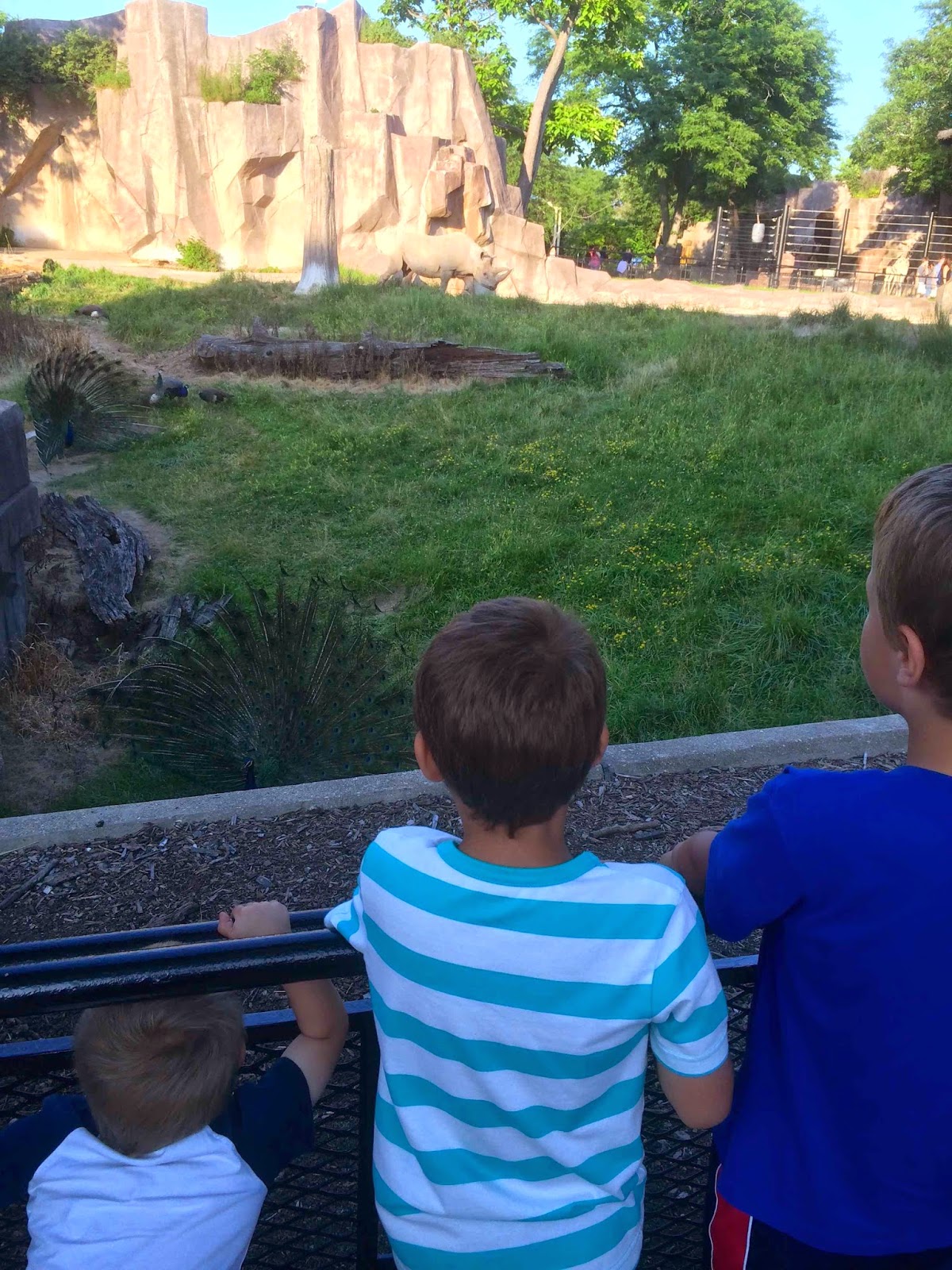 Ten points for the person who can spot the rhino, hawk and peacock in this picture.  I know.  Me either.

Hooray for city kids having a "country" summer.  Maybe by the time we go back, they'll be excited to see squirrels, pigeons and raccoons-who-aren't-afraid-of-people again.

Today is the 8th.  But I'm still reminiscing about our fun on the 4th.  So good!

When I met my Canadian husband, I made it clear that I'm an American through and through.  So he's known from the start: 4th of July + American Thanksgiving = must do's for me.  And now with three dual kids?  He's outnumbered for life.

Each year is the same.  Hometown festival.  Park, parade, fireworks.  Except this year, the big boys are 8 and 6...finally old enough to enjoy two big days of activities.

The 3rd is all about wristbands and rides. 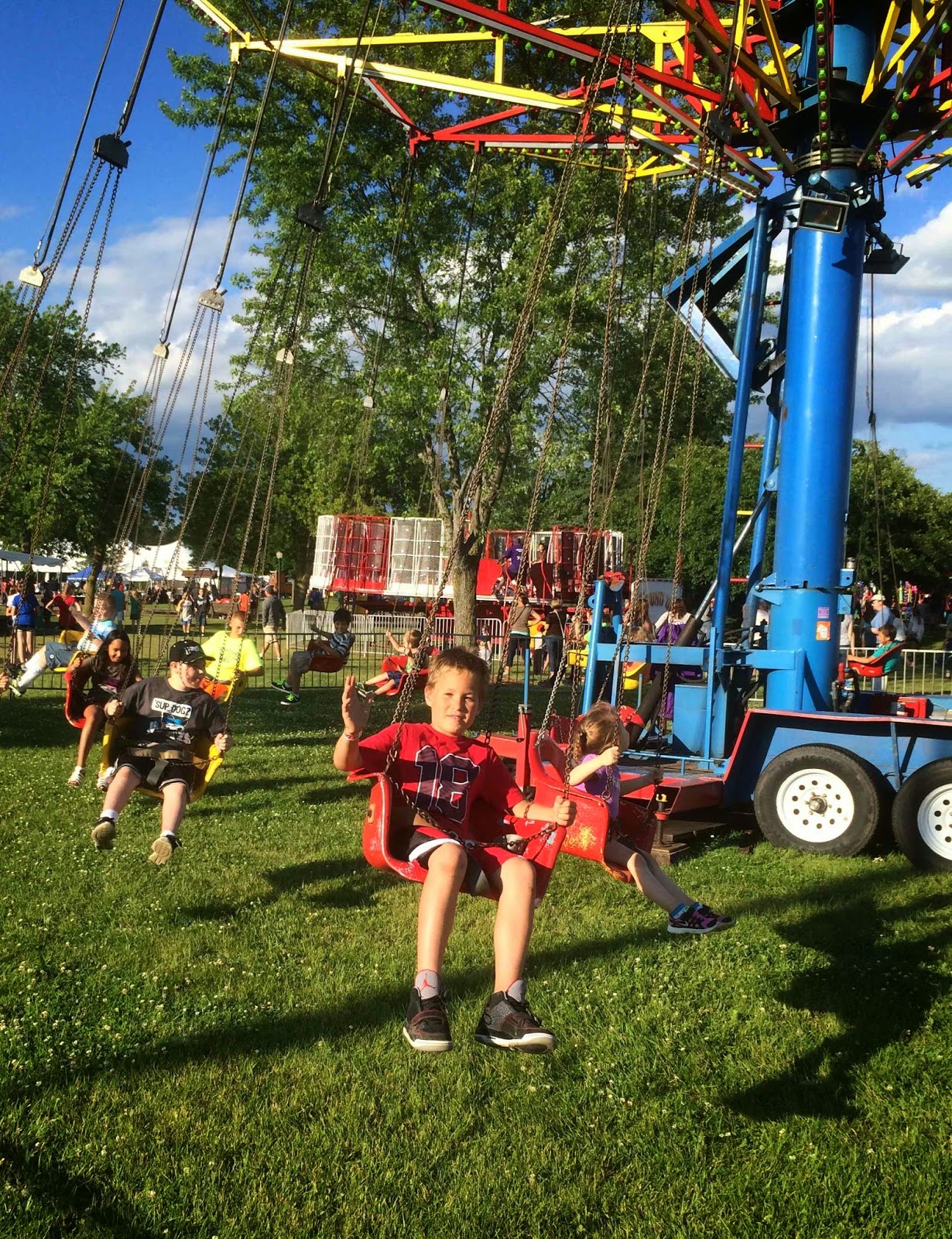 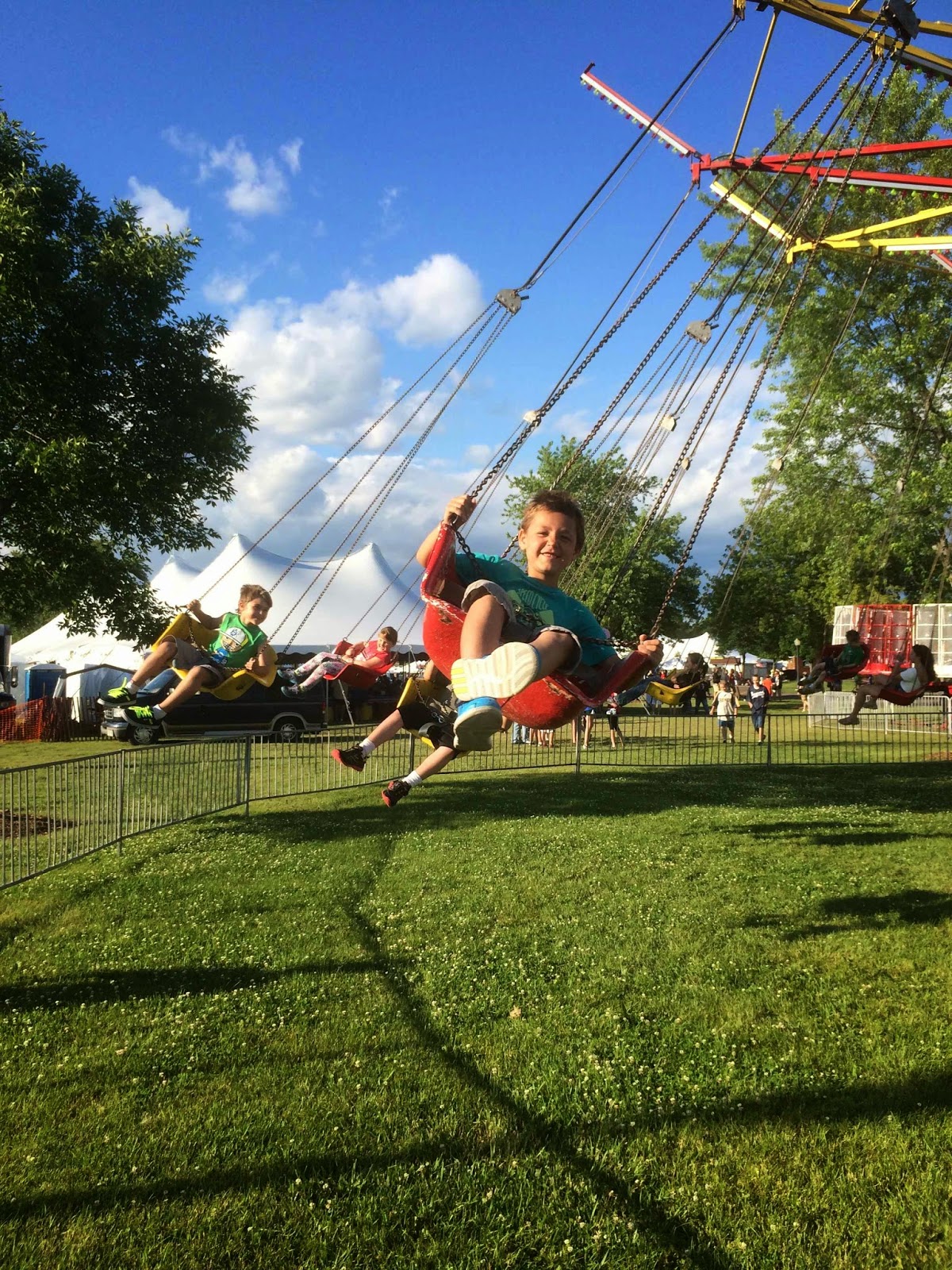 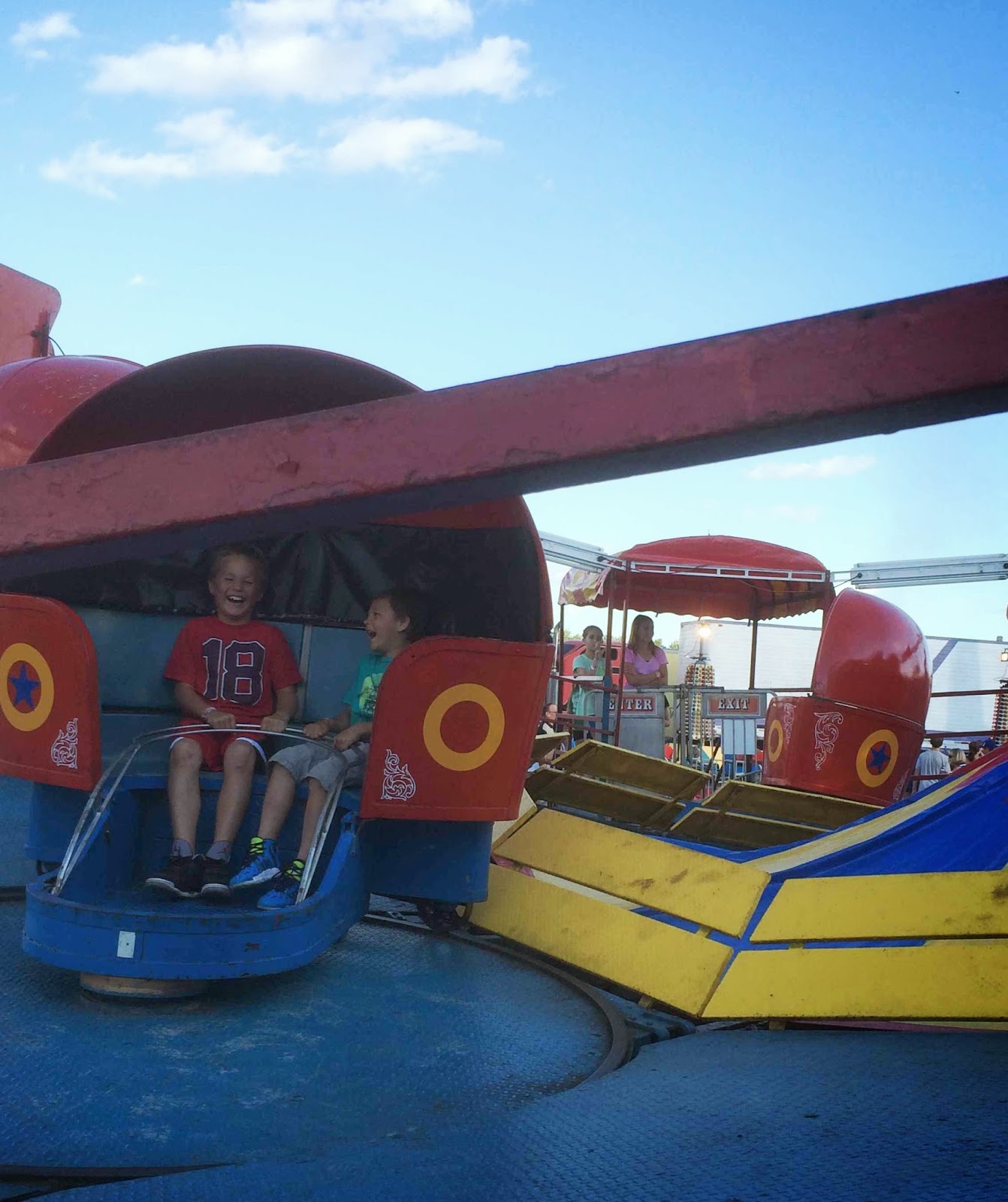 The carnival sets up what seems to be almost a week early every year.  And sells wristbands for all-you-can-ride nights leading up to the 4th.  Best $20 ever spent.


This shot is my fave.  It's like George is having the time of his life and even the ride operator is in on it.  Bliss.


This was not free with the wristband.  But he loves corn dogs so much.  It was worth the whopping $6.  And it actually started out double the size seen here.

I'm not justifying.  It is the truth.  And he ate every crumb.

Then the big boys did something new this year.  They stayed at the park (after riding 937463928374 rides) for the late night "flashlight candy hunt".


Three adjacent baseball fields are covered with candy in the outfield.  The lights go out and the kids run with flashlights.  This year was our first time, since it doesn't take place until 9:30pm.

The 3 year olds would be throwing tantrums by 8:00.  But these guys loved it.


All five grandchildren made it to the parade AND STAYED THE WHOLE TIME.  This is a first.  We were thrilled.

The hands over ears were deserved.  Because Wisconsin is the home of Harley-Davidson.  And our parade kicks off with over 100 of them.


But as soon as those go by, and we wait for the rest of the parade to catch up...


...there's a guy we know that makes an appearance.


He breaks order and high fives Jake every year.  Love.

After the parade, we go back to the park to drink more, eat more and roll ourselves out of there.  Until we return for these. It isn't the 4th without fireworks.  Until next year!!! 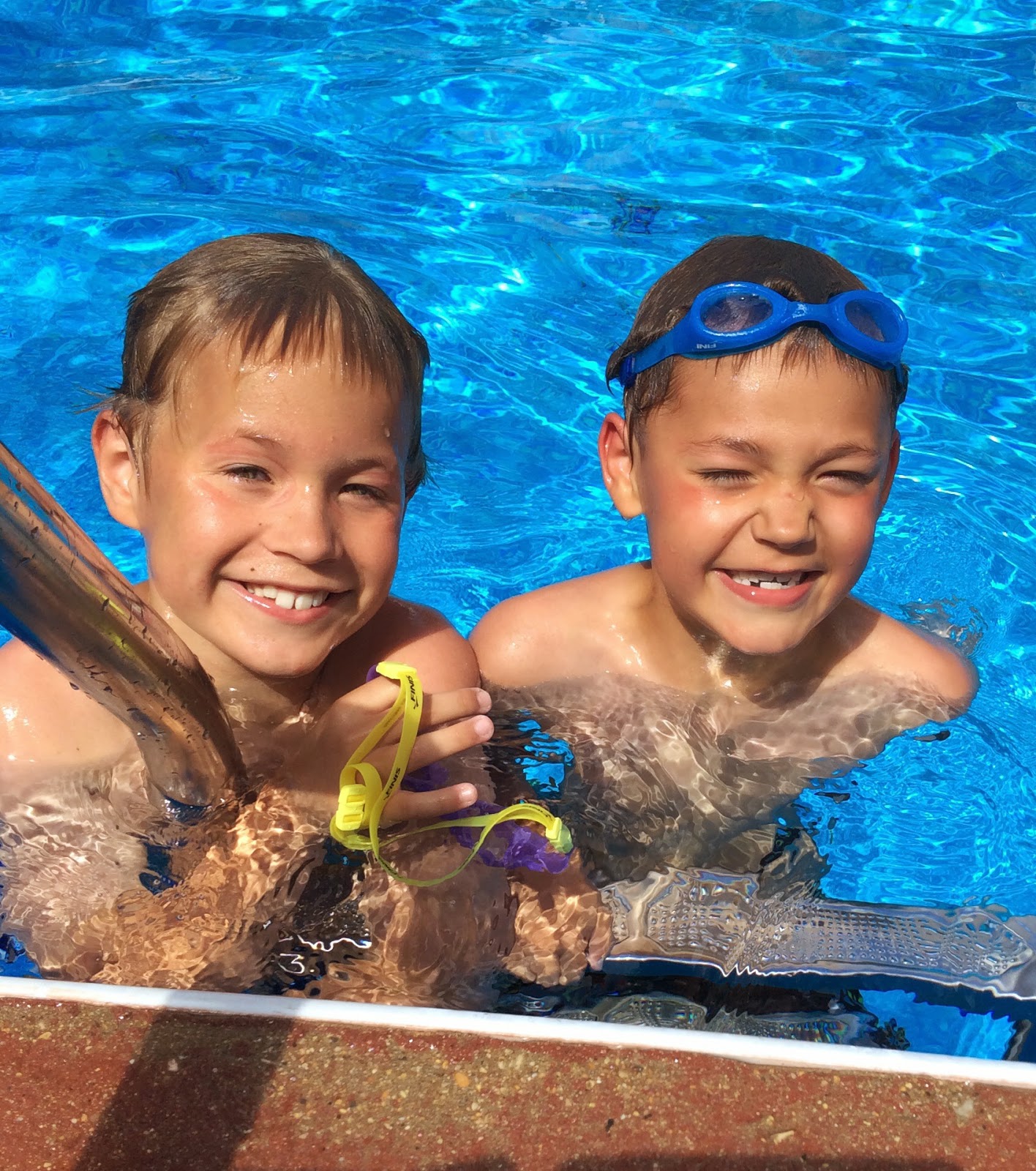 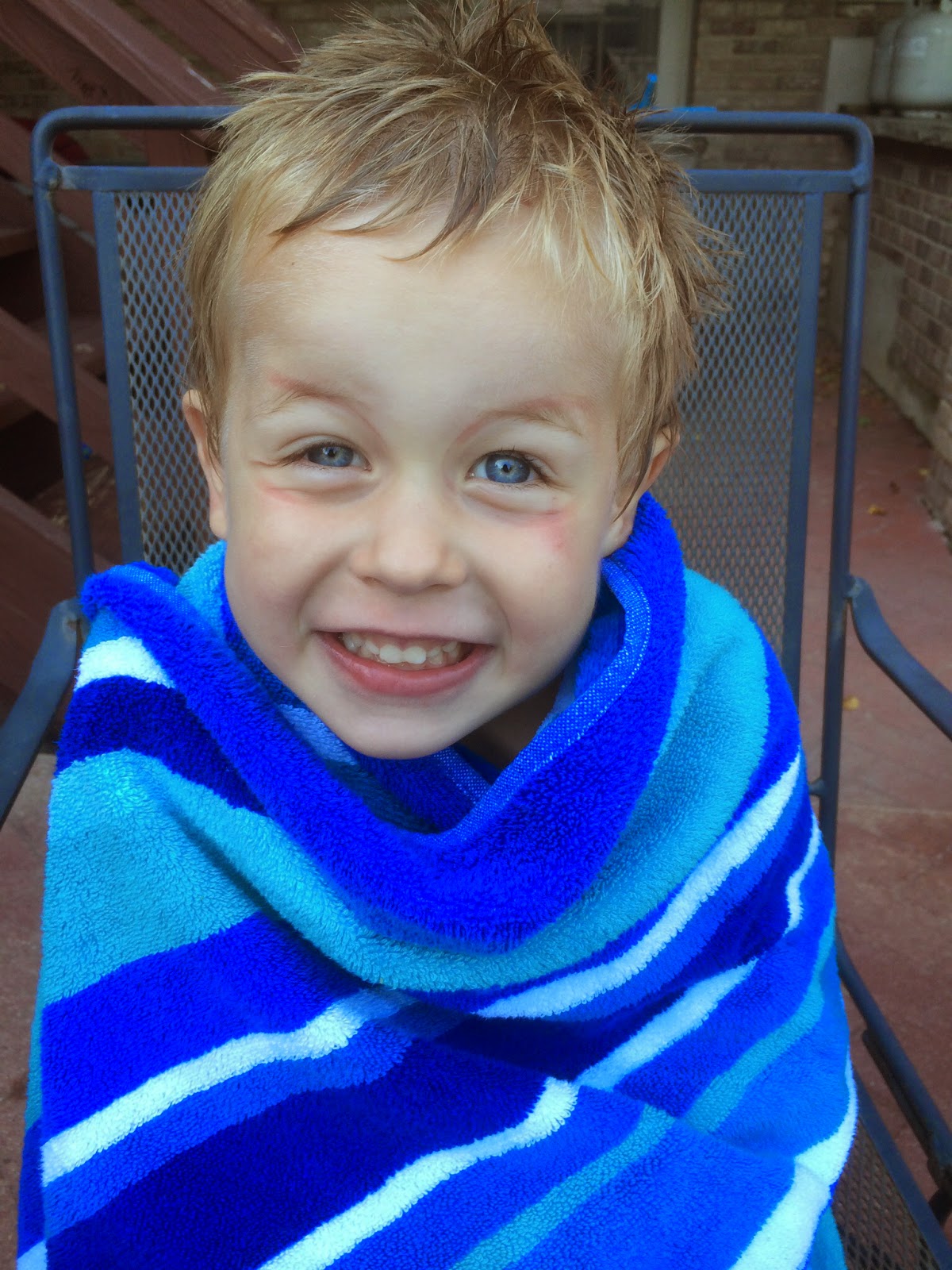