I've found something so inspiring, I feel like I'm living a lie.  It's a cookbook.  But I can't cook.  So it's perfect. 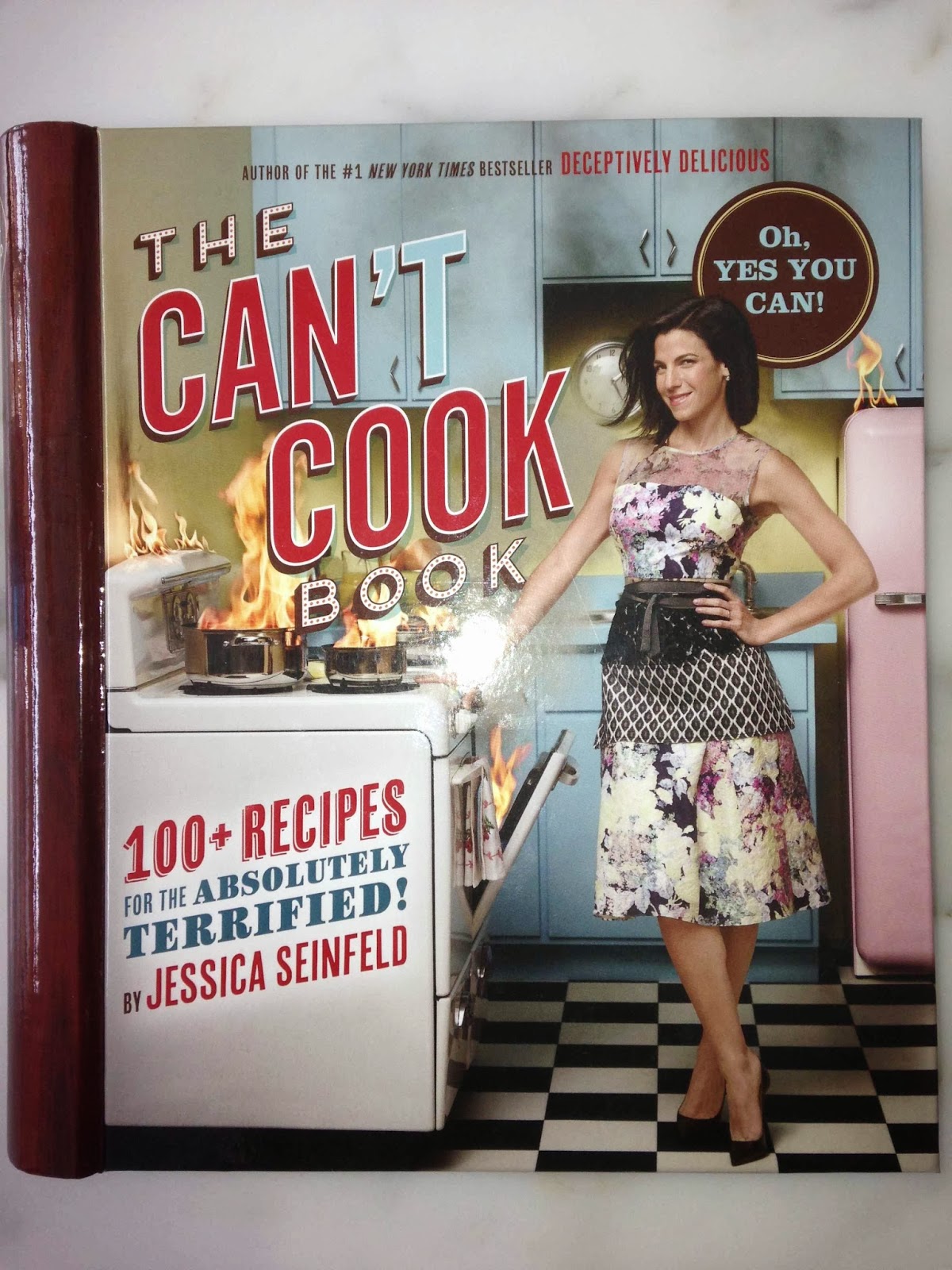 I'm not into celebrity perfumes, shoes or clothing lines.  So why would I be into this celebrity cookbook?  Just read that cover.

I am toooootally a can't cook.  I don't enjoy cooking.  I like to eat good food.  But there's not much else out there that stresses me out like trying to think of a recipe, prep all the food and then cook everything to deliciousness.

I would rather put together an IKEA Expedit.  The big one.  By myself.

So imagine my amazement, standing there in the big chain bookstore, when I decided I should buy this cookbook.  For me.  Steve couldn't believe it either.

Then I tried it out.


Actually, the real scene was more like this...I had to make them stop to snap a pic. 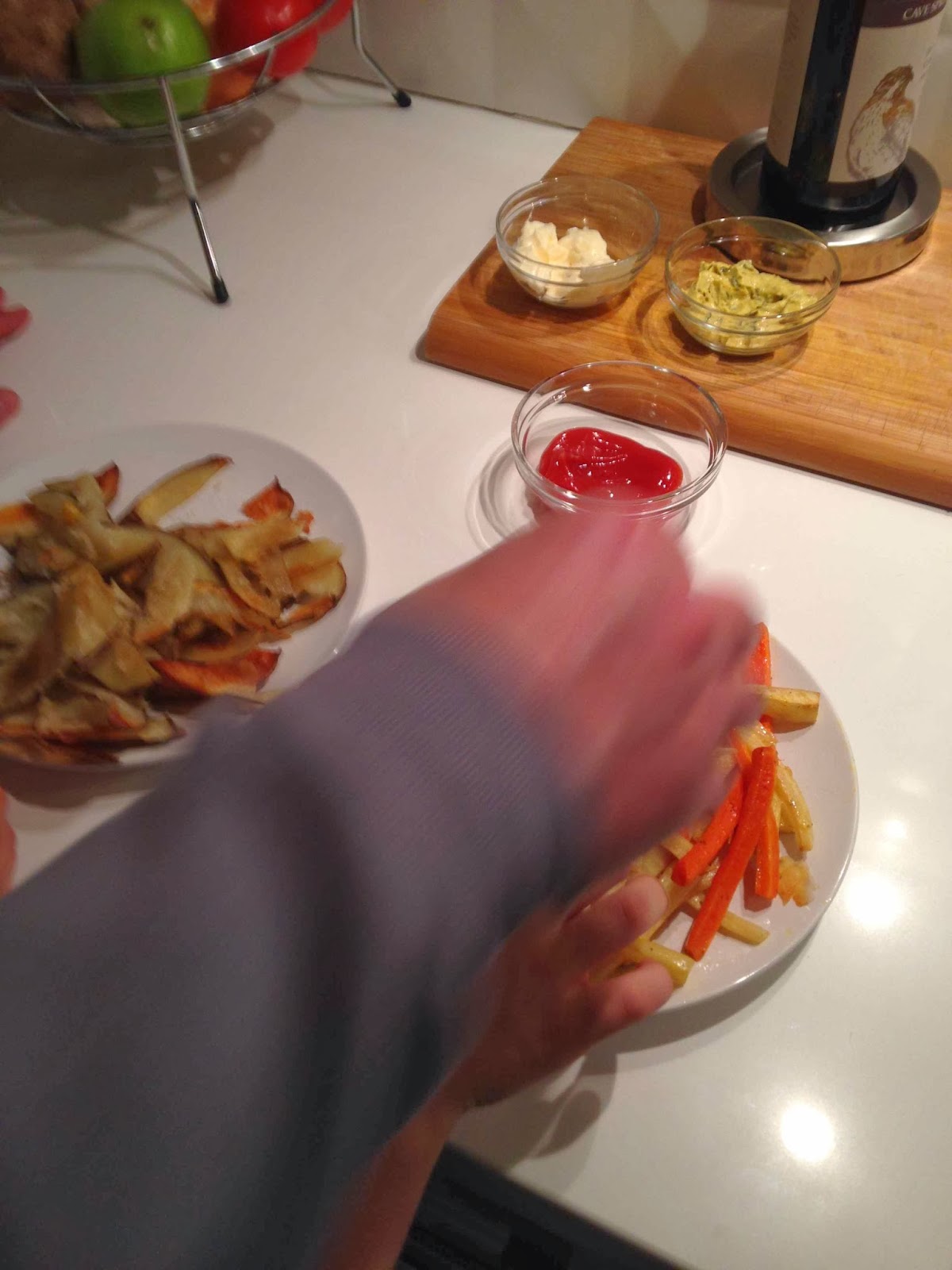 Super delicious!  And sooooo easy!!!  I even made her burgers to go with the fries.


Parsnips were gone first.  Then the potatoes, followed closely by the carrots.  I wouldn't have believe it if I didn't see it myself.

Since the purchase, I've successfully made 5 recipes (2 of them multiple times) on my own.  Which is key, because I'm married to someone who loves to cook.  And yes, that makes me even more of a can't cook.

But I can still make a cake and brownies!


The annual February birthday celebration happened last weekend.  Both boys couldn't have been happier.  Or scored bigger on balloons and presents. 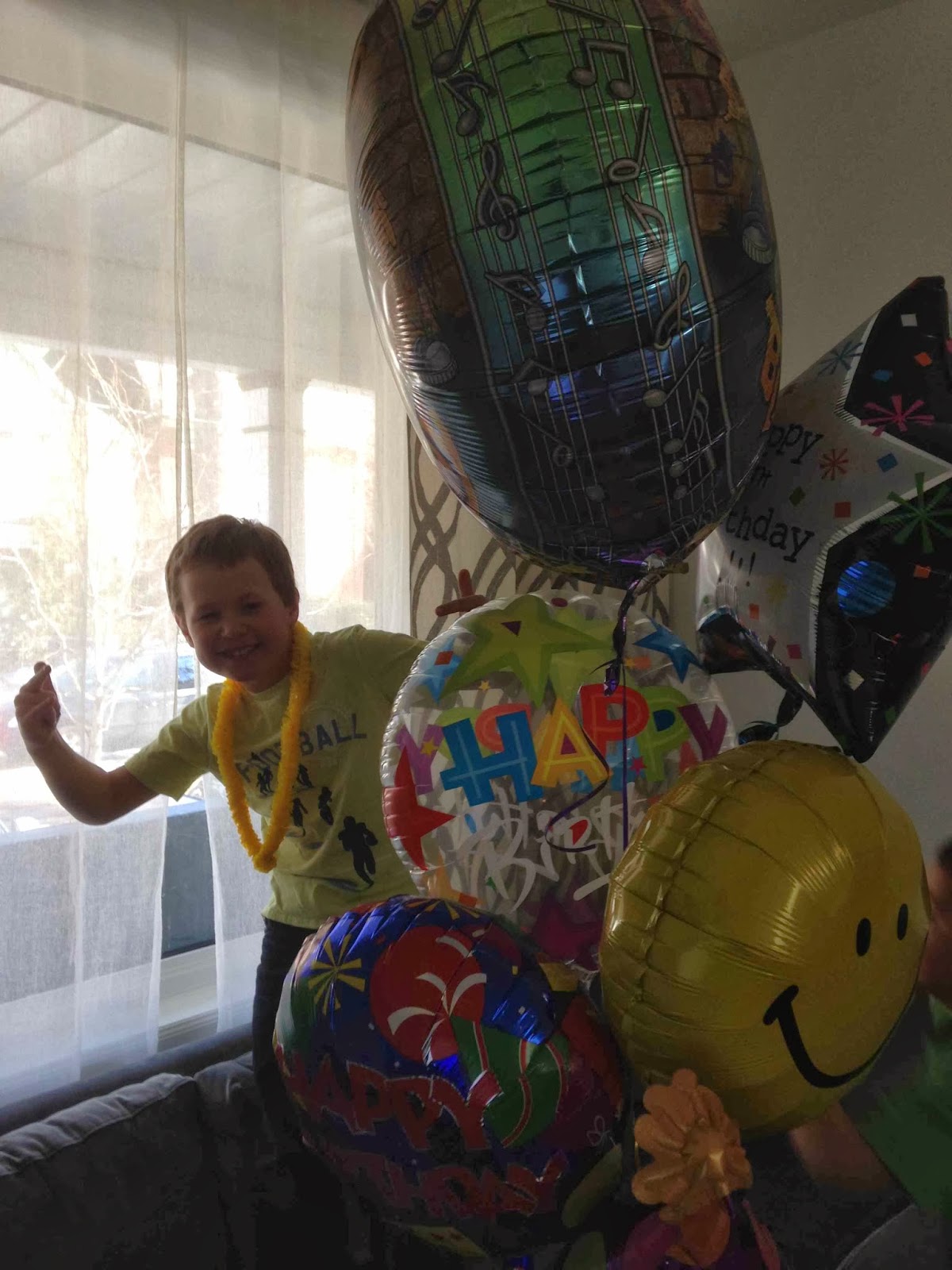 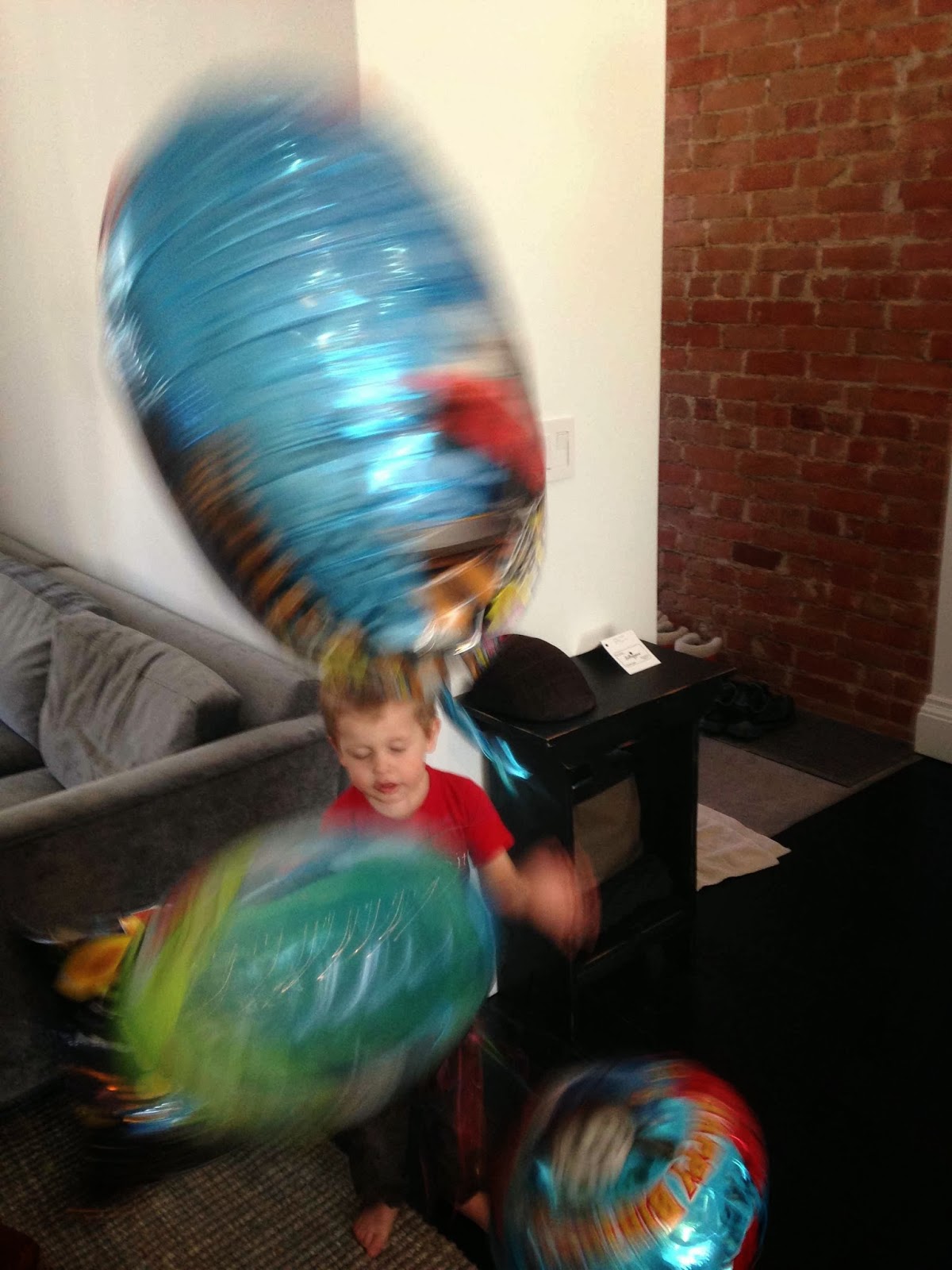 Neither could stay still with their balloon-o-grams from Uncle Joe, Aunty Peggy and cousins Charlie and Ben.

Every year those bunches bring smiles to their faces that last all day.  And those balloons can last for months. Which is awesome, because the biggest one in the bunch plays music.  (Don't tell him, but Steve said he's going to hide one in Uncle Joe's drywall this summer)

The biggest got a diamond hat he's been dying for and wheeled shoes he's been dreaming of.

The littlest got a package of 3 trucks and didn't care about any more presents. They were spoiled with Mimi (grandma) time all weekend long.  And loved it.


...and he found his love of Kale Chips.


I decided to make something healthy after the weekend of treats, snacks and too much vino.  But this can't cook couldn't keep up with the demand for her kale chips!  This is the only picture I have of the "wafers of life".  That was a sober comment made by my father.

And lastly, a little bit of fun around here.


We've started going poo on the toilet.  I'm a big proponent of toilet training late with boys.  It wasn't worth the fight with my eldest, so we waited until he was closing in on 4.  He did it in a weekend.  Same with the middle.  So this attempt is premature with the littlest...but is there anything better in life than flushing clean toilet paper?


Waking up from naptime, I saw this.  Guess who's getting a haircut this weekend?


And this: the ongoing saga of 3 boys sleeping in the same room, and me taking pictures of them sleeping.

It's official.  As of today, I no longer have any babies.  Because the guy that was a baby yesterday?   He's 3 today.


Actually, he hasn't been a baby for a while, I just don't know when it happened.  In this family, you stop being the baby when another baby comes.  But there are no more babies coming.  We're done.  So I guess that means he'll always be the baby.

Until his baby cousin comes over and then I just feel old.

So here's a look back on three years of baby life.

Can't wait for another year of fun with you.


Mommy loves you.  And though you may hate to hear it...

You'll always be my little baby G!
Posted by Meg {lovingalbany} at 3:44 pm No comments:

Email ThisBlogThis!Share to TwitterShare to FacebookShare to Pinterest
Labels: George

If you've found me through Houzz.com, welcome!  If you want to check out our feature, click here.


Being featured on Houzz.com is such an honor.  When we worked with Kirsten Marshall of Palmerston Design to put together our home, we pored through this website for inspirational ideas.  To think that someone might look at pictures of our house for their own inspiration is thrilling!

Not only am I proud to see my home there, I'm proud to see Kirsten's vision and Nuno's execution (our contractor from Caliber Group) highlighted.

Stay tuned for more background on the renovation, especially the kitchen.  It's the reason why we got a designer involved...and possibly our favorite room in the house!

Eight years ago, I took this picture.


He was 24 hours old.  I had no idea what I was doing, not yet in love like everyone said I'd be, and terrified to take him home. 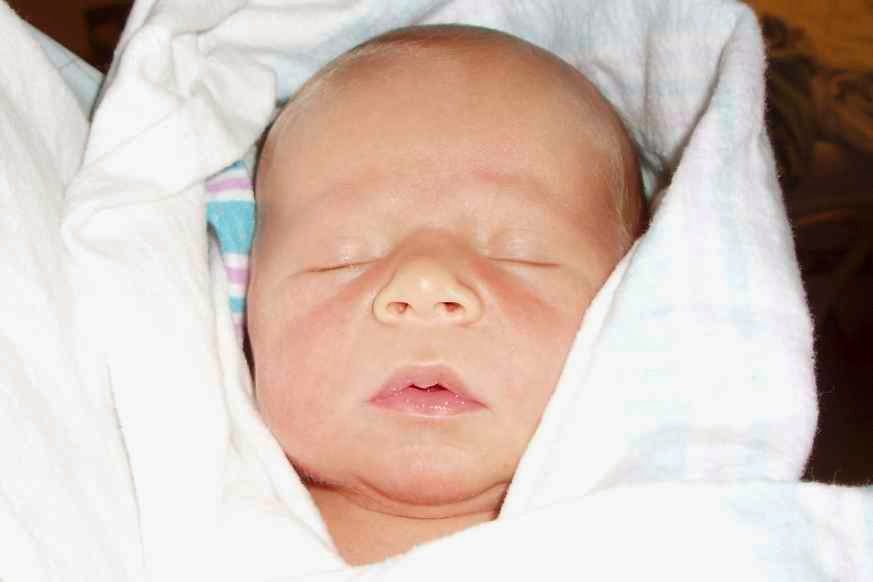 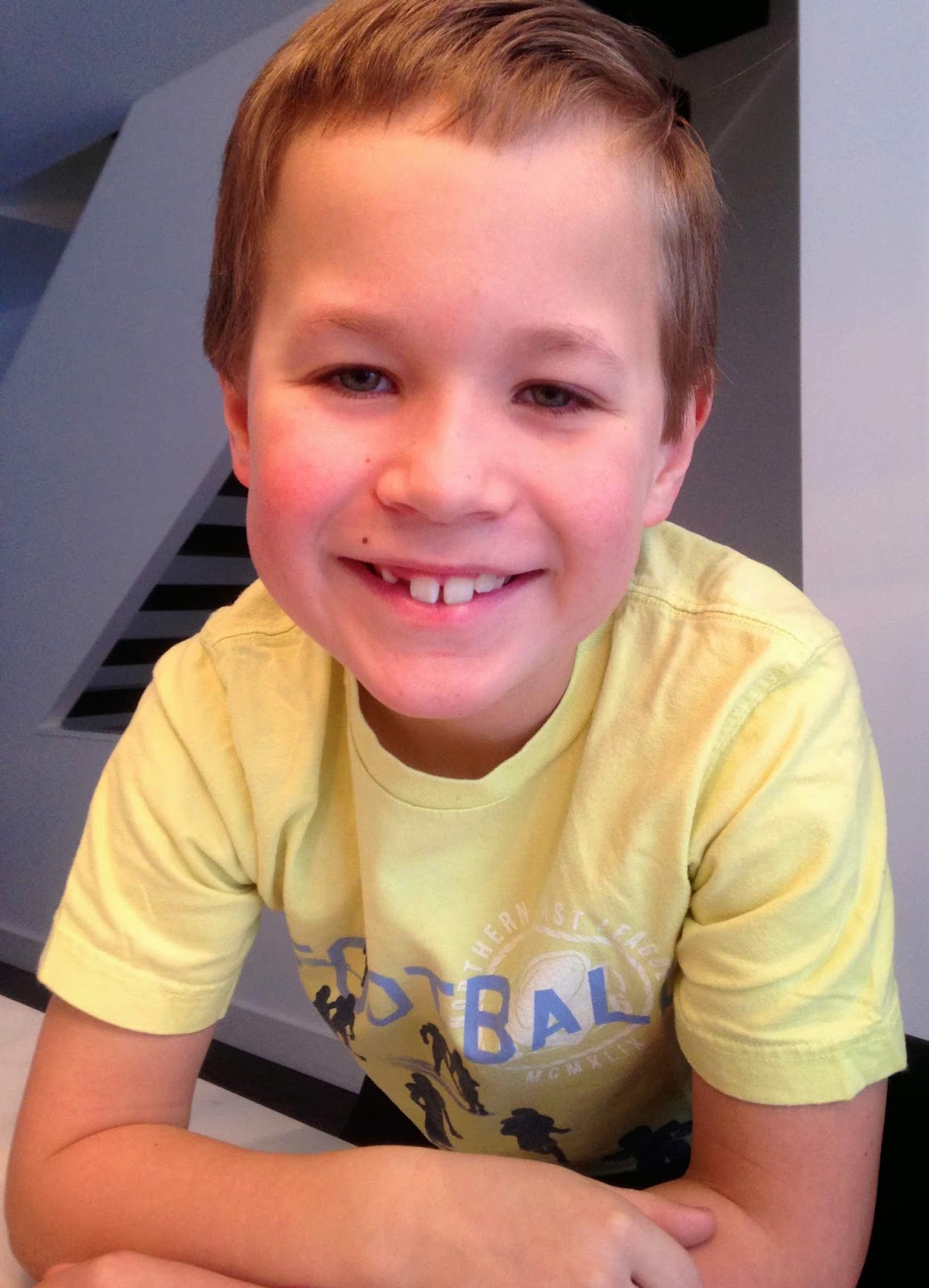 It's the total cliche.  The days are long and the years are short.  You blink and they're big.  Stop growing.

But I can't keep the world from turning. 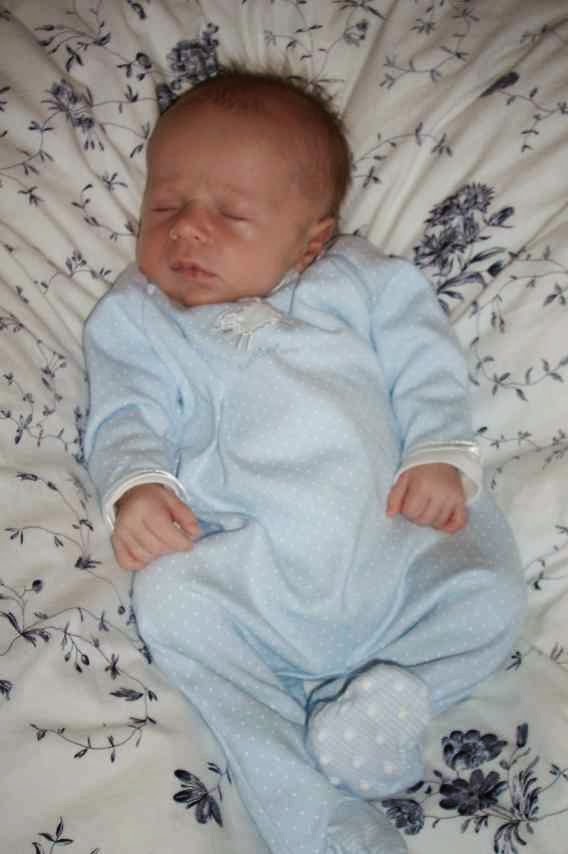 So we just enjoy the moments as they fly by. 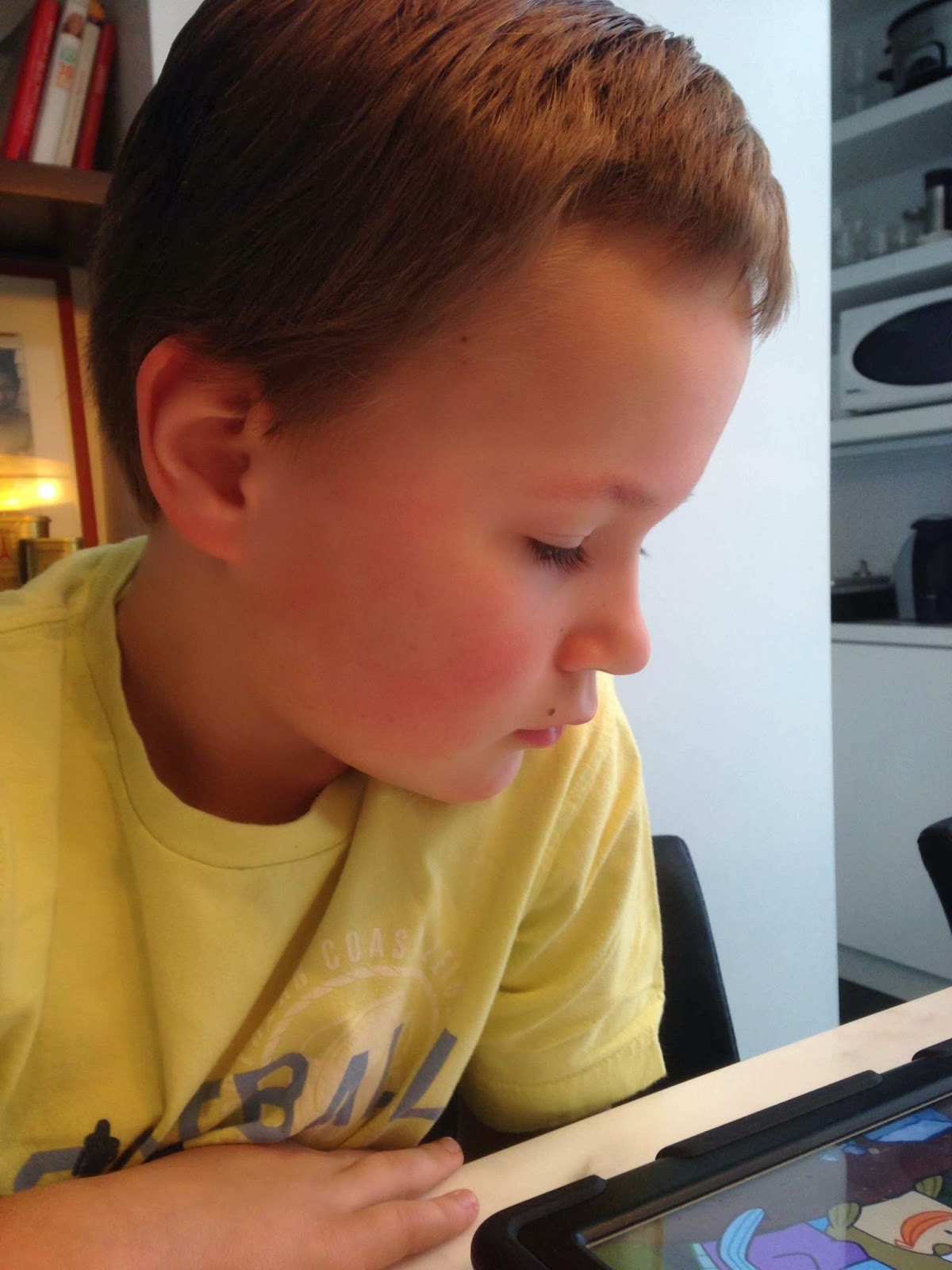 And make sure he chooses his birthday dinner for as long as he's ours. 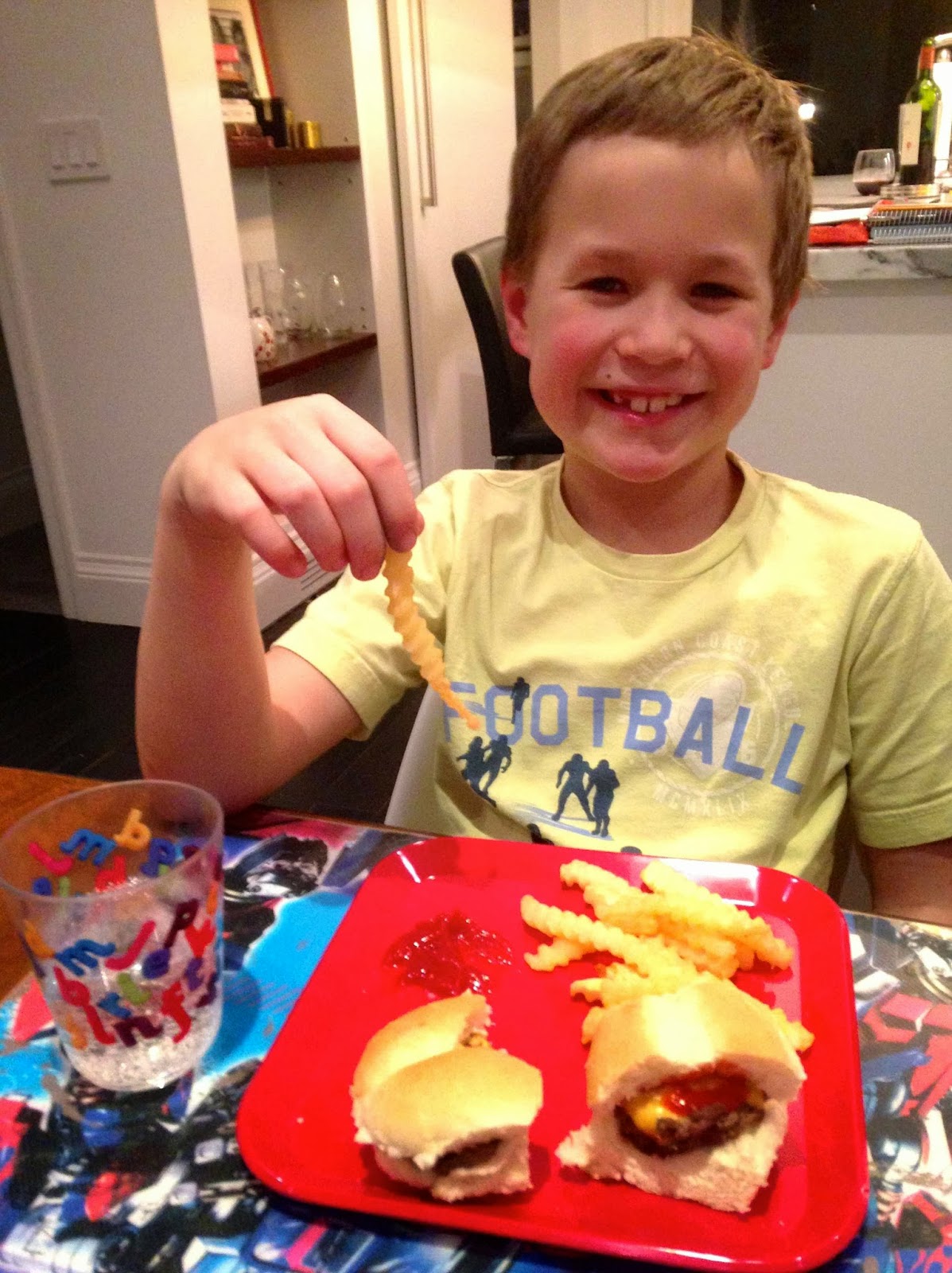 Daddy's sliders with fries and soda.  He said they're the best.

And so was that wine in the background...mom gets to celebrate, too :)

Posted by Meg {lovingalbany} at 4:52 pm No comments:

On the heels of decluttering, I did a little organizing.  And I did it with something this very white house has very little of...color.


I adore our closet if only because our previous one was horrifically small, dark and impossible on every level.  The IKEA Pax Tonnes changed my life.


Then I copied the drawer/shelf system they had in-store.

And wound up with this.  Jewelry that doesn't have a place in the box because it's worn too much, still in baggies from visits to my family back home, big and small, different colors...what!?

Then I went to Target. 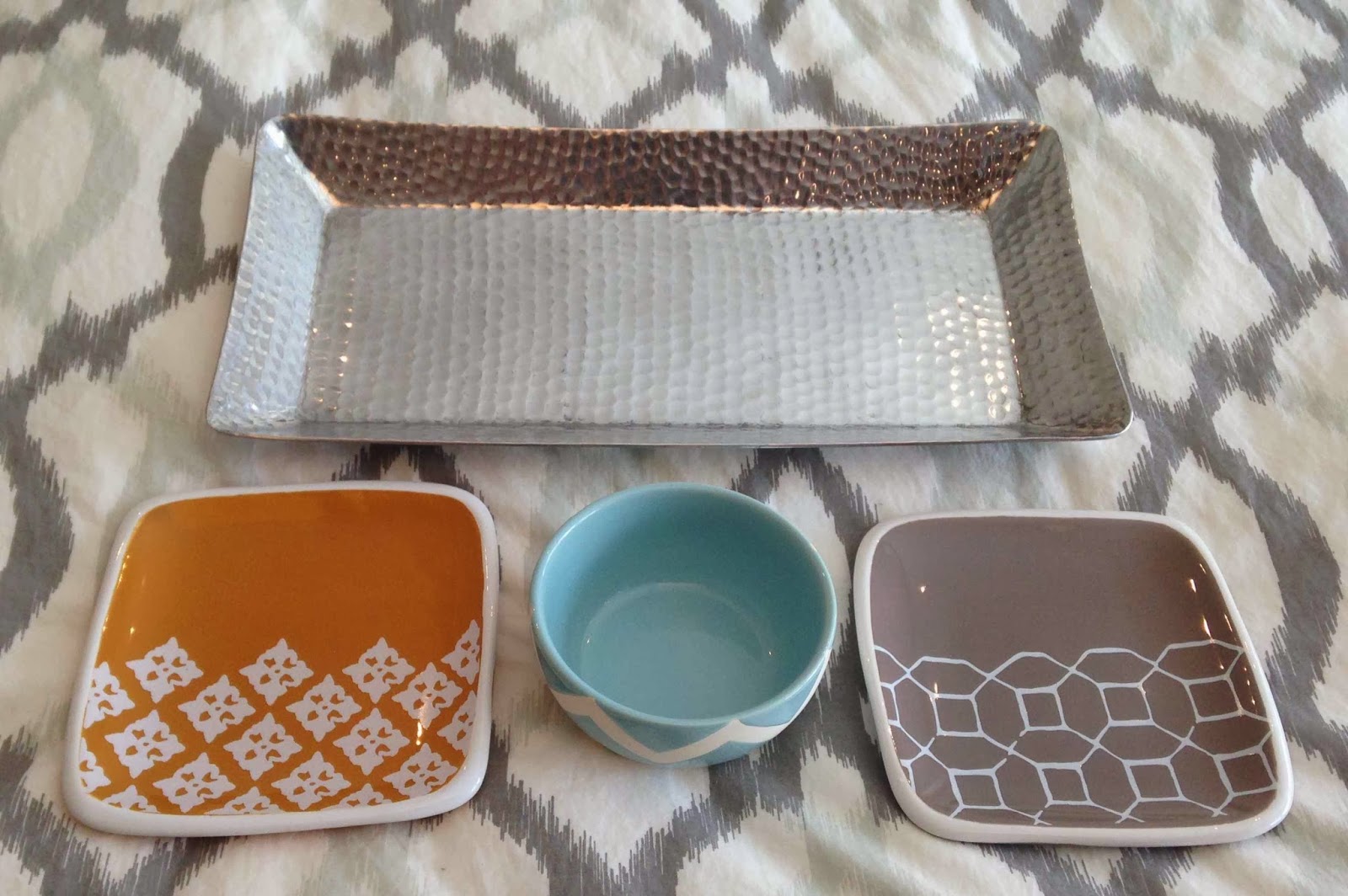 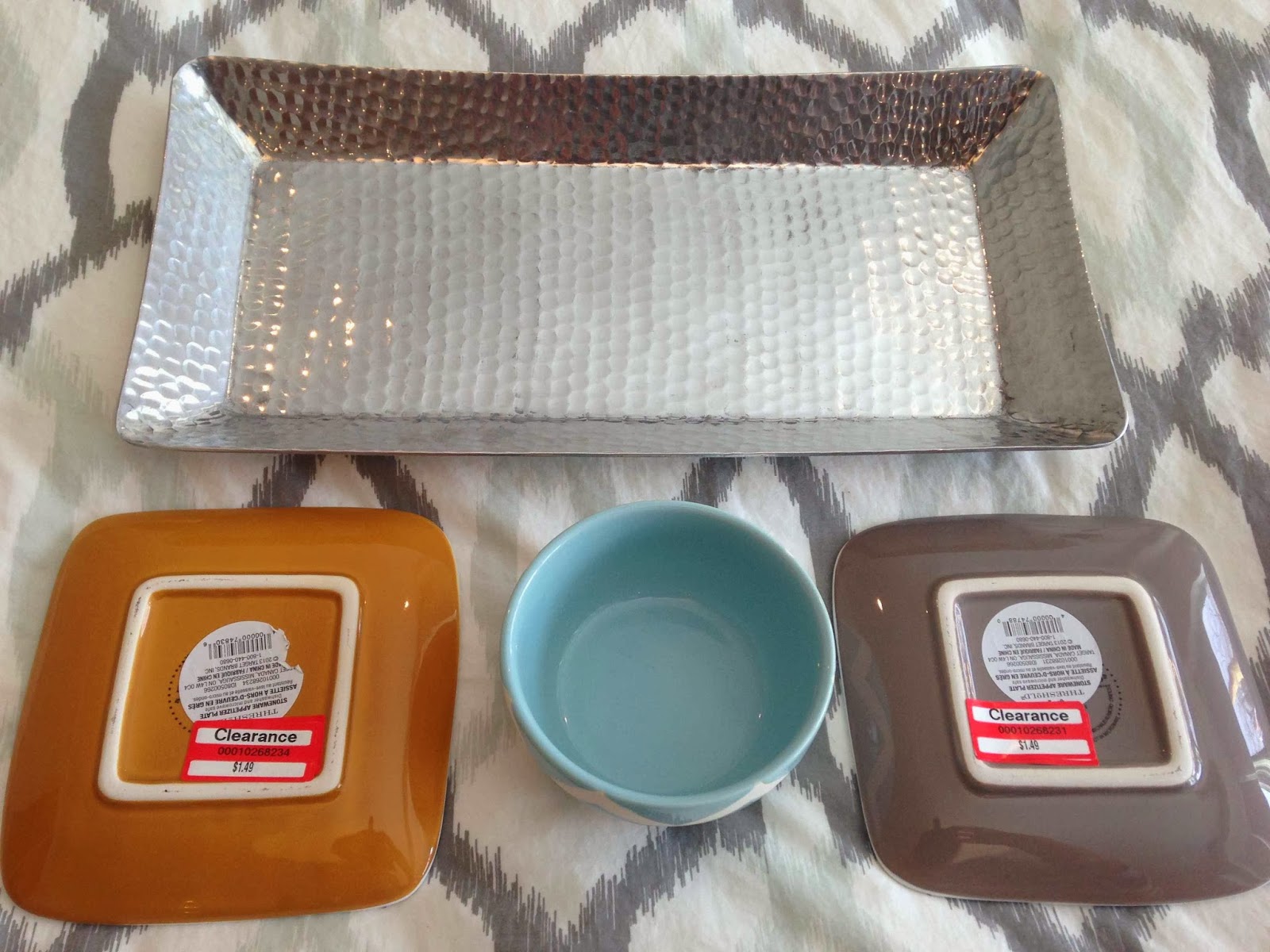 Metal serving tray (on sale), appetizer plates (clearance) and small dip bowl.  I didn't know I needed them until I got them home.


Hello.  Now I can see what to put on in the morning before I've even had coffee.


And the pops of color are necessary in February. 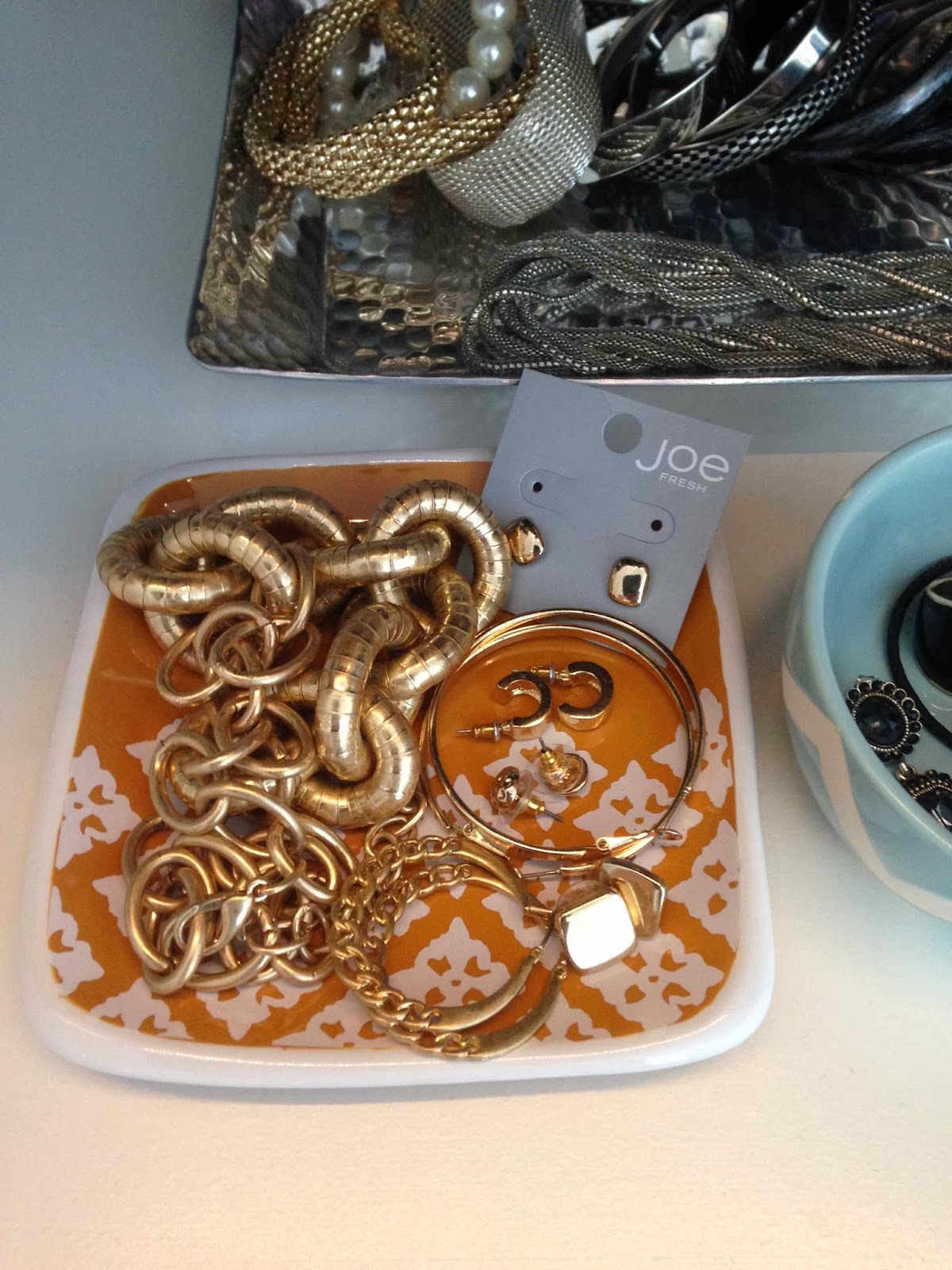 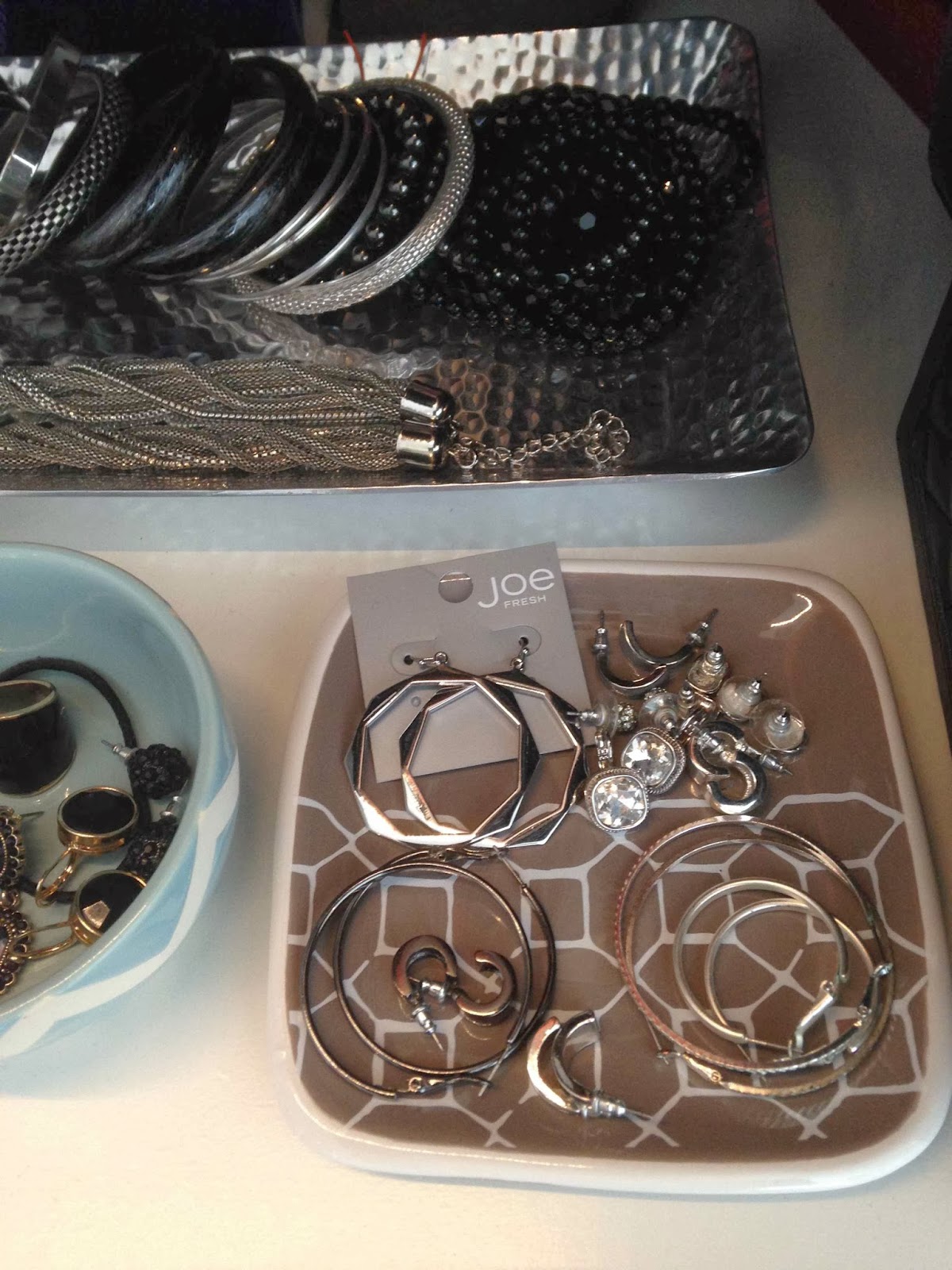 The gold/yellow and silver/gray color coordination was completely accidental.  I only noticed that after taking these pictures.  Unconscious OCD-ish?  Um, yes. 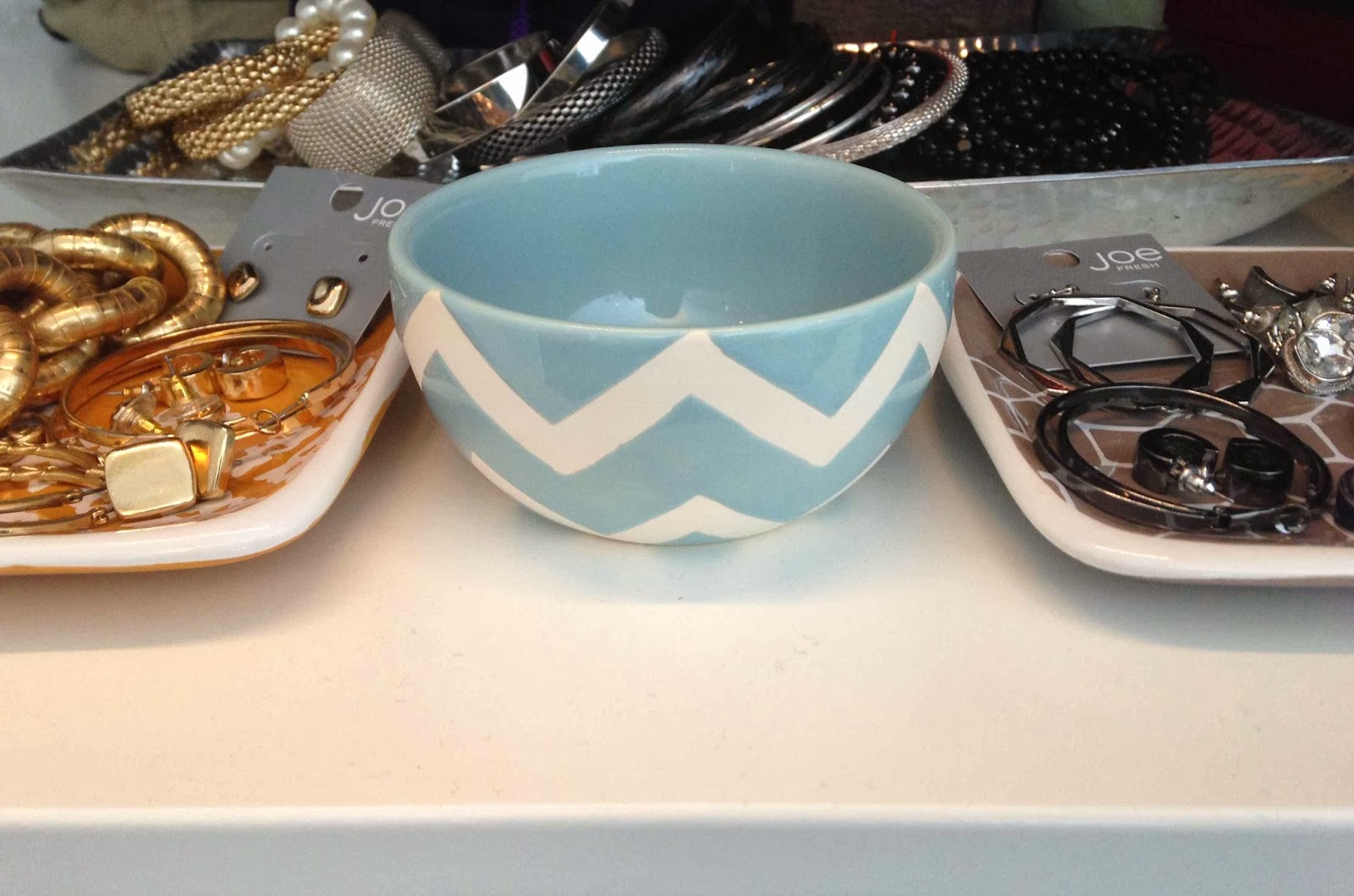 I may love this bowl even more than joe fresh jewelry.  And you can see that's saying a lot...!