How long has it been?  Too long.

I got a job!  A wonderful, flexible, perfect part-time job.  I love it.  It's hourly.  I work from home, I can volunteer at the school occasionally and I pick the kids up every single day.  Heaven!

But it's not very conducive to blogging.  Sorry, dad.

So now that I've explained where I've been...how about I show one of the (few) projects we've done lately?!?

Like I said, it's been too long.  Way too long.  Last summer, we demolished and rebuilt our porch.  Then we got as far as painting it...and stopped.  Which was fine - it was September.  The garden can wait.


Here's October.  Which is exactly how it looked the following April.  A bunch of dirt and some leaves.


Until last weekend, when the kids went to Grandma's house for a Victoria Day mega-sleepover!!! 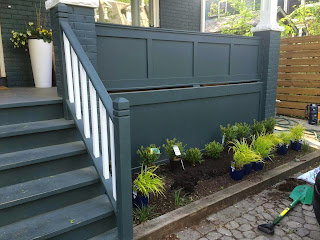 I decided to keep it simple.  No flowers.  Low maintenance.  Modern-ish.


In the front,  I chose a shade tolerant yellow ornamental grass.  Yellow, because it POPS in front of the green porch.  Shade tolerant, because the front garden gets minimal direct sunlight.

It faces east, so it gets morning sun...which the car mostly blocks since it's against our parking pad.  I learned long ago, don't fight the sunlight your garden gets - work with it.  So with any luck, this variety of Japanese forest grass should be happy here.

And if it's happy, I sure will be too.


Behind that, I chose a row of boxwood bushes.  This variety, "Green Gem", is different because it tolerates full sun/full shade.  I've planted other bushes here over the last decade.  Some have worked (hydrangea, variegated dogwood - kind of) and some have not (spirea, burning bush - never turned red in fall, and countless full-sun/part-shade perennials).  Sunlight has been the problem.  So finding a variety that can tolerate a full range of light gives me hope these will survive, too.

I stressed and slept on and changed my mind and revisited and reconfirmed my simple plan for two rows of bushes and grasses.  A few times.  Multiple times.  Then one more time.  But when the boys were gone and we had a few open hours, Steve decided to pull the trigger.


We visited our local nursery and almost fainted at the prices.  So right then and there, in the 'ornamental grasses' section, we googled a nursery outside the city and took a little trip.  Best decision ever.

Islington Nurseries had a variety of boxwoods in a smaller size (which were 20% off at the register - surprise!) and multiple containers of the grass at a better price than downtown.


Combined with the pop of color at the door in the background, I just love pulling up to our house.  The front garden is complete.  Finally!!!!